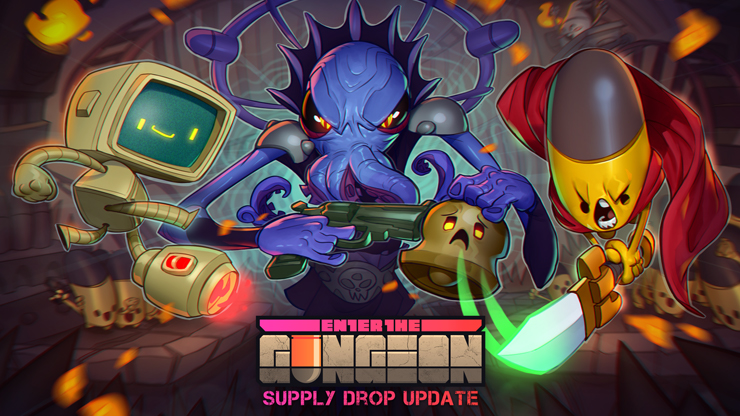 The Gungeon – The Gungeon masters of Dodge Roll Games and the profit enthusiasts of Devolver Digital have announced Enter the Gungeon’s Supply Drop Update, a shotgun blast of delicious Gungeon goodness right into your content hole.

The Enter the Gungeon’s Supply Drop Update will add over a hundred new rooms to the Gungeon that include new weapons, enemies, companions, bosses, and shrines for even the most seasoned Gungeoneer. Players will come across new guns like the Bullet Gun, a gun shaped like a bullet that shoots guns and those guns shoot bullets, and new companions like Ser Junkan who gains strength and power as you carry more and more literal junk with you through the Gungeon. Elite gunslingers will also be able to tackle unique pasts for both Robot and Bullet and an all-new boss – the Mine Flayer!

Enter the Gungeon released earlier this year to both critical acclaim and commercial success, selling over 600,000 copies in less than six months. The development team at Dodge Roll plans for another major update after the Supply Drop Update and a full-blown expansion early next year.

Enter the Gungeon is available on PC and PlayStation 4.