previous
Sponsored: Online gambling games is much more than it was few years ago
random
next
Who Cares if No Man's Sky Has No Story?
0 comments 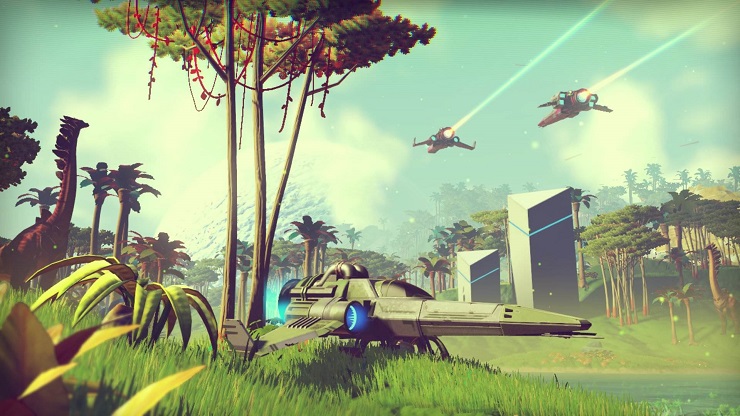 Over the past two weeks, Hello Games has treated us all to not one, but four new trailers for No Man’s Sky featuring different element of the game; if you couple these with all of the gameplay footage shown since the announcement, there are plenty of details for you to think about before the game launches on August 10. Read on to find out exactly what you can get up to across the universe of No Man’s Sky.

No Man’s Sky drops its players into a massive procedurally generated universe with nothing but a map, a ship and the goal of reaching its centre to guide you; with over 18 quintillion unique planets just waiting to be discovered and no story, you are completely free to go wherever takes your fancy along the way. Reaching the galaxy’s centre won’t mean game over though as you’ll still be able to keep exploring. Sean Murray, the Managing Director of Hello Games has said that new items or mechanics may become available after achieving that goal. Each of the planets you decide to visit will have a unique climate and ecosystem with creatures and plants that, chances are, you won’t have seen before. Beacons can then be found on each planet to access the Atlas: a mainframe where discoveries are recorded and money is received as a reward. Bonus points if you’re the first person to find it too because that means extra cash, and you get to name it for everyone else. You’ll also come across resources to mine, caves and buildings to investigate and mysterious relics to discover.

While many of the creatures you encounter on your journey will be peaceful, some definitely won’t be. In the gameplay that we’ve seen we know that giant crabs, huge rhinos and goats are just some of the violent beasts for you to encounter and battle against planet side, armed only with your trusty multitool. Kill too many of these creatures, over mine an area, break into buildings you shouldn’t or otherwise disrupt the flow of the planet and you’re likely to net yourself a wanted level, summoning the peacekeeping sentinels to defend it and giving you more targets to blast. You’ll find peacekeepers off planet too, should you decide to become a space pirate and attack other ships or convoys for fun. The police will arrive to neutralize the threat against other spacecraft and attacking them will bring in the much more powerful military ships for reinforcements. Collect enough of those tasty resources though and your ship and weapons can be upgraded to better tackle all of these threats.

Throughout the galaxy, NPCs can be encountered and traded with, whether that be on a newly discovered planet or on your favourite space station. Resources, ships and weapons can all be obtained this way, allowing you to do nothing but trade in No Man’s Sky, if you so desire. Different items will be more or less valuable depending on your location in the galaxy so resources can be bought low and traded high, earning you a tasty profit. By learning the alien languages, you’ll then be able to build relationships and forge allegiances with the various races of NPCs across the universe and, in doing so, earn yourself bonuses. The opposite is also true though and if you manage to irritate the whole galaxy, your life as a trader will be a lot more difficult. The benefits and disadvantages of this are not fully clear yet, but we do know that some races will be combat-based and others will grant new technologies to trade if your standing with them is high enough.

Even ignoring the violent creatures and space policing sentinels trying to kill you, it still seems that there is danger galore in No Man’s Sky. As previously mentioned, every planet in the universe will have a unique climate and ecosystem with some of these landing on extreme ends of the scale. You’ll encounter freezing cold and extreme heat as well as radioactive planets and toxic plant life – all of which can be dealt with by upgrading your suit, provided you’ve enough fuel to power its protection. Fuel will run your weapon and ship so managing your inventory will be essential for survival. Failing that, if your gun is beefy enough you can always blast a hole in the landscape for shelter. There may also be the threat of other players to contend with; although No Man’s Sky is primarily a single player experience, it will be possible to find other players in the universe and the rumours suggest you can either befriend or attack them. If you feel like having a buddy to watch your back, you can. If you want to attack them that’s cool too, the choice is yours. There won’t be any sort of party system though so while it’ll be possible to coordinate a meetup with your friends, it certainly won’t be easy given that you could be starting at opposite ends of the universe. The developers have said that some of the predators are nocturnal so maybe, with a bit of luck, you’ll be safe if you stick to daylight exploration.