Preview: Final Fantasy XV feels like a good compromise for an impossible task 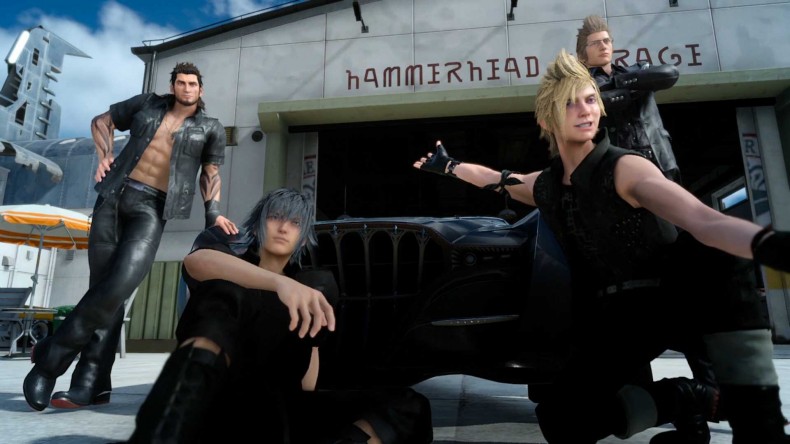 Final Fantasy XV is apparently a game “for fans and for new players”. I’ll admit, as a 32-year-old, I’m a new player. I missed the boat for the previous entries and ever since, the hype and nostalgia dedicated to the best games makes it hard for me to access them. So, I truly am a new player and have approached the game as such. Will I understand the story? Will I care about the characters? Will the game hold much for someone who hasn’t entered the world before?

Admittedly the game doesn’t get off to a great start in that regard. We see a huge palace and a King sending his son, Prince Noctis, away to get married. He leaves with his friends in a black convertible, looking like they’re about to drop the most fire emo album of 2007.

The quartet of broody Noctis, brainy Ignis, whimsical Prompto and man mountain Gladiolous travel like a stag party designed by The Cure’s Robert Smith. Noctis could be any lead singer, Ignis (who is teased for being smart) has a Matrix vibe about him, Prompto and his Shakespearian name looks like the drummer from Green Day and that leaves Gladiolous of Anarchy. It becomes clear very quickly that this rag tag bunch is quite amusing and as a new player, it’s quite a nice dynamic to jump in to. Despite this, some of the plot references do feel like they need a bit more of a “here’s what’s going on” introduction to the world. As their car breaks down, the four diligently push it towards the Hammerhead Outpost for repairs and that’s where the game really begins.

Combat is in real-time and simple to use, with all four of the characters having a special ability once charged. You use the D-pad to select your equipped weapons and have simple attack, dodge/block and special buttons. Much like a hack-n-slash, you bash the button to get a higher combo and charge up for the better attacks, selectable by the left bumper or L1 on a pad and then selected by the indicated buttons. Doing this earns you Ascension points or AP, which levels your characters and their other passive skills.

This is not only the basics of combat — it’s pretty much it. As the critters increased in levels and our foursome stumble into a boss battle, it’s very much like other JRPG games I’ve played recently in preview like God Eater. Your team surrounds the animal and smashes it until it is no longer alive. You can use the special abilities to increase the damage but it’s still the same process. One clever thing is Noctis’s warp ability that is good to dodge out of the way of attacks or to find a higher vantage point and plan your attack. But, apart from that, the combat feels adequate or functional. It feels like it’s a part of the game but not the most important element with its lack of deep tactics. It’s needed in the game but very obviously is not the intended main experience. There’s obviously going to be copious levels of disagreement on whether real-time or turn-based attacks are the preferred combat method for a Final Fantasy game. And whilst this is the best compromise, it doesn’t feel particularly satisfying, although that could just be the scramble of the melee with enemies like the low-level Reapertails.

Once you’ve experienced a few desolate buildings, a few attacks and a picked up a few items you get to the real open world feel of Final Fantasy XV. The camping seems very simple and a good way to save your game and give yourself a stat boost thanks to the food that Ignis cooks. If you stop off at a town instead, there are shops where you can buy better food, but they are quite expensive. Then there’s the driving which is both fun and rather placid at the same time.

The simple thing is getting Ignis to drive so you can just relax, enjoy some in-car dialogue and mess about with the CD player. Ignis will not drive at night though so if you want to go about after dark, you’ll be in charge, although it’s not as fun as it sounds. Driving is, apart from the occasional corner, practically on rails. There’s acceleration control and very little else. What it does mean is that you can sit back and enjoy listening to the classic Final Fantasy soundtracks that are available to purchase at any store in the game. It’s not exactly driving music but a touch that I very much appreciate. As the game goes on, you get to see the passive skills in action from your party. After you sleep, you’ll see the photographs that Prompto has taken of your journey, which you can save. These are mostly random so there’s the occasional hilarious one, although most involve your crew photobombing each other like a made-for-TV Disney movie about a school field trip. Noctis can fish from various fishing points with Golden Quay is the earliest available one — handy for catching dinner for better and cheaper stat boosts. Galdiolous can train you to be fast and stronger with morning workouts.

As the game is open world, you’ll get to explore new areas, retrace old ground and start any number of side quests. These are mostly hunting creatures and clearing dungeons in the early game stage but they are great for leveling up. You’ll be able to craft items using elemental powers and manipulate them with the items you find in the world. You’ll be able to drive around and find treasure in open spaces and unlock new grounds to camp. That’s the one thing I’ve been able to take from my short time with Final Fantasy XV — It’s very much down to you as to what experience you have.

As the main story progresses you’ll get better weapons and find out more about your history and the problems that are keeping the world on the precipice of civil war, as well as the relationships that bind and divide the characters throughout the campaign. With this said, you could still easily spend ten hours in the first area of Hammerhead and complete all the quests and level up. In the early game, there isn’t a great deal of artistic scope. You don’t get the wow factor that you have had in recent role-playing games of a lush world or excellent lighting. What you do get is thrown straight into the mix and an easy control method to get to grips with. As you go out further in the game then there are nicer locales and greater use of the dynamic day and night cycle. For now, I want to play more because I want to see what else lies beyond, I want to buy all the soundtracks for the car and I want to get to the bottom of the deceit and selective truths that the characters experience. I want to get to know them better, even if they look like a support act for My Chemical Romance. I’m also kind of thankful that the combat is functional enough to let me as a new player go straight in and not have to worry about tactics or what everything is.

This is definitely a game for new players and there’s enough here for the old fans to indulge, although maybe not enough to please everyone but after so many games across so many different technological generations, this feels like a good compromise for an impossible task.

Preview based on four hours of play at Square Enix’s UK office.
Liked it? Take a second to support GodisaGeek.com on Patreon!