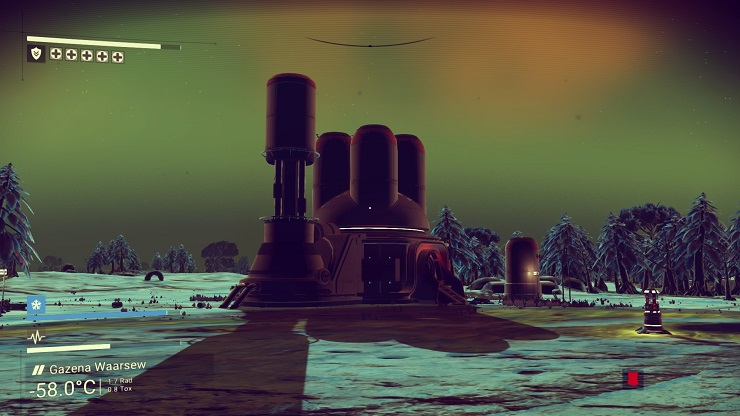 Everything mentioned below has happened in my playthrough so far, therefore it may contain spoilers.

I am in my ship at the foot of a colossal alien monolith. It spoke to me and told me to follow its path, but I have so many questions – so many fears. I’ve already found smaller monoliths that have shared the common tongue of the Korvax and rescued me from my own hallucinations, but this one is different. This universe is not what it seems and I’m only just starting to grasp what the hell’s going on.

Since waking up with no recollection of what happened to me before the crash, I’ve been attacked by strange beasts, shot at by space pirates and fought off the rough weather of baron and hostile planets. It seems like so long ago that I woke up oblivious to everything – where I’d been and what I’d been involved in.

Lezatol Luessz was a cold and eerie planet – filled with vibrant flora and cavernous landscapes. My thrusters were damaged and my pulse engine was out of juice. I had to use my wits to scavenge for plutonium and thamium9, both of which were key to getting my ship off the ground and out there into the vast, yet comforting space. Whilst searching for parts and fuel, a strange red orb asked me to heed its guidance and I accepted; I’m not 100% sure why I said yes, but I think I just needed a friend – a path to follow. After gathering the resources I needed to escape, I headed off towards the stars looking for answers as to what happened. I visited various planets and scavenged carbon, zinc, platinum and iridium along with trinkets and antiques to sell at the various traders I’d bump into. I fought off sentinels and beasts with my blaster barley escaping with my life. After visiting the sandy and toxic planet of Subotari NM821, I built a hyperdrive and left one system for the next in search of answers.

I’d been so obsessed with uncovering my history that I forgot about the orb. As I flew from planet to planet, I uncovered more information about something called the Atlas. It seemed to be the home of something extremely significant to life and the existence of everything. It was showing me things I never thought I knew and it was linked to the orb somehow.

On Gazeena Waarsew, I managed to put my new found knowledge of the Korvax language to good use; I’d been drawn to this one monolith and it’s power over me seduced my mind. I started to hallucinate and see small metal spiders crawl into my helmet – into my suit. I was terrified and sure my death was inevitable. In the texts on the monolith, I spotted the word ‘calm’ – one I’d recently learned. It instilled an inner peace which allowed me to brave the hallucinations and ride them out. Shortly after, they stopped. The atlas was watching and rewarded me for staying strong. It was opening my eyes to something incredible, but at the same time something more sinister than what I ever thought was going on. After initiating my FTL drive again, I ended up in a new system. On Sabara Towanu, I located a derelict facility covered in dust and horror. I looked around and saw red, bloody alien tissue once alive, barely dead. It was everywehere – on the terminal, the walls. I flew away with the image of whatever I saw engrained on my brain. What the fuck was going on?

I continued to follow the Atlas across the universe until I saw a warning on my ship’s control desk. An alarm went off and my attention was drawn to some assholes shooting at me from behind. Hit after hit, I took their punishment and almost blew up – into a million goddamn pieces. Escaping a band of space pirates is no easy feat, but I did it. I fucking did it! I don’t know how I managed to break free and survive and I don’t care. For some reason they gave up and headed off into the distance. After everything that had happened, it all led me to here – to this huge alien monolith on Sraaga-Finjos Vurder. I stood at its feet and the Atlas asked me to follow the stars. It spoke to me through the monolith and I have no idea whether to listen to its words or carry on looking for answers about my own mysterious journey. One thing’s for sure though: I need to survive. I need to survive and keep going because something is after me, and I don’t want to hang around to find out what. There is danger on every planet and I sure as hell don’t want to die. This is my sky – my life and I don’t want to die.

Video games are cool. Don't let anybody tell you any different.
MORE LIKE THIS
hello gamesNo Man's SkyPCPS4