So far, No Man’s Sky is everything I wanted it to be 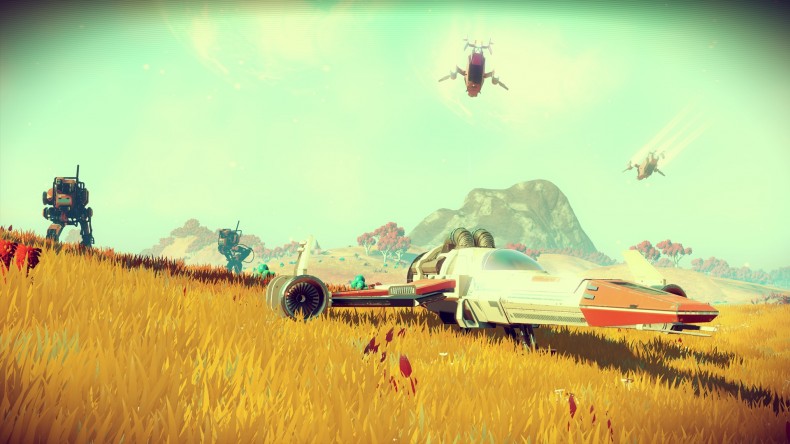 The most hyped game of this generation (also known as No Man’s Sky) starts off by throwing you in the deep end in a way those games do. You know the ones: menu upon menu, stat upon stat – those scary games; the life-sapping Diablo’s of the world that have you scared to sell a resource in case you need it later, only, if you don’t sell it you can’t pick up the other one right in front of you because you haven’t got any space.

I feel like that’s a mouthful, a hard to digest mish-mash of words and ideals that spark your mind and heart all at once. And that’s good, because that’s also what No Man’s Sky is.

So much is happening. The resource juggling would be fine if it weren’t for the vivid, alive soundtrack and the ambient audio that scares the shit out of you because it feels so unique. I’ve lost count of the amount of times I’ve panicked because it sounded and felt like a rock slide or earthquake was happening, only to realise it’s just the planet I’m on that is just, well, being a planet unlike Earth. The floor shakes, but nothing changes, it’s just the unpronounceable place I’ve discovered.

If you want to start your game without any spoilers, then jump out now, because I’m going to vaguely talk about the tutorial sections that, while they won’t take place on the same planet, will have similar methods. You start on a planet – any planet – with a damaged space ship, and the idea is to forage for the things you need to fix it, power it up, and leave. I got sidetracked by the plethora of components that all fit into the universe somehow, and an hour later I had fixed my ship and hit the stars for the first time. And it felt incredible.

So many games have aped the things you can do in No Man’s Sky, but few give you the control. You press a button to get into your ship, then you press another to take off. You aim your ship up, and you boost out of the planet’s atmosphere into the blackness that is above. And then there are more. More planets, more stars, space stations, aliens. The infinite possibilities of space stretch out. The way-points from distress beacons that appear on yet more planets, teasing you. Come to us, we probably won’t kill you!

So I explored, and I got lost again. I found gold, and I found a new tool, and more technology. I crafted things and I spoke with aliens that I understood just one single solitary word of. “Rare”. What else was he saying? “You’re a rare find, I can’t wait to eat you”. Or “Bring me rare goods, and I will mate with you”. I don’t know. I just don’t fucking know. It feels endless, deep, engaging, and rewarding.

I left the planet, and went to another. Gravity was harsher and thus my life support was drained quicker. It might have been my imagination, but I felt as though I was moving slower, and taking longer to ascend with my jetpack. I went back to the space station, I created a warp drive and I didn’t use it, because there’s too much exploring to do and I’m not ready. I looked at Alien spaceships and tried to buy them because they had more space than mine, but I didn’t have the 1.2 million units required to buy it. This is a scary game. One of those games. Some of you will hate it. The fetch quest nature of the early goals will drive you nuts, the choose your own text adventure nature of the alien conversations will annoy yet more of you. The weird chromatic aberration, occasional texture pop, and some of the grammar missing apostrophes will have some of you taking to Twitter in a rage. Oh and I’m not certain at this point, but I think you might only be able to save at certain points, too.

But this is what I wanted. I wanted a universe I could explore at my own pace. I wanted something that let me grow and understand with it. My biggest concern right now is that of longevity. So much of it requires self motivation that if the planets don’t stay fresh, and the tasks become overly mundane, people (myself potentially included) won’t ever see the centre of this incredible, enormous universe. Right now, though, No Man’s Sky is everything I wanted it to be, but only time will tell if it can sustain that feeling.