previous
Adventures in VR: Horror *and* Work!
random
next
Try Plants Vs. Zombies Garden Warfare 2 for free this Summer and get 50% off
0 comments 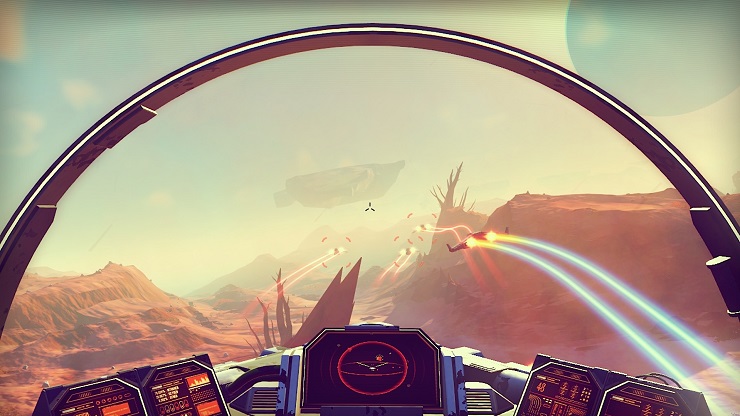 Heaven forbid you make a game you love and tell people you love it. And woe fucking betide you if you dare show too much pride in it before the internet and the critics have decided whether it’s worthy or not.

If you haven’t seen the Reddit by daymeehun, the guy who spent a fortune on an early and possibly illegal copy of No Man’s Sky and then spooged out his opinions on it as quickly as possible, then it is worth a look if it hasn’t already been taken down yet. I say it’s worth a look, because the individual in question isn’t actually overly negative in his observations; in fact, he lists a bunch of positives at the bottom of his post for the sake of balance.

I have no problem, per se, with his post. It’s a spoiler post, and because we’re all high-functioning mammals with the ability to A) blink and B) look away from stuff, we don’t have to read it. It’s also, in the words of J. Jonah Jameson, a “scoop”. It’s concrete(ish) info on a game that, up until now, we knew fuck all about. In fact, the reason people are so hungry for data on No Man’s Sky is because whoever is actually responsible have been (in my opinion) far too stingy with the drip-feed. People need to know shit, and if you don’t tell them shit, they will find a way to dig shit up for themselves. This is a game that was always going to leak somewhere before launch, because a culture has built up around it of people who know diddly-squat and are dying to. I’m not blaming Hello directly, but let’s be honest, it was always high-risk.

Well, now people know much more than diddly-squat and guess what? Would you believe they’re fucked off about that, too? Now they have the info, wrestled from the ether by this courageous and possibly soon-to-be-banned player (I’m not sure how the laws work exactly, but I’m pretty sure he fucking broke some somewhere), they’re still not happy. Because now they’re disappointed, and the internet at large is going nuts. In context, the internet at large also goes nuts at videos of cats falling off stuff, people happy-slapping grannies and Kim Kardashian’s barenaked ass every time she drops trow. Anyway, it was revealed in the Reddit post that this fella had already reached the mysterious “centre”, an enigmatic end-game event which is apparently a big deal. And you can do it in “just” 30 hours. That’s all. It takes just under a working week to mainline a game that gives you an entire universe to explore.

How fucking dare they, eh?

Also, it’s buggy. Bear in mind he’s playing before launch and there may well be a patch coming to the public on or around August 9th, but who cares? Not the internet. It’s now a buggy mess, of course, because Hello Games are too ambitious. How dare they take on a project of such magnitude and tell us all how big it is and try to please all the people all the time? Bastards. Other things touched upon were issues with not being able to upgrade your ship or charge your weapons, which may be bugs or may be things hidden behind milestones that you need to reach and unlock, we don’t know. The point is (and I do have a point): what’s the point? We use words like “concern” and “outrage” when what we really mean is that people are butthurt over what may or may not be contained in a game that is yet to be made available to the public – or the press, for that matter.

Maybe it is partly down to Hello Games’ lack of transparency. People have questioned, as question they will, why the game is not available to the media yet for reviews and those who have already decided that this means it’s shite have used the aforementioned Reddit post to galvanise such spurious claims. The truth is, we still don’t know.

No Man’s Sky’s tag-line is “Your universe awaits”. YOURS. Not someone else’s. I don’t care what my next door neighbour’s experience with the game will be, unless we’re discussing it over the garden fence on a Sunday afternoon one week in September. All I care about is adventure, which is yet to begin. You’ve every right to read up on someone else’s thoughts, and those thoughts are likely to inform your pre-order decision one way or the other because that’s human nature these days, but it’s unfair to level your resultant vitriol against a game that isn’t in the public domain yet. It’s unfair to Hello Games who have tried as hard as possible to keep the info-leaks to a minimum so that we can experience it the way it’s supposed to be experienced. It’s unfair to those of us who have made our peace with the lack of info and gone in on a pre-order based purely on faith.

If I reach the “end” of No Man’s Sky during the first week, I doubt I’ll care overly much – there will still be a shit-load of stuff to see and do. If there are bugs, well… It’s a sad state of affairs but, honestly, what open-world game is released without bugs these days? Some will get patched, some will persist, none will be allowed to “break the game” for long. As for the perceived limitations like a ship you can’t upgrade and a lack of wonder or weirdness – wait until you play the game as a whole and make your own decisions before you judge it. Hold off voicing your smug “I knew it was going to be shit” comments until you’ve at least played a few hours and remember that the guys and girls at Hello Games have poured a hell of a lot of hours, money and love into this game and it – and they – deserve to be judged fairly based on your own experiences, not what some dude complained about.

Regardless of whether or not you’re upset or disappointed by daymeehun’s findings, that is exactly what they are: his findings, his discoveries in his universe. Yours, and mine, still await us.

Senior Content Editor Mick has been playing games for over 30 years and writing about them for around 12. After drifting from site to site for a while, settling briefly at the now-defunct Made2Game and freelancing for the gone-but-not-forgotten NintendoGamer Magazine, he came at last to rest at Godisageek. Mick has been a reviewer, staff writer and content editor here for some time, while also moonlighting a little for Red Bull Games. He has 4 kids, has written 2 novels, and sometimes even manages to pay a bill or two. You'll usually find him defending the galaxy in Destiny 2, battling evil in Diablo 3, or lurking in the background on Twitter. Find him there @Jedi_Beats_Tank, or on XBL (JediWaster247), PSN (Jedi_Waster) or Nintendo (JediWaster).
MORE LIKE THIS
hello gamesNo Man's SkyPCPlayStation 4