Who Cares if No Man’s Sky Has No Story? 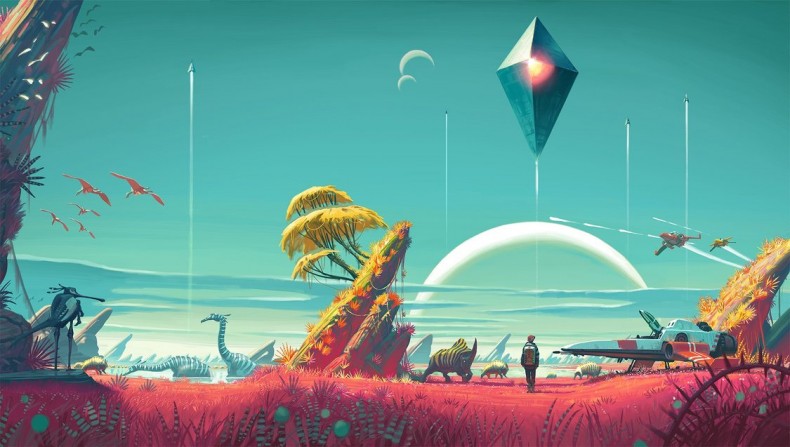 We’ve seen a lot of No Man’s Sky since its initial reveal. It’s no surprise that a game as big as this is taking a while to develop, and as such it’s been a constant in shows like the Spike Games Awards and E3 – got to keep it in the public eye during development, right? The thing is: we’ve seen a video of stuff, another video where it looks like the same stuff, several further videos with very slightly different stuff, and then a gameplay demo, with a dude talking while doing some stuff. People have been wondering where the actual “game” is. What do you actually DO? I’ve mused on this myself a few times, but then a thought hit me: why does it matter?

Open world games tell a story, but their sandbox approach allows players to do whatever they want in between following the story. In fact, whenever a GTA game is released there are numerous items on the ridiculous things people have done, the stuff they’ve seen and/or achieved. Some GTA players like to drive their cars to the beeches and then just listen to the radio while soaking up the virtual sunset. Minecraft was barren when it first came out and yet became incredibly popular since. Open world games lend themselves to playing differently. Heck, I wouldn’t be surprised if someone is playing The Witcher 3 right now and never using the horse. No Man’s Sky is an open universe game, really. Galaxies, solar systems, planets, all there for you to explore at your leisure. The demo at E3 2015 showed us just how huge its universe actually is, the hook being that nobody will ever visit every planet, it’ll just take too long. Not every planet will be interesting; they’ll all be created through a set of randomised parameters, so the results of your exploration will not always be fruitful.

This is where I like to point to my earlier GTA radio point: No Man’s Sky is built for exploration, so if there’s a story or not, why would it matter? Stick on a Spotify playlist, pick a random planet and make the jump. Look at the flora, watch the fauna, discover an artefact, kill some indigenous species, do it again and again and again. See the place that has been created, marvel at the scope of it all and then go and see what the next random planet is like. Do you like to play games for the escapism they offer? You can’t escape more than that. What an amazing calming experience to just walk around abandoned planets as you listen to Sigur Rós (serving suggestion). No Man’s Sky could very well turn out to be a very hard game to review; so many people will get completely different experiences from it. There may be a game there, there may not, but does it really matter? I don’t think it does. Some people will sink hours into it while others could stick it on to calm down after a considerable amount of time playing Call of Duty’s multiplayer. I’ll probably be the latter, but holy hell I could easily end up being the former if I’m not careful. I don’t think it’ll be hard to lose yourself in No Man’s Sky.

A lover, not a fighter and an all round good guy (he would say that, he wrote this after all), he's happy to be here as part of GIAG.
MORE LIKE THIS
hello gamesNo Man's Sky