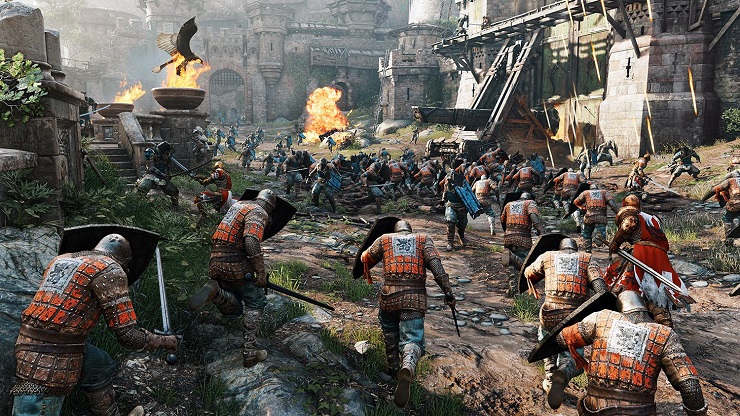 It’s not often these days that I play a game that’s not like everything else. Almost every genre is oversaturated, and it’s rare to find something that really sets out to break the mould. On the very surface of it, Ubisoft’s For Honor is just another multiplayer game. The closed Alpha content I’ve been lucky enough to play features a couple of modes, one of which is Dominion, the age-old game of King of the Hill. Rush Point A and capture it, then defend it, now rush Point B and then C and repeat until one team wins. The big change here, though, is that there are no guns in For Honor. And believe me, it makes a hell of a difference.

The glossy opening cinematic tells the tale of a world that suffers a terrible cataclysm, which thrusts three disparate armies into an endless, millennia-old war seemingly perpetuated by the sinister, unnamed sorceress overlooking the blood-drenched battlefield. Vikings, Knights and Samurai have been warring for a thousand years for land, water and, most importantly, honour.

Going in, it doesn’t take long to realise that this is something brand new and, potentially, something very special. Single combat is the primary concern, and the extensive tutorial mode does its best to train your brain to think about that combat in a different way. At times I was reminded of the Souls games: every encounter with another player or AI bot is a mighty contest in itself. Every blow must be measured, every attack must count, and likewise every swing of your enemy’s blade must be blocked, dodged or countered if you are to survive. Initial attempts to mash my way to victory were immediately dashed. For Honor wants you to fear combat and exult in it at the same time. It wants you to weigh your opponent the instant you meet, and treat them with the respect befitting a fellow warrior. Within a few minutes, you’ll find yourself dancing to its tune without even realising it.

Combat here is all about stance. Holding L2 will select your target, and then moving RS up, left, or right will switch your guard. A left blow when you’re in the lefthand stance will be instantly deflected, which is where the skill comes in. Mimicking your opponent’s stance and attempting to circumvent their guard with heavy and light attacks is the key to victory. It takes some getting used to, but when it clicks it feels amazing and, frankly, looks fantastic. It looks like a duel, not just two people hammering at each other with broadswords; but mighty warriors moving together in a dance of death.

In Dominion there are scores of bots, dressed in either orange or blue, who will meet in the killing ground at the centre of the map and duke it out. As their heroes (the players) die, their resolve either falters or galvanises, and if their line breaks you can’t respawn until morale is restored. You can, however, wade into the midst of the battle and slaughter them all with one hit, which makes you feel like a badass and looks slick and brutal as you carve your way through. It’s only when you see the tell-tale glowing badge of an enemy player approaching that you step back and prepare for a proper fight. Each class plays quite differently. There’s a light and heavy version of all three races, and each feels completely unique to the others. The starter Knight is an all-rounder, while the next one up is a heavy hitter with a shield; the Samurai is faster and less robust, while the Orochi moves like lightning and favours evasion over parrying. Finally, the initial choice of Viking has a long-handled axe with incredible reach and power, while the next one unlocked is a physical powerhouse who moves like a tank in fur boots. Experimentation is essential, but be prepared to die a lot.

As it stands, For Honor feels a little ropey at times. Combat against one enemy is fine, but as soon as you’re met with two, you’re probably going to die. The problem is that the guard system and target lock are absolutely designed for one on one combat, and there seems to be no contingency for multiple opponents. Without the lock-on, you won’t hit anything, yet you can only lock to one enemy at a time and it’s almost impossible to isolate or kite them effectively. If you block one with a high guard, but the other hits you from the right, off-camera, you’re going to be staggered, and then you’ll be butchered in seconds. This is a real problem, as finding yourself alone facing more than one enemy will usually mean you’re about to die – there needs to be a system in place to counter that, even if it’s just the option to call for help or run away quickly when you’re facing uneven odds.

The 2v2 mode is a decent craic if you stick together, while the 1 on 1 duel feels like a real fight to the death. Using the environment is an option in most cases, as kicking them off battlements or into abysses will score a kill – obviously though, this means it pays to watch your own footing. One thing the Alpha affords is a sneak peak of just how much customisation there’s going to be in the main game. You can either search the battlefield after a match to find armour, weapon parts, emblems for your standard, or other cosmetic items (which is automated and happens behind the scenes), or buy them with Steel, a currency earned by completing matches (and which looks suspiciously like it will be available for real world money come launch). The options are many and varied, and it seems that you’ll have a lot of scope to mould your own unique head-splitter in the main game.

There’s massive potential here, and if Ubisoft focus on ironing out the bugs and making it more viable to tackle more than one opponent alone, this could be one of next year’s biggest surprises. Taking an established formula and doing something new with it has always been one of Ubisoft’s strengths, and it looks like For Honor will continue that trend come launch.

Senior Content Editor Mick has been playing games for over 30 years and writing about them for around 12. After drifting from site to site for a while, settling briefly at the now-defunct Made2Game and freelancing for the gone-but-not-forgotten NintendoGamer Magazine, he came at last to rest at Godisageek. Mick has been a reviewer, staff writer and content editor here for some time, while also moonlighting a little for Red Bull Games. He has 4 kids, has written 2 novels, and sometimes even manages to pay a bill or two. You'll usually find him defending the galaxy in Destiny 2, battling evil in Diablo 3, or lurking in the background on Twitter. Find him there @Jedi_Beats_Tank, or on XBL (JediWaster247), PSN (Jedi_Waster) or Nintendo (JediWaster).
MORE LIKE THIS
AlphaFor HonorplaystationUbisoft