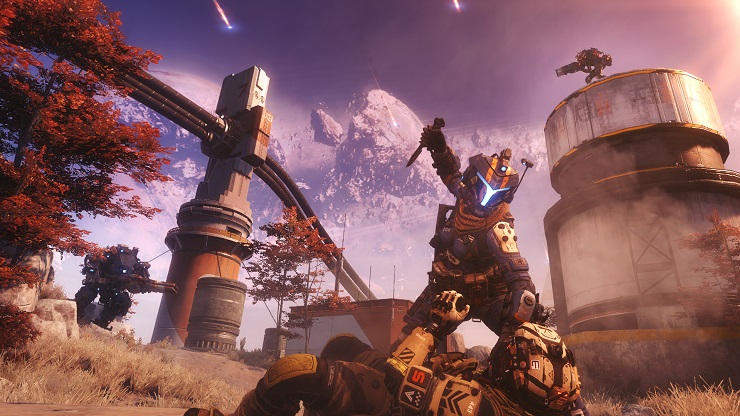 First up, I asked Dusty about the thought process internally about including a single player element in the sequel to Titanfall. He spent a lot of time talking about the talent of the team at Respawn, coming from a diverse background and individuals who had specifically worked on titles such as Medal of Honour and Call of Duty. “Respawn is made up of a large part of the original Infinity Ward,” he said “which has been responsible for designing and creating some of the most highly regarded levels in first person shooters; levels such as ‘Ghillied Up’ and ‘No Russian’ from Modern Warfare 2, so we have a huge array of talent that specialises in single player design.” He went on to say that there is also a huge amount of multiplayer expertise in the team as well, but the challenges that were facing the newly created Respawn Entertainment when they were creating Titanfall revolved around shaking up and reinventing the first person format a little.

“When we set up the new studio we wanted to focus on something new, we had a feeling that the FPS space was getting a little tired and stale with the pop and lock gameplay and the linear levels, and we wanted to work on a new style of playing; that freedom of movement and the parkour elements. So we felt it was better to focus on just one aspect of the game, rather than spread our talent trying to create something completely new, entirely from scratch,” he continued “we felt that we needed to do something exceptionally well, so we decided to just focus on multiplayer. We tried to add story elements into the multiplayer to flesh things out a little, but the feedback was that people wanted more story and context to the universe, so that is what we are doing with Titanfall 2.” Moving on, I asked Dusty what the specific process was for building the single player campaign, and what the team felt was most challenging. “Our development process involves small teams of people putting together what we call ‘little snippets of fun’. Each group goes away and comes back to the rest of the team with their snippet and demonstrates it. From that, we then look to expand on what makes it fun and make it into something larger.” He went on to explain that getting the freedom of movement that players are used to from the multiplayer was a particular challenge. “We wanted to keep the freshness of the movement, and the freedom to get around the level there, but also ensure that you can’t just wall run your way through the level, because where would the fun be there, right?”

The story focuses heavily on the bond between the pilot and the Titan, but Dusty explains there are times when you are split up from your Titan and it is in these levels where the movement helps to solidify the concepts within the story. “We have these moments that we refer to as ‘boots on the ground’ or ‘boots in the air’. There is lots of level exploration available and puzzling, so there is more than one way to get through the level, and being separated from your Titan increases your vulnerability.” I asked Dusty how he felt about introducing Titanfall to a new audience on the PlayStation 4. “Firstly we love our Xbox fans, they are the reason we have a Titanfall 2, they supported and believed in us from the beginning, and I’m excited as a gamer that PlayStation 4 owners will get to see what we have created. You don’t need to have played Titanfall to appreciate Titanfall 2 as we have designed the campaign so that players can learn the mechanics for the movement and the new equipment in a safe environment and the multiplayer is polished and repeatable and easily learned. We’ve made the Titans more class-based which we feel adds more depth and each of the six unique Titans has setups that will appeal to particular play styles.

Players will naturally gravitate to the one that reflects the way they like to play, and we have added in tonnes of customisation and progression for weapons.” He talked a little about some of the cosmetic customisation they have added in which stretches across weapon skins, pilot armour and Titans, and I asked if it were possible to have a hot pink Titan to which he laughed and replied, “Sure! If you want, although it would make you a bit of a target on the battlefield.” It was clear from talking with Dusty that he is very excited about the campaign, and I asked how he felt about the tight release schedule sandwiched between Battlefield 1 and Call of Duty: Infinite Warfare. “First off, any consumer who is a fan of FPS games will be in their element and will be excited. We love what DICE is doing with Battlefield, but in our experience Battlefield attracts a different and specific audience to something like Titanfall. We are feeling really positive about what we have created with Titanfall 2, and the team and I love what we’re playing.

We are more than comfortable that people will be playing Titanfall alongside other titles as we have what we believe to be a unique and innovative experience.” He went on to say, “when you talk about a single player campaign, there are maybe one or two levels in that campaign that people really respond to and talk about, but with Titanfall 2, I believe there are four amazing levels that I think people will go back to play over and over again and from what we are experiencing, the campaign is eight to ten hours long which is unusual these days, plus we have a honed and repeatable multiplayer experience. We are also really proud of the Networks feature that adds a unique social aspect to playing the game and we’re excited about people getting to play the game.”

Time was running out, so I only had time for one more question which was where Dusty kept his Ketchup, in the fridge or cupboard. “Wow, I had to really think there, but when I am at home it is definitely kept in the fridge.” Chalk up another one for #TeamFridge.

All that was left was for me to thank Dusty for his time and say that I was very much looking forward to playing the new campaign.

Likes to shoot stuff and wear pretty shoes. Is a BEAST at Titanfall.
MORE LIKE THIS
PlayStation 4Respawn Entertainmenttitanfall 2Xbox One