The legend of the Wolf Queen and the Dragon Priests 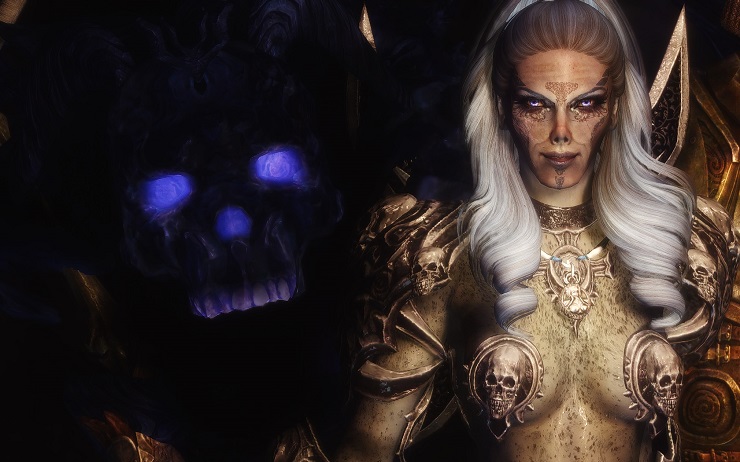 The Elder Scrolls series has always had interesting side quests, and Skyrim was no different, but sometimes making your own adventures is the best way to play. I could talk about many things, like my feud with the Forsworn, but the thing that really sticks in my mind is collecting the series of books about the Wolf Queen.

I didn’t intend on collecting this series, it just so happened that I had found a few of its volumes during my 100+ hours spent wandering around Skyrim, and when I started stocking the bookshelves of my home in Whiterun, I decided to complete my Wolf Queen collection. It took many, many hours of visiting and revisiting every location in the game, searching caves and strongholds (some of which came with the added caveat of killing a few of those Forsworn bastards), even braving a few giant camps, and speaking to every vendor I could find, including the travelling Khajiit caravan. It became something of an obsession, actually. So much so, I ended up having to resort to consulting the guide book (it’s a lovely book, to be fair, and goes well with the big collector’s edition of the game) to track down the final volume. With the collection completed, I sat down in my Whiterun home and started reading. The story of Potema started innocently enough, as the young princess (and granddaughter to the emperor) caused mischief by stealing various items in order to baffle those around her, and to vex her inattentive parents. Things soon took a turn though, when one such act of mischief saw her married off to the elderly king of Solitude when she was just thirteen. Much like Cersei in the popular A Song of Ice and Fire/Game of Thrones series, Potema soon learned how to play the political game and used her power to great effect, gaining an incredible influence over many important figures within the empire. But power does not last, and when things started to crash down around her, she resorted to dark arts in order to defeat her enemies, her madness leaving her alone with only reanimated skeletons and demons to keep her company. Even after her eventual death, the name of Potema, the Wolf Queen still strikes fear in the hearts of many.

It’s a great story, and well worth the hours spent in collecting all eight volumes, but it doesn’t end there. While visiting Solitude afterwards, I discovered a quest in which I was to investigate a nearby cave, as reports of mysterious lights have been coming in. This cave led to the revelation that a group of necromancers were actually trying to resurrect the Wolf Queen herself!

After all the searching for the books, and reading the fantastic story told within their pages, stumbling upon a quest that actually continued Potema’s story was incredibly gratifying. What started as a personal mission, no quest involved, became a fully fledged side quest that somehow felt specifically made for me. It felt like my own investigation, my own obsession, was rewarded with a proper conclusion. Obsession seems to fuel my in-game missions, as it did with my other quest: tracking down the Dragon Priests. The first time I found one of these fellows, it was an in a tomb somewhere (I forget where exactly, it’s been quite a few years since this first meeting occurred) and I was thrust into a fight for my life.

You see, the Dragon Priests were once disciples of Alduin and were buried alongside their dragon gods, but have since been resurrected as powerful liches. They wear enchanted masks that give them their terrible powers, and they wield magic that can tear you to pieces, if you manage to avoid already being torn apart by summoned draugr and atronachs.

After defeating my first Dragon Priest, at the time unaware that it was the first of many, I claimed its mask for myself. Although not quite as powerful as expected, it did offer some nice benefits and it looked kinda cool. It was only after stumbling upon another priest that I began to realise that there were probably more of them within the world of Skyrim. And so, another obsession began…

With a bit of research, I discovered that these priests were indeed a part of the history of Skyrim and Alduin, and off I went to find them. I actually only wanted their masks, but if I was to own them, I had to destroy their owners. Luckily, they were evil, undead priests, so murdering them seemed like a righteous thing for my Dragonborn to do.

My mission, again not an official side quest, led me all over Skyrim, and I fought even more dangerous Dragon Priests. After gaining all the masks, I learned that there was one final one, but I would need all the masks I had in order to acquire it. I won’t spoil the location or anything, but I will say that I eventually discovered the final mask and my quest was finally complete. Unlike the tale of the Wolf Queen, there was no side quest involved with the Dragon Priests and their masks, but discovering their story on my own was still incredibly satisfying. Of course, anyone can do this, but it felt like I had created my own side quest and followed it through to completion, all through hints and books within the game’s world. Once again, my own obsessive need to find a set of items was rewarded.

These are just a couple of examples of the sometimes-hidden adventures that lie within the various Elder Scrolls games, and yet another reason why they are so popular and so critically acclaimed. Would I do all this again? You’re damn right.