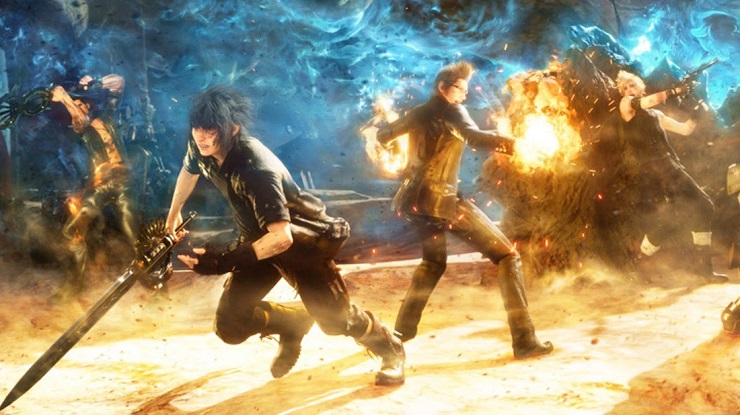 Final Fantasy XV is almost out, and hype levels are through the roof. We’ve all been waiting to explore the world of Eos, cruise the highways with our friends and embark on a legendary quest like no other, but there’s no way you’ll be able to survive unless you can fight. You’ll encounter monsters, soldiers, mechs and more throughout Final Fantasy XV, so knowing what the best course of action is for each enemy is important. We’ve got a few basic tips to get you ready for big battles and small scuffles, covering all bases and making sure you make the most of the tools you’re given.

The most common form of attack in Final Fantasy XV is striking. The strike button will make you attack your enemy with whichever weapon you have equipped. You can allocate four weapons (or spells) at a time to the D-pad, and switching between them requires a quick press of one of the directions you’ve mapped them to. There’s so much more than a simple press of the strike button; moving the left analogue in a specific direction when striking makes Noctis dish out more damage on certain enemies, performing attacks like Blind Side or Side Strick.

Let’s do the blade warp, again

If you’ve watched Kingsglaive, or watched some of the gameplay videos, you’ll probably have already seen the coolest form of attack in Final Fantasy XV. No matter how far away you are from an enemy – if you can lock onto them, pressing warp will allow you to throw your blade at them, then teleport within mere feet of them before plunging your sword into their bodies. The furthest away from the enemy you are, the more damage it does so always factor that into your attacks. Some high points in the game’s environments let you warp up to them; for example, if there’s a ledge behind your target, you can warp up to it, then warp attack from a great vantage point which they’ll never see coming. Along with all the different kind of physical weapons you can use, magic plays quite an important role in combat. You can collect elementary items like fire and ice, and then craft them into spells which you can use in battle. Bear in mind that certain spells are more effective than others on different types of enemies, and experimenting on the battlefield will help you later down the line.

Defence is the best form of offence

Noctis has some excellent ways to avoid attacks and it’s vital you get used to them because there’ll be times when you’re overwhelmed by enemies. First of all, holding in the dodge button will see your body turn leave a blue silhouette as an enemy tries to slice you with their blade, then you’ll reappear almost instantly next to it, avoiding the attack like the plague. By tapping the dodge button, you can dive out the way, and when prompted and pressed at the right time, you can block an attack and parry immediately after by striking them with your weapon.

Get by with a little help from your friends

Another great feature when fighting countless enemies is holding the L1 button and choosing one of your friends to take part in a double team manoeuvre. Whether it’s Prompto, Gladiolus or Ignis, each one has a special attack that will precede an opportunity for you to follow up with an attack of your own. Hit the strike button at the right time and you’ll dish out quite a beating of your own. Variety is the spice of life

There’re so many ways in which you can attack in FFXV that it’s easy to never try them all. Sometimes you may be comfortable bashing the strike button to slash with a greatsword, but at some point, things are going to get tough. Trying different techniques early on will save you against a big boss fight down the line. You have your standard attacks, magic attacks, warp strikes and team-based attacks, so use them wisely and equally.

MP is your friend, so take care of it

Many of your varied attacks consume MP, and once depleted, your basic attacks can become weak and redundant. If you find yourself in this position, find a quiet spot or some cover and hold the dodge button in to crouch. By doing so, your MP meter will begin to fill again and you’ll be back out there kicking ass.

I know, thank you. As proud as I am of this wonderful mantra, some bigger enemies and bosses won’t even flinch if you go in without a plan. Always look for weak spots in their body or their structure, and try to scope out any patterns of attack they may have. Sometimes, certain enemies wear themselves out and become vulnerable, allowing you to launch a barrage of attacks at them. You’ll earn ability points in Final Fantasy XV, and spending them offers Noctis and his friends new abilities. Don’t spend them all at once; sometimes saving them up for an ability a little higher in value will be more beneficial depending on how you play. Make sure you use this Ascension Tree because there are some awesome skills that offer new moves and also build upon some of your already existing abilities.

Always have a full bag of tricks

My final words of wisdom for you are this: always keep a handful of HP items in your inventory. You can buy Elixir from plenty of shops, and you can also find them scattered all over the place. By pressing the right trigger in battle, you’ll bring up the consumable items which you can have for yourself or dish out to your buddies, so using an elixir or a potion when all hope seems lost can keep you going long enough to finish the fight.

Final Fantasy XV’s combat is fantastic, offering a deep strategical edge with plenty of options to succeed in battle. Take these tips into Eos and go beat up those that have wronged you. Good luck, Noctis, and God speed.

Video games are cool. Don't let anybody tell you any different.
MORE LIKE THIS
Final Fantasy XV

Final Fantasy XV Pocket Edition releases on February 9, Up for pre-order now on iOS
Support us on Patreon for exclusive content