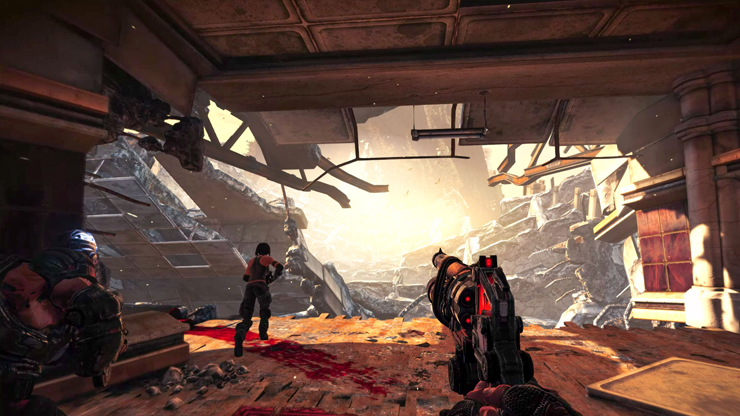 The upgraded release with new content and all DLC included will be hitting current generation platforms in April next year. It will support 4K resolution on PC and PS4 Pro and give you a chance to play as Duke Nukem. The full package contains the following:

The Total Package – All previously-released content including all maps, modes, and more on your favorite modern platform
New Overkill Campaign Mode – Blast your way through the campaign by starting with an unrestricted arsenal of weapons and Skillshots
New Echo Maps – Showcase your skills on six brand-new levels for the score-based Echo Mode
Killer Visuals – Presented with updated models, environments, and animations all running at a smoother framerate than ever before
The Art of Destruction – Orchestrate masterful kills by mixing fast-paced gunplay with unique kick, slide, and leash combos
Visceral Audio – Bask your ears in Skillshot glory with newly remastered audio effects
Duke Nukem’s Bulletstorm Tour – Pre-order the game and get the option to play through the entire Bulletstorm: Full Clip Edition campaign as Duke Nukem, featuring a fully rerecorded script and brand-new lines from the original voice of Duke

Bulletstorm: Full Clip Edition is set to release on April 7, 2017 on PlayStation 4, Xbox One, and PC. You can preorder it on Steam right now.