For Honor is a bloody union of intelligence and brute force 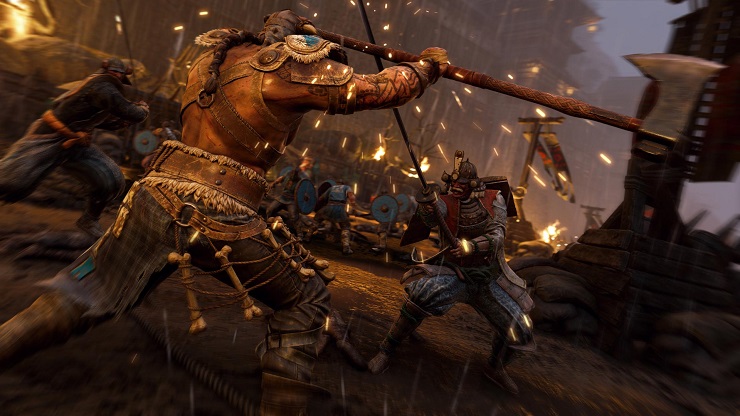 I’ve always had a love for history. Different civilisations in millennia gone by, their cultures, how they lived, who they prayed to, what they ate, how they partied, where in the world they impacted and how they fought. Be they Vikings or Pirates, Knights or Cowboys, Samurais or Romans, I love learning about all of these long lost people. There are various TV shows, like Vikings, Black Sails and Game of Thrones, that provide the historical drama I crave, but aside from a few examples I haven’t found many in the sphere of video games. Thankfully, For Honor exists and it brings three of the above groups to life in glorious gory detail.

I played around three hours of Ubisoft’s upcoming historical, multi-clan war, roughly split 50/50 between the campaign and multiplayer and thoroughly enjoyed all of what I played, despite a couple of balancing issues that will hopefully be tweaked by the time the game releases in February.

In the multiplayer segment of the demo, myself and three other journalists (Team Horse forever!) linked up against four other players to play through three different game modes. The first and grandest of which was Dominion. The mode is similar to Domination, in which you have to claim the three different points and hold them in order to increase the score. The first team to 1,000 points wins, however, the score in Dominion is dynamic and will go up and down depending on how many points you hold and how much killing is getting done. Once a team has reached the 1,000 marker, they must also kill all the remaining players on the opposite team to confirm the victory. What makes Dominion so grand is the AI grunts that also accompany you during the match; these poor sods will charge and only compete for the middle point. Their inclusion is great and it makes the match as it gives it a real sense of scale, making it feel like a proper medieval scrap, as countless, forgettable faces just stab the shit out of each other. They’re also really easy to kill which made me feel like a badass when I mowed bare of them down at once. The second game mode was Elimination, in which real life players, no AI, face off against each other until all the members of a team are dead. This mode was really fun as it required a bit more communication within the team and really fostered the camaraderie between us. It was also interesting how quickly the meta of the game began to take shape. In Elimination you can be revived from the dead, within a time limit, as long as you aren’t killed via one of the gruesome executions, which can only be activated while using a heavy attack. This meant that while our opponents were using quicker warriors and light attacks to kill us initially, we were able to keep bringing one another back and eventually able to overwhelm our enemies and win. This was an important touch because I can see For Honor going down the unfortunate path of Overwatch when everyone selects a certain character, but this piece of game design makes it unbeneficial to only use the nimblest characters and their light attacks.

The final game mode we experienced was Duel, a straight up one-on-one fight to the death. This was a really intriguing game mode as it relied solely on your own skill and how well you play with a certain character class. I easily beat my opponent with the lighter class, shaded a victory with the middle class, but was then demolished when I attempted to play as a heavy character. The matches were tense and they could go either way which kept them interesting.

I really enjoyed the multiplayer; there was enough variety in just the three game modes, which led to tense battles, euphoric victory and moments of utter hilarity. My only concern is that again – just like Overwatch, playing with friends may be necessary in order to get full enjoyment of the multiplayer. The foundations atop of which these three game modes stand upon are the unique combat mechanics that I found to be compelling. If you’re not locked on to an enemy, like when you just want to take out a swarm of grunts, all you need to do is press either R1 or R2 which will release a light or heavy attack, respectively, and take out loads of fools at once making you feel like a proper medieval badass. However, targeting onto another online player is when things really get interesting. There is a choice of three stances you can take: left, right or upwards. In order to attack an enemy you have to swing your sword in a direction in which your foe  isn’t standing, and to block their attacks you have to match their stance. The combat leads to real games of cat and mouse, as the two warriors facing off at each other have to decide who blinks first and strikes the first blow. I like the combat because it made me think about where and when I’d place my strikes, and as a player who tends to be quite aggressive, it made me rethink my tactics and be patient rather than just dive in. At its best, For Honor is about precision and intelligence rather than brute force.

There’s a lot more complexity and depth to the combat too, with breaks, dodges and other effective moves which were harder to learn but will no doubt prove advantageous to players who practice a lot. Another favourite aspect of the combat for me, though, was the different environmental kills. I fell into a river, was thrown off a cliff and pushed on to a fire, all of which were brutal ways to go and made me connect with the world a lot more.

There are a few concerns in regards to balancing at the moment, as the brute characters often seemed utterly helpless when up against a fast attacker. It also seemed like when in a one-on-one duel, whoever got the first hit in was often the winner and once a player was outnumbered they were absolutely finished. Maybe these are realistic perimeters, but if players have no hope of winning a certain encounter then what would be the point in persevering with them? These are concerns that can easily be tweaked, and with the way For Honor was changed after player feedback from the closed Alpha, I imagine the game will be a lot more refined come release.

I didn’t find myself enjoying the single player quite as much as I did the multi, mainly because – at least in the two early campaign missions I played, the sense of scale wasn’t as grand as the multiplayer. In one mission I played as the small fast knight, and was tasked with infiltrating a Viking camp on my lonesome. This didn’t really work all too well as it was set up like a stealth mission without any stealth antics at all. In the second mission I played a massive Viking who went off to defend his people from other massive Vikings; this mission was better as it felt more in tune to the mechanics of the game, and it also had a cart segment which helped change up the pace. It’s hard to judge a campaign on such little game time and with out any context, but it felt like the campaign will probably just be the training ground for the multiplayer.

I really did enjoying For Honor and it really does have a lot of potential thanks to it’s intense and interesting combat and various game modes. There are some balancing issues that need to be tweaked and I do fear that it will end up being like Overwatch in which friends will be important for enjoyment. But regardless, I’m looking forward to all the medieval butchery I can handle in 2017, because I haven’t had enough of it this year.