previous
Titanfall 2 is the unsung hero of 2016, and deserves every bit of your attention
random
next
This week's new Nintendo eShop titles announced
0 comments

Overwatch has consumed my life and I couldn’t be happier 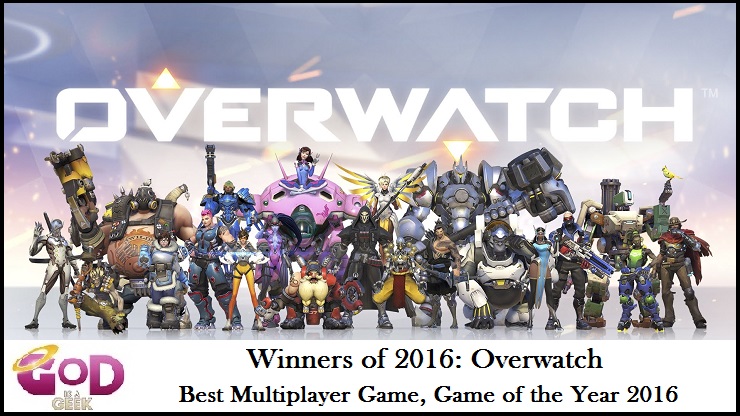 Overwatch somehow managed to not only become my most played game of 2016, but also replace Hearthstone as my gaming addiction. Over the last few months, Overwatch has consumed too much of my life. I’ve even had a blast playing with the God is a Geek staff over multiple occasions, even though we live far apart, and I still play regularly with Greg. Overwatch is brimming with charm, loveable characters, and Blizzard has its hooks in deep.

Overwatch gets a lot of things right. It plays amazing on PC and both consoles (I own it everywhere), and it manages to make you constantly think about how you use the heroes. Whether you’re escorting the payload in Numbani or capturing Hollywood, every map included is unique and a blast to play. Blizzard also released some amazing shorts for Overwatch lore that are stunning and worthy of a full film release (but not like Warcraft).

While it may have seemed a bit barebones at launch, the additions in the form of Arcade mode (that is brilliant) to new seasonal events, and heroes has made me keep devoting time to the addiction. So why is it that a multiplayer hero-based shooter is the game of the year? The variety in heroes and just how plain fun it is to jump in for a quick game whenever. Blizzard also managed creating enough lore through animated shorts and the banter we hear before and during games. Heck I still can’t get over the first time Junkrat imitated Tracer with his “Cheers mate, the cavalry’s here” take on her catchphrase. Why Blizzard hasn’t released proper action figures for every hero and is resorting to Funko Pops that make me want to gouge my eyes out is something I won’t understand.

Competitive mode is something I really didn’t get into while playing Hearthstone because of people reusing the same tired decks over and over again in Ranked mode. Here, things are fast paced and people so far have been taking objectives more seriously. The changes to competitive mode over the course of the two full seasons has also been welcome.

Speaking of changes and feedback, Community feedback being taken into account over multiple occasions is also great for a game like this. Overwatch will live or die based on the community. I still have no trouble finding a game within a minute in any game mode which is something I can’t say for Titanfall 2 that released much later. The changes to hero stacking in particular across the board have been welcome, as facing multiple tanks or Bastions became annoying at one point. I mentioned wanting to own action figures for each hero already (I love the Soldier: 76 statue included with the Collector’s Edition), and this is because of the magnificent art style. The exceptional visuals extend from minute details on each hero and their skins to various easter eggs seen in the maps. I mean we’re at a stage where you can buy a plush of a Pachimari (half onion half octopus) seen in claw machines in the Hanamura map. The craze never stops.

While most people seem to keep mentioning DOOM for its soundtrack and audio design, Overwatch takes the cake in the audio design department by a long shot. Every interaction and hero movement is distinct and it plays a big part. I can’t imagine playing Overwatch while listening to something else and the Arcade Mode 1v1 mystery hero duel has me relying on movement sounds more than ever. Superlative audio design is nothing new for Blizzard, but the implementation in Overwatch is commendable. A fantastic job by every voice actor is more than icing on the cake. I can’t imagine waking up in the morning without a cup of coffee and a bit of Overwatch at this stage, and there are many like me. If you had told me that in 2016 – a year where we had Shin Megami Tensei IV: Apocalypse, Trails of Cold Steel II, and Forza Horizon 3, that my most played game would be a multiplayer shooter by Blizzard I’d have laughed, but here we are. In fact I’ve already spent too much time writing about Overwatch and not playing it today.

In a year that saw amazing multiplayer games like Battlefield 1 and fantastic single player experiences like DOOM and The Witness, Overwatch leaves them all behind. Take a bow, Blizzard. We’re all soldiers now.