previous
Destiny 2 is still scheduled for 2017 according to Activision
random
next
Fire Emblem Heroes: 6 tips for maximum glory
0 comments 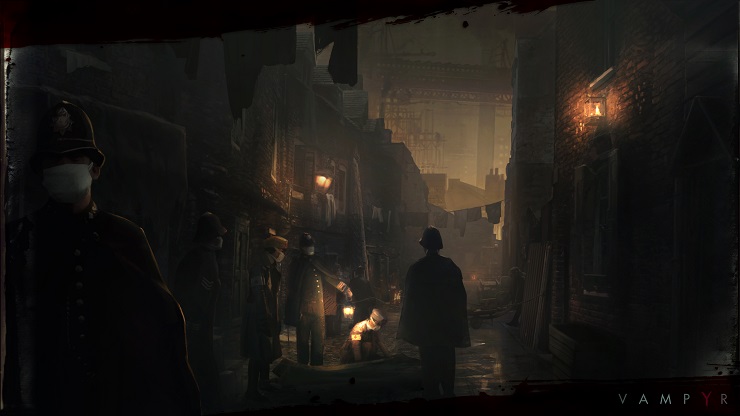 Vampyr is the highly anticipated follow-up from Parisian developers DONTNOD, the team who brought the world the emotional tearjerker Life is Strange back in 2015. This gritty, gothic action-RPG, which follows the journey of Doctor Jonathan Reid as he tries to discover why he has been turned into a blood sucking beast, couldn’t be more different, but the change of scenery is certainly exciting.

Stéphane Beauverger is the narrative director on the title, and he spoke to God is a Geek during Focus Home Interactive’s “What’s Next?” Paris showcase. As any conversation about vampires should begin, Stéphane told us his favourite.

“I really like the female character depicted in the recent movie called Byzantium, I like her a lot. Of course, Dracula! Dracula is the best!”

Inspired by the gothic books of the 19th Century, such as Carmilla, Dracula and Frankenstein, and the first vampire movies like Nosferatu, Vampyr borrows heavily from the themes often depicted in those stories, but DONTNOD will be adding their own unique twists to their project.

“Vampyr is an action-RPG; it’s not a totally narrative driven game – you have to fight back. Jonathan Reid never starts a fight, he tries to stay as a doctor and save people in the crumbling city of London. But the Vampire hunters, they don’t totally agree with the fact that Reid could freely roam the streets at night, so he will be attacked many times and he must feel like a hunted beast. So in the game, to fight means to survive and to resist attacks initiated by hostile characters. Reid’s main goal in the game is to understand why someone made him a vampire at this specific time. Why did they do it? Who did this to Reid? How could Reid try to make a difference by finding the origin of the epidemic?“

Life is Strange got such high praise from so many due to its deeply moving storylines and authentic characters, but will Vampyr have the same emotion core as its predecessor?

“Vampyr will of course have a strong emotional core because you are going to kill a lot of people and it will never be a free pass. Each time you kill someone you will have to face the consequences and the impact on the people who survived – the friends of your victims.”

“Reid is a torn character, I can’t spoil the game; you must remember that he is just coming back home from the war to the city he were born in, so he will probably meet his family again and he has changed a lot.” Talking about Reid, what is his emotional state after being turned into a beat of the night, a deadly and feared vampire?
“When the game starts Reid wakes up in a mass grave. He just came back from the war – there’s a mass epidemic in London. His first reaction is to say – because he is a scientist, someone made a huge mistake – somebody believed I was dead. A few seconds later he is spotted by vampire hunters who start to shoot at him and the bullets just don’t kill him.”

Then he says, “okay, something very strange is happening.” In the first hour of the game I would say he does not accept what he is. He has to test himself to realise that the sun will now burn his skin and that he can make supernatural jumps, things like that. After about an hour he will accept what he is, he will meet the first major NPCs of the game who will tell him that he is a vampire, deal with it, and then they will teach him how to lead his new life.”

Hard choices which affected the story was one of the big appeals of Life is Strange, and it seems as if those difficult decisions will be just as prevalent in Vampyr. In a demonstration, we were shown Tom and Sabrina, the landlords of a rough pub that opens all night in order to give people a place to be and keep them off the streets. Who you decide to kill and feed off will affect what happens to the survivor of the pair.

“There are 60 distinct citizens in the game, there is no nameless Joe character. All of them have names, identities, friends, neighbours, families, so each time you decide to kill one of them it will have a local impact on the people who knew him or her.”

“That’s the case with Tom and Sabrina; whoever you decide to kill first it will affect the surviving character and if you kill both, the the bar will close down. That is how you will have impact every time you take a life. When you kill a citizen it will not impact the main storyline; that would just create a living nightmare for the writer, to imagine a story that could be impacted by 60 different deaths.” While this sounds really interesting and could provide some difficult emotional dilemmas, will decisions be made in the main campaign too?

“The main storyline will provide you with opportunities to perform what we call a “major killing choice”. It’s when you have been asked to make a move against what we call a “community pillar” – someone who is very important in a specific community. You can decide to kill them, to spare them, or to make them a vampire perhaps. You always have different options. Whatever you decide to do will impact the people inside the district of the town in which this specific target was living. This is how the main storyline will impact the citizens. It does not work from down to up, but up to down.”

“In a boss fight, fight against someone and finally decide to spare them or make them into a vampire. Just because you have defeated someone you do not always have to kill them. There will be different factions in the game and you will have to choose a side and this will affect how the game evolves right up to the end. There are four different endings according to what you did in the game.”

Speaking of the four different endings, the hardest of them all can only be attained by not killing and feeding off of a single person throughout the entirety of the game. Which sounds both very cool and extremely difficult, being a vampire and all. Another game that you may know DONTNOD from is Remember Me, which was a lot more action orientated than Life is Strange, and has undoubtedly been learned from in the development of Vampyr, especially in regards to the combat.

“I believe that when we went to the fighting and combat of Vampyr – because we knew that the hero would have to fight back against those who want to hunt him down, we carefully looked at how the fights in Remember Me were created, what were the core mechanics and what we could learn from them to improve the process. Most importantly, the fighting system in Remember Me was directly linked to the fact that Nilin was slowly remembering what she could do because everything was about memory.”

“In Vampyr it is very different, you are now a vampire who has supernatural powers, so we had to create a fighting system that would make the player feel like they actually have a lot of power. You can decide to play as a shadow vampire: discreet and stealthy. You can play as a instinct vampire: much more brutal. Or as a blood vampire, who tried to take control of the blood of his enemies to enhance his own abilities. So the combat in Vampyr is much more RPG oriented, to provide the player with many different abilities and skills, and let them decide what kind of vampire they will be.”

Many believe that open worlds are beginning to become weary and difficult to complete, but thankfully Vampyr won’t be another massive, sprawling landscape that will take a gazillion hours to complete.

“It is a semi open world; that means that most of the different parts of town are all interconnected and you can go from one to the other very early in the game. Except for one part that is directly linked to the storyline and will be unlocked in the second part of the game, but you are free to go wherever you want.” Another aspect of Life is Strange which was talked about with such love and adoration was the beautiful soundtrack, which seemed to suit every emotional beat to an absolute tee. How will the soundtrack be used in Vampyr?

“Life is strange was about the mystery of US teenagers nowadays, so the soundtrack could be very cool and something that could be heard on the radio. Believe me, if we made a soundtrack with the music that you heard in London in 1918, that would be a nightmare for most people. You can hear some music from the past in the game, but the soundtrack will be a lot more electronic, industrial – very light music to make a counterpoint to the Gothic theme and atmosphere of the game.”

After the amazing success of Life is Strange, it would be natural for any development team to feel the pressure to live up to new lofty expectations, but Stéphane didn’t seem phased at all.

“Of course, but each time you try and develop a new game you feel the pressure because you want to deliver the best game you were able to create. I guess the pressure is different because, it’s kind of paradoxical, by delivering Life is Strange we proved that what we wanted to do, to create games with strong characters and strong storylines with emotions and feelings, this is what we always wanted to do. Since Remember Me, since the very first project, and now people recognise that we have that talent. So I believe they will now accept every other project that we create by remembering that this is what we want to create, good games with good stories.” Games in which you play as a vampire are so rare these days, in fact, aside from the odd film, vampires have become an endangered species in popular culture in general. So just how cool is to be working on a game that brings these lorded creatures to life?

“It’s very cool because vampires are very cool creatures! Personally I like the fact that they are killers or monsters that are very aware of who they are. Of the classical monsters: zombies, ghouls, mummies, werewolves, they are stupid killing machines. A vampire is always fully aware of who he is, he is a creature who tries to hide, a creature of deception. I like a lot the fact that vampires are in a situation of perfectly knowing who he is and that he’s manipulating everybody. So to provide this opportunity to the player to actually play a monster, because that’s what you are! Reid is not the hero, he is the main character, but he is not the hero. The heroes are the vampire hunters who try to save the city by destroying the vampires. It’s up to you to decide if you really are the monster they believe you are or if you
try to stay human. It’s very interesting to let the player play the vampire they’d like to play. Does he want to be a vampire.”