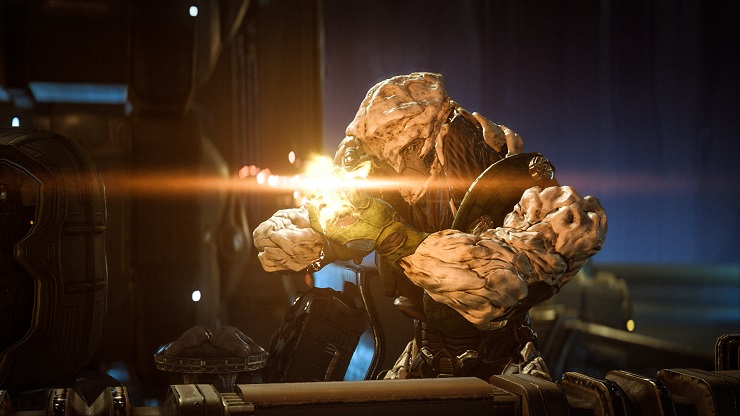 Mass Effect: Andromeda is only a month away, and information is coming in thick and fast. Thankfully, I got to go straight to the source when I spoke to Fabrice Condominas, Producer for the upcoming space opera.

When did you start work on Mass Effect 4?

Probably before the end of Mass Effect 3. The end of the development of Mass Effect 3. When you take years building a universe that complex, obviously you want to keep telling stories in it. So I think there was never any doubt in our mind that we would continue the universe, if not the story and trilogy and all that. And the trilogy, I think that was also fairly early, but I think it’s also one of the reasons we build such complex universes so you can take all the stories you want from the characters for years afterwards. So it was fairly early.

Was there much worry in moving away from Shepard, given how popular the character was?

I wouldn’t say worried. Anxious, probably. You get a lot of pressure, expectations, and all that. But it was necessary. As simple as that. I think at some point, it’s better to end the trilogy and say it was always a trilogy than to keep going and dragging that story out until people stop liking it. So I wouldn’t say worried, but certainly a bit anxious and nervous doing it. We barely had any doubt it was the right decision.

I played as FemShep in the Mass Effect trilogy and Pathfinder doesn’t seem to be quite as strong or badass. Was this deliberate? Was there a feeling of ‘we can’t repeat the same character’?

I noticed Renegade and Paragon has gone, and has been replaced with new dialogue options like intellectual, professional, and so on. Why make the change?

What we wanted to move away from was any binary choices. What we found out, during the trilogy, was that offering binary choices kind of forced people to take a stand. What happened was when players decided what side they were on, they stuck to it. Then they, for example, they will stop reading the dialogue, they’d just pick the side they wanted to be on. We wanted the player to feel the freedom to make the choice they wanted to make without feeling judged. We also removed it because people on one side will judge people on the other side. We wanted to completely remove that feeling. So that forces us to get out of the binary system. And then when you need more than two choices, the resulting question was okay, how do we do it? And another dimension is when you want to build personalities and characters, it’s not only about what you say, it’s how you say it. That notion of tone becomes central to our choice. We also wanted tone to be part of what defined the choice and the relationships because two characters can say the same thing but depending on tone, it can be perceived very definitely. One gameplay mechanic tied into Rengade and Paragon is if you had enough points in either category, you’d unlock greyed out conversation options. Has anything replaced that?

One of my favourite memories from the original Mass Effect is finding a random planet in the galaxy to explore. Can we do this in Andromeda?

So not all planets are story planets. You have some smaller planets that you can… I wouldn’t say are random but you can land on them and have side quests or side adventures. So that’s possible. There are also a number of things that are more or less hidden in space. Celestial bodies, for example, and wrecked ships.

As the Mass Effect trilogy progressed, the experience became bigger but the focus became more narrow. The games felt increasingly linear. Exploration is a big theme for Mass Effect: Andromeda. Did you revisit the original game for inspiration?

Oh totally. Yeah. And a lot. And obviously the Nomad is the biggest sign of that. But it’s not only Mass Effect 1. Mass Effect 1 is part of it because we wanted to bring the feeling of exploration and notion of RPG development, but it’s not just that. It’s about saying okay, we’ve been working on a trilogy all those years within that universe and it had its story. And that story has its constraints and the story was going narrower, but that was part of the story, so that’s okay. Now we don’t have the story constrained, is it possible to take the best of three games? So we take the RPG development and exploration of the first one, loyalty missions of the second one, and the more dynamic combat and action of the third one. And that’s really what we tried to do for every single of the three games. The reason for that is that obviously it takes five years to make [laughs] when you balance all that together, but this is what we tried to do. So it’s not only Mass Effect 1, although I would say it has the most impact because of its notion of exploration, and it’s a central theme.

This is an odd question but what’s it like to work on a game for five years?

Yeah it is, that’s why I’m asking! You don’t often hear that.

It’s long and I’m one of the people who have been there since day one on the game. Looking back, there are very few of us who are left from day one [laughs], but I would say its two things. It’s difficult because it’s long and it means it’s long because you try and fail. So you have those moments of doubt. Are we really doing the right thing? Because otherwise you’re successful and development wouldn’t be that long. But you try and you fail and you try and you want to push things. And it’s sometimes tiring, and draining, and all that. On the other side of the coin, being able to say I work for a studio that allows me to work for five years on a game to ensure quality is there, that’s something fairly rare in this industry. For developers, it’s actually kind of a luxury to be able to do that. So it’s both sides. Why did it take five years? Because you were trying so many different things, were you given that time to explore new ideas, what was it?

It’s a mixture of creative things and more pragmatic things. For example, we changed engine. Obviously changing engine is huge, it’s a drastic change. Suddenly, you have to redo all your art assets. So everything we’d done for the trilogy, we have to redo it. So this is just one example. Add to that although there are a lot of Mass Effect veterans on your team, there are also a lot of new people on the team. So you have to reshape the culture of the team to make sure they’re true to the franchise. So that’s one aspect of it. Then there’s the creative aspect of it where yes, we try things, we fail, we redo them again. This is where the luxury part of a studio like BioWare comes in. You can go to the leadership and say well, we spent six months building X and it’s not really working, we could release something that isn’t great. I’m exaggerating, obviously! So for example, you decide to add the Nomad. It’s cool we’re not in 2007 with Mass Effect 1 anymore. The industry has evolved. So you can cover a shitload of terrain with the Nomad. But you see the idea. You have all those pieces and it’s massive. It goes with the ambition.

It seems like there are a lot of elements in play – the new combat, the open-world, the exploration. Did you ever feel like oh god, it’s not going to come together?

Yes. Obviously. You always get those periods of doubt. Because the game is massive, all the pieces can stick together well later because of the sheer complexity of it. In my position, that’s clearly my job to keep perspective of it. But yeah, we went through phases where we thought this is the worst game ever made. It’s terrible. And the unknown, because doing open-world… that’s not BioWare’s speciality. We tried procedularly generated content. We tried that. We really tried. We built tools and we played it and we thought yeah… maybe. It could be good but we still need to be more open because if you talk about exploration, what’s the point if you’re in a corridor. So what should we do? And this is why we decided to do memorable planets. Everything is hand-crafted. Everything is placed. Pre-placed. We add a bunch of things, but not randomly. If you do side-quests, there has to be a narrative touch to it. It has to be all that. As a consequence, we can’t generate as many planets as other games, but our hope is that it’s meaningful.

Depends on the subject. We have to distinguish the public fan feedback and the more discrete feedback. What people often don’t realise is that we receive, on a daily basis, letters, emails – a huge amount of support. During the Mass Effect 3 ending controversy, we received a huge amount of support. But those people come to us. Stories like I was pregnant during a very difficult moment and the game changed my life and I’m calling my kid Garrus, for example. There is a number of them. When we go to Comic-Con, the amount of people that stop to say negative things is very minimal. I was in London when we were doing a press event years ago and someone stopped by and said “I hated the Mass Effect 3 ending and you ruined my life and I will never play a BioWare game again,” and all that. And at the end he asked me what I was doing in London. I said I was promoting the DLC. And he said “oh yeah, I’m going to buy the DLC” [laughs]. Having said that, our job is to take all that feedback and there’s always a root. And after it’s expressed, sometimes aggressively, you want to look at the root. They’re trying to say something. This is what you want to spot and what you want to address.