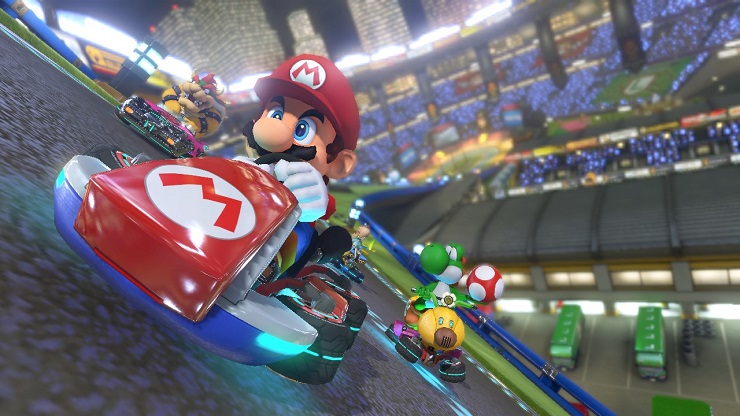 2016 had some good racing games, a few mediocre ones, and one stunning racer. But how do developers follow Forza Horizon 3? It had near perfect handling, a huge variety of insanely detailed car models, and an open world that was filled with track layouts that offered diverse and challenging races against Forza’s trademark Drivatar AI. Whether you’re a fan of arcade racing or simulations, Playground Games catered to almost everyone.

One way to follow Forza Horizon 3 is, well, to make more of it. Blizzard Mountain was fantastic fun, but there is still the matter of the second, unannounced expansion. What will it be? Where do you go after you’ve already been to sunny (and occasionally very rainy) Australia, and then off to the snowy roads of Blizzard Mountain?

The simple truth is, I have no idea. Forza Horizon 2 offered storms in its DLC, 3 has given us blizzards, so will the next expansion offer an even more extreme weather scenario, or get back to basics and go for a more traditional racing experience? Perhaps we’ll go into the heart of a new city for some Need For Speed action, harking back to the glory days of Underground 2. Whatever Playground Games does next, it’s bound to draw attention.

But that’s just the start of 2017. There are twelve months to consider, with a number of different teams that are working on new racing games. Polyphony Digital is one such team, working (for the longest time) on Gran Turismo Sport, the spin-off of Sony’s flagship racing series. It’s difficult to discuss Gran Turismo without inevitably comparing it to Microsoft’s Forza series, and the comparison has grown less and less favourable as the years go by. Gran Turismo may well be the first major driving simulator to hit consoles, the original deserving its place in history as one of the best of its kind, but Polyphony has struggled to keep that excitement going through its five sequels. The career mode has grown stale, becoming a slog as you grind out credits from the early events to be able to afford a car capable of competing in later races, and the racing itself hasn’t really improved since the PS2 days. 6 definitely improved the handling, with cars feeling lighter and more responsive, but the AI was still rigid and unmoving. It didn’t adapt to situations, it didn’t make mistakes. It was like The Terminator of driving AI.

But that was on PS3. With GT Sport, Polyphony has the immense processing power of PS4 to bring more realistic, adaptive and reactive AI to the race track. But with GT Sport focusing primarily on eSports and general online racing, and judging from player feedback from hands-on events, the AI needs a lot of work. Hopefully that will be addressed during the unspecified number of months before the game’s eventual release. Given that Sony wants Gran Turismo to promote both the PS4 Pro and its new VR headset, it’s probably a safe bet that Polyphony Digital will be working hard to ensure that all players enjoy the final product.

Gran Turismo Sport may well face some stiff opposition though, as it’s likely that Turn 10 Studios will bring a new Forza Motorsport to Microsoft’s Xbox One platform (and Windows 10, surely) later this year. The yearly, alternating pattern of traditional Forza and Horizon releases points to Forza Motorsport 7 arriving in Q4 2017, after an E3 unveiling in June. If this is the case, what exactly can we expect? Forza Motorsport 6 was probably the best circuit racing experience to date, thanks to its balanced handling model, stunning Drivatar AI and a great selection of tracks from around the world, all wrapped up in a fun career mode that never stopped you from progressing. Genuinely, I will be happy with more cars, more tracks and perhaps dynamic weather, assuming a new game does arrive this year. It could provide a great visual treat for new Scorpio owners, too. Speaking of new console owners, what about the Nintendo Switch? Mario Kart could well be arriving this year on the new home console/handheld hybrid, to the delight of many, I’m sure. But will it be a port of Mario Kart 8, maybe simply a download of the Wii U game via the rumoured digital backwards compatibility, or will we see Mario Kart 9 so soon? Maybe we’ll find out at the Nintendo Direct this month.

EA has already teased a big franchise for Switch, could that be a new Need For Speed? Unlikely, you may think, but the last title was released in 2015 so it’s ripe for a new entry in the series this year. Need For Speed’s 2015 reboot wasn’t exactly the best game in the world, but it was certainly a step in the right direction and it provided a good foundation for a return to the good old days of the Underground series. Hell, maybe EA will even add Underground 2 to the PS2 Classics range on PS4? Wishful thinking, I know.

If I was to wish for anything in the racing genre, however, it would be for Codemasters’ Grid series to make its debut on this generation of consoles. No, Grid 2 via Xbox One’s backwards compatibility does not count. Grid Autosport was great fun, with some good AI that felt quite realistic (if a little overly aggressive) and its range of tracks and racing disciplines was very impressive. The team behind Grid has been quiet for a while now, so hopefully they’re hard at work on a new addition to the series. After the success of Dirt Rally, Codemasters must be keen to bring another big franchise back to the front of the grid (sorry), to compliment the inevitable F1 2017. F1 2016 was a huge improvement over the lacklustre 2015 game (which was at least improved via updates), but it’s still essentially the same game it has always been. When you’re creating a licenced game it must be difficult to bring something genuinely fresh to the series, but Dirt Rally, WRC and Valentino Rossi’s MotoGP game all included extra features, like career modes that involved moving through lower classes before getting to the top level of their respective motorsports. Curiously, despite many of today’s top young F1 drivers coming through the likes of GP2 and GP3, none of these classes are represented in the F1 titles. It could add an extra layer to the 2017 game, plus it’s a great way to get new players used to the handling and speed over time.

Probably the best game for sheer choice of classes and disciplines was Project CARS, though. It even had Ginetta Juniors, a personal favorite of mine, and the Renault Clio Cup, and offered Oulton Park as a venue, as well as many other tracks that you just don’t see in most console racers. With the sequel already announced, claiming it will arrive in 2017, but considering the lengthy development of the original (including several delays) I think we can all be forgiven for expecting another long wait. Hopefully the handling will be improved for controllers from the start, not requiring players to tinker endlessly with sensitivity options in order to find a playable setting. It was this side of the game that eventually caused me to stop playing, as it never truly felt good to drive. With Project CARS 2, the focus really just needs to be on creating the right handling setting from the start and to tweak the AI in order to stop it being overly aggressive, and simply to keep the freedom of choice allowed in the first title.

Of course, this is simply a wishlist. Many of these games may not happen in 2017, or at all. For racing fans like myself it would be one hell of a year if they did arrive, and it would certainly be a good way for developers to follow Forza Horizon 3.