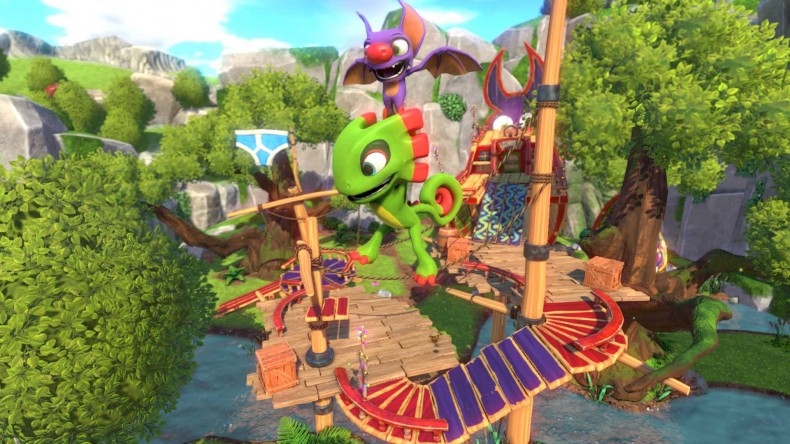 Within seconds of playing Yooka-Laylee – literally seconds of picking up the pad and skipping through the opening cutscene (come on, we all do it) – you’ll have the biggest grin on your face.

But hoooo boy even with that knowledge, Yooka Laylee attacks your nostalgia glands with military precision, tickling them in all the right spots.

It with the titular characters sunbathing on a rock, having a conversation in grunts while text scrolls underneath translating their noises. They resolve to find the Pagies scattered across the world from a golden book Laylee found under the floorboards at home, a book that the devious Capital B is after. And so you set off in a world that’s tightly designed, dotted with treasure chests, bursting with personality and life, painted with the brightest of colours, and stuffed with interesting nooks and crannies you want to investigate.

“I remember this life! This life of colour and joy and platforming and fun and thrills! God, life was great when I had a Nintendo 64. Before I had to do mundane adult shit like going to work and paying council tax and learning how to cook vegan food because Kate read that blog on Cosmo that people who eat vegan food live two years longer on average. What’s she going to do with those two years anyway. And what the shit even is quinoa. I’m not going to ask for it in Sainsbury’s, if that’s what she’s thinking. She can get it her bloody self.” But first, the tutorial

But within literally seconds of having the biggest grin on your face, you’ll find yourself grumbling under your breath.

Not because of the quinoa. You’ll grumble because Yooka-Laylee doesn’t hand you all the moves you’ll want right at the start. As soon as you gain control of Yooka, you’ll run up to the first treasure chest, press Square, and nothing happens. Maybe it’s X? Circle? Triangle? Nothing works. “WHERE’S THE ATTACK MOVE?!” you’ll shout, stabbing the buttons with increasing anger, the unopened chest taunting you.

To unlock the spin attack, you have to go through the tutorial, which hands over those moves one by one, from the spin attack to the double jump. This slight irritation at not having all the moves straight away was the only stumbling block in my few hours with the game and even then, in the bigger picture, it does make sense. Yooka-Laylee a game that is built around the slow dripfeed of moves, which are bought through collecting enough quills. Collect 30 quills and you can unlock a sonar for Laylee, ability to swallow objects and spit them out like fireballs and so on. The idea is that there you head back to areas you’ve already visited when you have the right moves, as some puzzles can only be solved with certain abilities. You might need to freeze spinning platforms by gobbling up nearby ice-planets and spitting ice blocks at a distant panel, for example, or you might need to a roll move to scamper up an incline that’s impossible to climb on foot. You’ll instinctively build up a mental checklist as you poke and prod your way around the world, making a note of where you need to revisit once you’ve unlocked more moves.

But because I’m a massive millennial mewling manbaby who wants everything straight away because THIS IS THE AGE OF ENTITLEMENT AND WHY CAN’T I DO EVERYTHING IMMEDIATELY, being slowed down by that tutorial is a tad frustrating. It’s worth the wait though – there are jokes peppered throughout the tutorial, there are areas you’ll make a note to revisit (‘PAGIE’ spelt out on fire-torches? Hmmm) and at the end of it, you can finally dive headfirst into a gooey pool of warm nostalgia.

There’s no understating the joy when you’re finally let loose to collect Pagies and Quills, your path to collect new moves, expand old worlds, and unlock new ones. Poking and prodding at the world around you, investigating interesting structures in the distance, working out how to climb them, chatting to NPCs hanging around the world. Games nowadays are eager to usher you from set-piece to set-piece, funneling you along their rollercoaster of thrills and spills. Yooka-Laylee, being a throwback to 3D platformers of days gone by, lets you explore and mess around at your own leisure. It’s such a relaxing, carefree game to play. If you get stuck trying to work out how to collect a certain Pagie, you can move on.

Collecting each Pagie offers a different challenge. One Pagie is slightly torn and you need to find the rest of the missing pieces to put it back together, which are scattered inside a dense forest – a challenge of your exploration skills. Another Pagie is only offered when you win a scramble to the finish line on a tight track, where you need to hit energy refills through to keep using your high-speed move – a challenge of your racing skills. Another Pagie is only offered when you open up a shooting range by smashing the ceiling to let in light, then using your fireball spitting move to complete the range – a challenge of your Quill-collecting skills to unlock those moves.

With a game that’s about plucking the hidden Pagies and Quills out of the tightly-guarded corners of each world, it’s no surprise there are other surprises tucked away. There are Ghost Writers hidden in the first world, five ghosts that all require a different technique to catch. There are tonics, which give you a bonus attribute (such as Yooka’s roll move costing less energy) that can be unlocked through defeating a certain amount of underwater enemies, completing the game, and so on. You’ll even find the hero of a popular indie game who needs your help to find treasure on top of a towering, dizzying structure made of spinning platforms and tricky jumps. No spoilers here but hopefully there will be more cross-game surprises because the first one you’ll find is brilliant.

Is it new? It it old? Does it matter?

You’ll notice for almost all of this preview, I’ve been describing Yooka-Laylee as a new thing. As though you have no idea what it is. As though you’re some sort of clueless buffoon who has stumbled into this preview because you typed “God is weak” in Google to find an article you can post in that Facebook status your religious aunt posted, you made a typo, and here you are on God is a Geek reading about a chameleon and his bat friend. Welcome.

That’s the strange contradiction at the heart of Yooka-Laylee. It’s great because it’s familiar, it’s refreshing because it’s harking back to our past, it’s comforting because we know exactly what sort of game we’re getting. It’s hard to imagine what this will be like for someone who hasn’t played 3D platformers before and doesn’t know what Banjo Kazooie is (“Yeah I know Banjo Kazooie. They play country music, right?”). But once you fall into Yooka-Laylee’s hypnotising rhythm, your gaming knowledge will barely matter. Collecting Quills, buying new moves, revisiting old areas with your new skills, everything in Yooka-Laylee is executed with veteran skill and a confidence most developers cry out for. This isn’t a game that’s had the charm and personality beaten out of it by focus tests and sales figures and marketing checklists.

Yooka-Laylee is a game made by developers who know what they’re good at and are damn well proving it.

The best tribute that can be paid to Yooka-Laylee is that after a few hours in its presence, the first thing I did when I got home was revisit Banjo Kazooie to get a hit of that gooey nostalgia again. With A Hat In Time and Crash Bandicoot Remastered on the way, Yooka-Laylee should lead the charge for a brand new era of 3D platformers. Maybe then Yooka-Laylee will replace Banjo Kazooie as milestone we’ll refer to when writing previews of platformers in 2027…