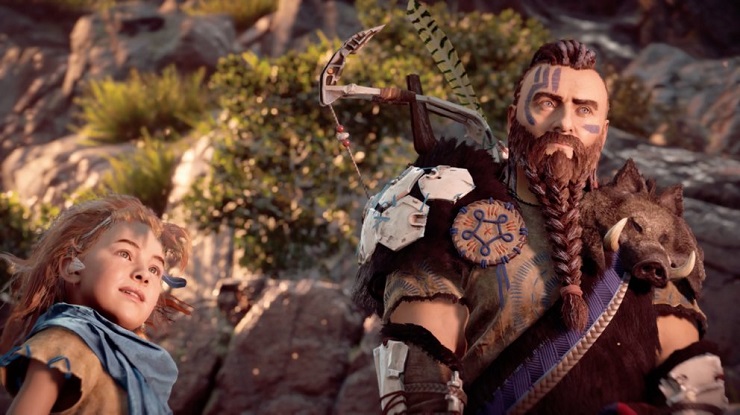 It’s a tricky one, being a dad.

You’re never quite sure if you’re doing it right, or whether your idea of parenting isn’t quite the way it should be done. My daughters are now seven and four, and if time has taught me anything, it’s that the mark of a good father is the way your children run to you when you come home from work. I close the door behind me, and both of them come running full pelt at me, screaming “Daddy,” then throwing their arms around my worn down, tired old body. I may not take them to Alton Towers every week, or buy them another pack of Shopkins with every paycheck, but I reckon I’m doing OK.

Playing Horizon Zero Dawn hammered home the role fathers play in their children’s lives, specifically their daughters. Now I know Rost isn’t Aloy’s father by blood, but he does everything he can for her. You can see in many of their interactions how he can be too overprotective and stubborn, but you can also see how much Aloy worships Rost, and you can hear it in her voice just what he means to her. When I was growing up, I always had a problem with something my father said or did. He was only doing the best for me, and I know that now; most of my transition from child to teenager to adult has been under the watchful and guiding eye of my dear old dad, and he did a great job of making me who I am. Not blowing my own trumpet, but he gave me the right tools to be a good man, husband and father. I see a lot of my dad in me, and I’ve instilled a great deal of his ideology in my own kids: good manners, appreciating the outdoors, being creative – the list goes on.

I can also see a lot of similarities between myself in Rost; he’s strict on Aloy, but only wants to show her the best way to protect her from the dangers of the world. It terrifies me that at some point in the not too distant future, they’ll be going out without me to play with her friends, or walking to school on her own; what if she gets hit by a car? What if someone takes her? What if? What if? What if? It’s funny, really. Ever since becoming a dad, I’m so much more emotional about everything, especially videogames. There are two other games that really strike a chord with me when it comes to looking after your daughters through the worst possible scenarios. Lee and Clementine’s relationship in season one of The Walking Dead was one of the most bittersweet tales of fatherhood I’ve ever seen; the evolution of babysitting this stranger, to caring and adoring her is profound. It took a lot for me to get over that moment when she has to kill him at the end of season one. After everything she’d seen – everything she’d been through, Lee was the one who was always there for her. Now he was gone, and she was left all alone. You often wonder how your children will go on without you; not in an arrogant way, or even a morbid way. I think you’re just worried they’ll be alone in a world without a man to protect them. They’ll still have their mother, I know – maybe it’s a man thing.

Another is The Last of Us. This game broke me to tears, and showed me the sadness and pain of losing a child. My brother died when I was six, and looking back on that time, I can remember just how strong my dad was. It must’ve been the hardest thing he’s ever had to deal with, and to put on a brave face – to keep smiling despite how much his heart was hurting…I applaud him. Throughout the entirety of the game, Joel and Ellie form a tight bond and the way he fights for her is what any decent father would do. And that decision at the end – every man would do the same. Seeing these parental choices play out through videogames is something we can all do, and even learn from. We can learn from their mistakes and endeavour to adhere to them. Seeing the way Rost is with Aloy reminded me that I give my own daughters guidance, and the freedom to make their own mistakes rather than coddle them through everything they do. I may not be sure if I’m doing it right, and nine times out of ten I question every decision I make, but kids are smart – my kids are smart. Playing Horizon Zero Dawn showed me that maybe – just maybe, I’m not that bad after all.

Video games are cool. Don't let anybody tell you any different.
MORE LIKE THIS
GuerillaHorizon: Zero Dawn