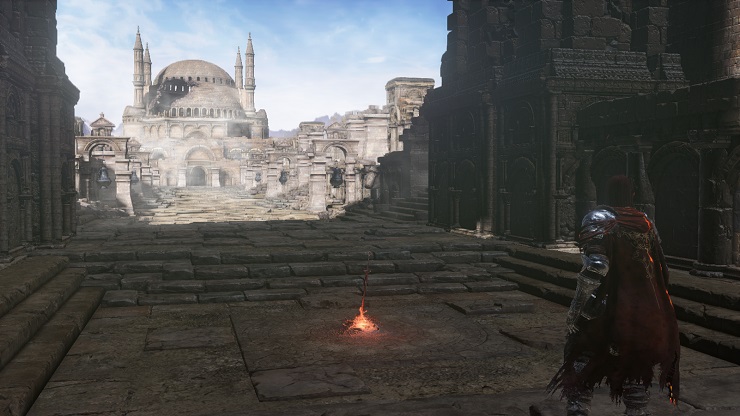 How do I talk honestly about Dark Souls? It’s doubtless a fascinating series, filled with deep lore, and featuring one of the best combat systems in recent memory. But it’s far from perfect, despite what its biggest fans will have you believe. They so readily defend Blight Town, despite its horrendous framerate and awkward design (not to mention the cheapness of those toxic darts); and let’s not forget the boring, unnecessary inclusion of Lost Izalith, another area with a terrible framerate that should have remained lost – culminating in the worst boss fight in the entire series: Bed of Chaos. What a shit show that was.

But before you grab your pitchforks and torches, I should say that it’s still a fantastic game that I loved playing through. Ornstein and Smough, Capra, the whole Undead Burg and Parish, all exquisite examples of the great design present throughout the majority of that first game. The gameplay itself is still some of the best available in modern gaming.

The second game is another marvel, too. “But Gaz,” I hear you say, “you’re not allowed to like Dark Souls 2!”

Tish, pshaw, nonsense, I say. Dark Souls 2 is just as good as its predecessor, and its Scholar of the First Sin version is an absolute stunner. That bastard Pursuer is terrifying when he shows up in unfamiliar areas, and the enemy placement overhaul was a genuine game changer. Its three DLC episodes were brilliant as well, boasting some cracking boss fights that are among the best in the series. This is all before mentioning the wonderful multiplayer aspect of the series. For an antisocial gamer like myself, the idea of random PvP encounters filled me with dread, but there’s a certain etiquette to it that really helped to ease my worries. It didn’t stop me being turned into mush by giant Greathammers, or being skewered by various blades, or being burned alive, or poisoned by cruel weapons infused with nasty substances. I recall one of my first invaders actually gave me some weapons and armour, content with simply watching me fight enemies, rather than actually trying to fight me.

And it’s that kind of experience that underlines the quality of the Dark Souls multiplayer component – and its largely excellent community, frankly. The risk/reward mechanic of becoming human, allowing you to summon in help from other players (and select NPCs, at certain points), but also leaving you vulnerable to invasions, is a masterstroke of design. Although voice chat was enabled in later games, my preferred option is to play without, communicating only via gesture animations. Invasions would usually involve bowing before the fight began, a nice show of respect before my inevitable evisceration. Bows and waves and, of course, Praising the Sun are exchanged upon the arrival of summoned players, too, another sign of respect and thanks in the world of Dark Souls. I even found myself putting down my own summon sign after a while, paying it forward as it were, in order to help those struggling with certain areas and bosses. For someone like me, actively engaging in social gameplay is almost unheard of, but I loved it.

Now, to the matter at hand: Dark Souls 3.

When it first arrived, I was very excited. I played for hours, drinking in the new and improved animation and the sumptuous visuals, relearning how to play in this latest adventure. I engaged in jolly cooperation, both summoning and being summoned, and obviously got reduced to human soup by invaders. It was good fun. Good, but not great. Areas began to feel too familiar, and when I even visited an exact replica of one of the original game’s most iconic places, my interest was lost. The first two games had their own identities, their own sets of lore, but Dark Souls 3 felt like fan fiction with its over-reliance on referencing that first game and its characters. While some thought it was good that Miyazaki brought his series full circle, I found it quite lazy. Old areas were rehashed and renamed (Farron Keep fooled nobody, Miyazaki), old NPCs reappeared for no reason whatsoever, and these things grated on me to the point that I grew tired of the game altogether. Just weeks after release, even with over thirty hours on the clock, I just couldn’t be bothered carrying on.

Cut to February 2017, nearly a year after Dark Souls 3’s UK release, and something in me decided to give it another try. I’d finished both previous games in the trilogy – was I really going to leave the finale unfinished? No. No, I was not. I restarted the game, using my experience to get through the game much quicker this time, but took my time to follow some NPC story arcs. Despite the seemingly random nature of their appearances, I settled on following Anri of Astora’s quest to defeat Aldrich, Devourer of Gods, Siegward of Catarina (how could I not aid the Onion Knight?), and even Sirris of the Sunless Realms. With a lot of exploration, and one or two cheeky looks at a guide in some cases, I completed all their quest lines. With the exception of Sirris’ quest, all of them felt worthwhile and I genuinely loved that moment when Siegward showed up to fight his old friend, Yhorm. It was at once brilliant and sad, as the old knight fulfilled his promise.

Every fight in Dark Souls 3 is a challenge, but the bosses are another thing entirely. Even Iudex Gundyr, the tutorial boss, gives you a thorough beating before you eventually learn his moves and finally emerge triumphant. There are some beautifully made creatures at the end of almost every region of Lothric. The Dancer of the Boreal Valley looks amazing and performs a graceful ballet of death with her twin blades; Aldrich is a disgusting, bloated monstrosity that moves like a snake; and of course there’s the bloody Nameless King, the hardest boss in the game, riding his dragon and being horrifically overpowered. But the best boss in the game has to be the Abyss Watchers. Despite being one of the game’s early battles, the combination of their wonderful design, excellent moveset, infighting, and that beautiful music, just makes it an incredibly special moment. A memorable moment. Memorable moments come mainly via the previously mentioned multiplayer element of Dark Souls, and this third game is no different. After defeating the Crystal Sage, I decided to place my summon sign outside the boss door to help people out, knowing full well that it can be a tricky fight if you’re not careful. But remember that risk/reward mechanic that I mentioned earlier? Yep, I ended up being invaded while I waited. I cleared the next room in preparation for the battle to come, but nothing happened. I cleared the next room and the next, moving out into the open area beyond, and it was only then that I saw the red silhouette of the invading spirit, but I was not seen. I’m not the dishonourable type, so instead of going on the offensive, I merely chased my foe down, trying desperately to get their attention. Eventually I was spotted and we moved into the first room that I cleared, before bowing and readying our weapons. You might be expecting an epic end to this story, but you’d be wrong. I was annihilated. I think I got in one hit. But it was still great fun.

Or there was the time I was summoned for the gruelling battle with the Dancer, only for the host to die within seconds. I’d barely pushed through the fog door. So, I put my summon sign down again, only to be summoned by the exact same player! They also summoned another player from the previous attempt, and dropped an “I’m sorry” stone to apologise for that ill-fated first go. It sums up the fantastic Dark Souls community perfectly. And yes, this story has a better ending than the last, as we went on to defeat the Dancer of the Boreal Valley in a pretty tense fight.

It’s nowhere near a perfect game, with its incredibly long loading times and multiplayer plagued by lag, but I definitely settled into this final attempt to finish Dark Souls 3. I found myself enjoying it immensely, despite the likes of Farron Keep and Irithyll trying their best to ruin the experience (resurrecting the Anor Londo archer experience was beyond cheap, just as it was back on that walkway in the first Dark Souls). Although some frown upon summoning for bosses, I’m grateful to the player that helped me beat the first form of the end boss, before they died valiantly at the beginning of the second phase of the fight. Alone, I thought I was done for, but after an age long battle that tested my reflexes to the limit, I downed my final Estus flask and stayed strong, emerging triumphant on the first attempt. I’m not ashamed to admit that I punched the air at that point. Nearly a year after I originally started the game, and around four years after starting the first game, I can finally say that I have finished all three games in the Dark Souls trilogy.

Even the Nameless King couldn’t stop me.