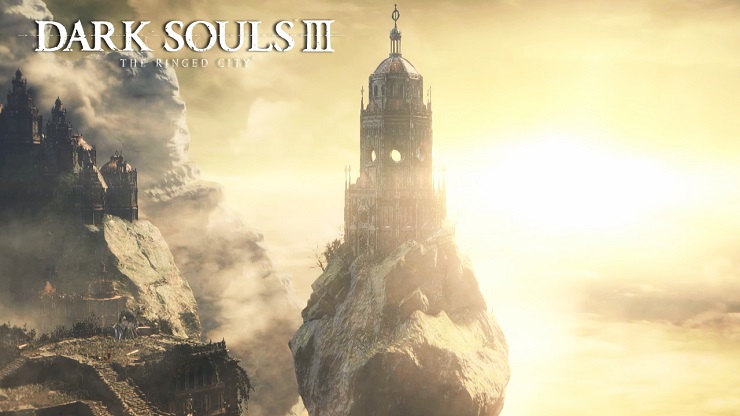 The final piece of Dark Souls content is upon us, and for lore fans it provides a fitting conclusion to the story that has persisted over three games. There is a sense of finality in the content that shows off some of the best parts of the series, but also a lot of the worst parts, particularly in the early part of it with some seemingly impenetrable sections that require a very different style of play to get through. That’s not to say that The Ringed City doesn’t deliver; it does and in places with some style.

To access it you will need a character that has at least got as far as the Cathedral of Deep and completed the first DLC, Ashes of Ariandel. If you didn’t play the first content release, you will need to have completed the final boss. At the Kiln of the First Flame bonfire you will see another bonfire available just behind it that will transport you to Dreg Heap, the starting area for The Ringed City. Thematically, The Ringed City feels very much like the ending to the series with the early game finding players literally plunging further and further down into the depths of the city like Dante’s descent into hell. Along the way there are plenty of new enemies to tackle and a triumvirate of bosses with a further optional one with which to display the skills and weapons you have collected along the way. Boss fights are varied and thrilling with the final boss being a particular highlight.

Items to find include new and unique weapons, spells, armour, and shields, as well as a new covenant and a number of +3 rings. New enemies will also challenge you, and some in particular will require you to play in a vastly different way to that which you are used to. It is these new enemies, huge floating angels, that are the worst part of the DLC and represent (pre-patch) an almost impenetrable barrier when you first begin. The solution to despatching them isn’t immediately obvious and the damage they do with a battery of shining quills is enough to kill in one or two blows. There is a number of handy safe spots from which to dash between to avoid the endless attacks, but to add insult to injury if you stay too long you will be subjected to curse damage which will insta-kill you should it build up too much. It feels unfair and unnecessarily punishing. Couple two or three of these angels with a poison swamp and countless enemies that all want to kill you and you have an area that I’ve still not fully explored and will have to go back to comb for all the items it has to offer.

Thankfully, the angels are confined to the first area alone, and once past them and the first boss you are in to the Ringed City proper, and it is here that the DLC really opens up and starts to shine. There is a return of familiar NPCs as well as a questline to follow which reveals certain secrets that the DLC contains, as well as an area that weaves in an around itself with plenty of items to discover and a few mysteries to solve. The PvP elements are in place as ever with key places rife for invasions as well as a number of NPC invasions that drop interesting gear. The multiplayer aspect received an overhaul in Ashes of Ariandel and it has been further tweaked for The Ringed City with a fascinating blend of a boss fight that incorporates Covenant allegiance and PvP elements. The multiplayer is often where the Souls series shines as battles are a mixture of wit, luck and skill, and incorporating these battles into a boss fight is a curious balance that works. Furthermore, if you solve one of the key mysteries of The Ringed City, you can resurrect the boss at the cost of a number of souls to continue to battle other players should you wish.

The Ringed City is a fitting conclusion to the Dark Souls series and certainly feels like the ending to a revered series. The final boss is a stunning end to a journey that starts off a little shakily, but ends with some dramatic revelations and interesting boss fights along the way. For lore fans there is plenty to absorb as well as the culmination of a favourite/reviled NPC, and for those, like me, that just enjoy the mechanics of the combat there are plenty of new enemies and a cool new PvP mechanic to keep you busy.

The Ringed City DLC is a mixture of things, unfairly difficult in the beginning, it opens up and delivers a thematically fitting end to the series of the whole. Great boss fights as well as a new PvP mechanic elevate it above the previous DLC.

You may also like
Dark Souls 3dark souls 3: the ringed city DLCPC