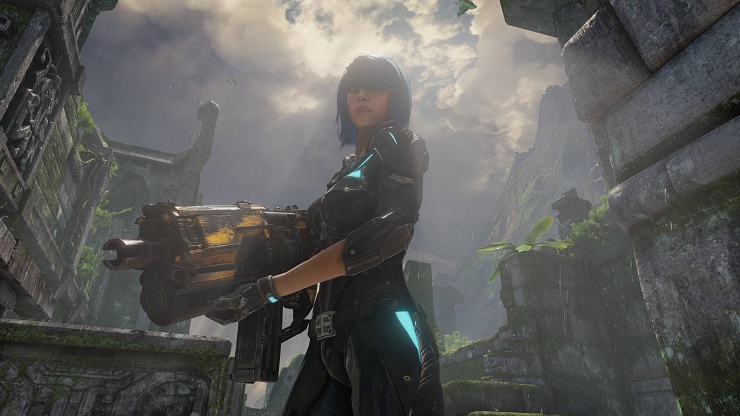 There are a few franchises that excites me whenever their names are spoken because of my background in games and when I started playing religiously. Quake is without doubt one of those games, so when Quake Champions was announced it was exciting news. It’s one of the franchises that made competitive gaming a recognised activity, it was one of the biggest games in the era I started gaming, and it’s one that has largely stood the test of time and continued to draw players to it. Quake 3 Arena garnered near-perfect scores all-around, and it is held in high regard even to this day.

Quake Champions is a step into the future, almost two decades after Quake 3 Arena’s release, and it crashes onto the scene with its trade mark look and feel that we’ve come to know so well. Over the past few years we’ve seen an evolution of online games and how they present themselves with characters and their abilities, and often vastly different styles of play. It’s the MOBAs like Dota 2 and League of Legends, and the MOBA/FPS hybrids like Overwatch and Paladins leading the charge on these changes so it’s almost expected that this will be the trend of games going forward for a little while; even if that game is a historical figure in gaming to begin with. Quake Champions is an amalgamation of what we know of the Quake franchise and the newer format of MOBAs and FPSs, as now you have characters who possess unique abilities, varying health and shield pools, and movement speeds. The pace of the game is just as intense as you’d expect from any Quake game worth its salt, so brace yourself for a hell of a ride. The first thing that anyone should try is the Deathmatch mode, which makes everyone a target and means you’re a target for everyone. It’s intense, it’s fast, and you will likely die a whole lot before you can get to a point of taking a couple of kills for yourself. The maps are old-school in that you’ll need to learn where everything lives whether it’s health, armour, weapons, ammo, or the Quad Damage buff, because these are the very things that every player on the map will be competing for. The Quad will spawn periodically and everyone in the game will be told that it spawns in 15 seconds, allowing the battle to take place around this one point. The rocket launcher, lightning gun and railgun spawns are also heavily camped areas since they’re always the weapons of choice for the Quake veteran – and rightly so, as they’re pretty much the best. Knowing where these are on every map is almost as essential as the ability to aim, strafe jump, and rocket jump.

Maps are relatively small, but to me this felt like holding onto what made Quake such an intense experience. Brawls would always take place around the most contested points, the aforementioned spawn points that are so sought after, and it always gave you a very good idea of where your enemies are or where they would be heading. This was especially true when the 15-second notice on the Quad damage power up was heard. You had to decide whether you’re going there before everyone else appeared to try and hold dominance over the area, or whether you wait a little while for others to duke it out before swooping in for the cleanup. Either way, there is always going to be something happening and there’s really no escape from the action. For me, this is one of the key parts that makes Quake Champions such a fun game. While it was an inevitable change, character abilities are something of a contentious topic. While many of the purist players of the Quake franchise may take umbrage to the addition of unique abilities, what I found was that it wasn’t actually as offensive as those I’d spoken to about it had made out. Each character has a unique ability and a unique passive effect, and it does change how the game is played, but not to any levels that would destroy what we know and love about Quake. Slash, one of my favourite characters in Quake Champions, gains movement speed and creates a Tron-like trail from her rollerblades that can then be detonated. When an enemy steps on the trail they instantly start to take damage, at which point the trail can be detonated for an easy kill. A few other abilities include Sorlag’s toxic spit that he can cover a small area with, Nyx can cloak herself, but can’t pick anything up or shoot, Visor can see through walls and detect Nyx while she’s invisible, and so on. I think that in trying to keep these abilities inoffensive and not take them to the extreme levels of overpowering, they have been a little undermined since most of the time they don’t make much of an impact to the game. They can be outright avoided or just don’t make enough of a difference because in combat what really matters is the weapon and the skill of the player.

Presumably the final release of the game won’t have all of the characters unlocked like during the Closed Beta, so there will be a need to progress through the game and unlock a few of these characters as you go. There are multiple types of currency, the dreaded (for some) loot box system, daily missions, and a whole load of cosmetics to be unlocked and gained throughout your time playing. There are also different weapons that you can equip into your loadout, though only one alternative variation is available per type at this time. From looking at these variations of loadout, they didn’t look to be game breaking as they were Q3 variants of the same weapons. These should be purely cosmetic, as I didn’t notice any clearly marked changes to damage output or stats. The weapons don’t break away from the Quake universe and should be very familiar to everyone. You have the Gauntlet, Machine Gun, Shotgun, Nailgun, Lightning Gun, Rocket Launcher, and Railgun. Personal favourite is the Railgun and Rocket Launcher, but you will find a lot of people also going for the Lightning Gun due to its immense damage output so these are likely going to be your first choice, too. Be warned, though, that if you’re used to the likes of Unreal Tournament or even Pharah from Overwatch, you’re going to find that the splash damage on the rocket launcher is a little smaller than you were hoping for. Having played a lot of Overwatch in the past few months this was a little jarring to me at first, but the idea is to get those direct hits. Quake is no walk in he park, it will require you to be on your A-game to be on a level with those you’re playing against.

For me, Quake Champions is a great return to the games that defined my early FPS and competitive gaming experiences. It reminds me of its predecessors, the Quakes, Dooms, and Unreals from the days of yore. It reminds me that while games may have evolved, there is a way to recapture the magic of the classics and bring it into today’s gaming sphere successfully. Quake Champions is a hell of a lot of fun, brutally difficult to excel at, and ultimately satisfying when you smash a game and wind up at the top of the scoreboard.

Bethesda is giving everyone a free Champion in Quake Champions