Cars 3: Driven to Win is full of ideas 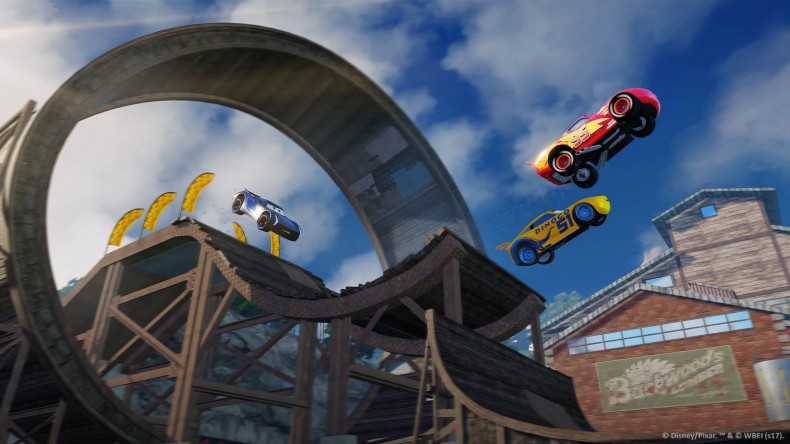 The Cars games actually have a fair reputation. Certainly a better one than you might expect for licensed games based on a family intellectual property. The game series is actually something that has been around for over a decade now, which is a run most would be proud of.

Now with Cars 3 about to race its way into the cinema, perhaps surprisingly we are about to get a new entry in the series of games. And I mean surprisingly. With the dissolvement of Disney Infinity last year, it seemed the House of Mouse was getting out of video games. To go alongside that divorce from the toys-to-life game, Disney Interactive Studios closed entirely, and developer Avalanche Studios with it. Disney was done with the medium.

Now, just a year later, we are getting Cars 3: Driven to Win with a newly re-founded Avalanche Studios, this time under the watchful eye of licensed game aficionado, Warner Brothers Interactive Studios. This is welcome news too, as the developer has proven itself as an underrated asset, always able to find fun in games based on other IPs, a notoriously hard proposition. It’s great to see them back and running and to boot, seemingly putting together a fun looking kart racer. “It’s been a great title for us to work on.” Game Designer Troy Johnson reveals on coming back. “We worked on Cars 2 many years ago. It’s fun to revisit what we did in the past and improving on what we could this time around. Learning from what we learned and other design principles and things over the past couple of years that we can apply. It’s just been awesome. Continuing our relationship with Pixar has just been a blast too. It’s been awesome.”

Perhaps the surprising thing about Cars 3: Driven to Win, bar its existence, is that when you get down to it, it is quite full of ideas. That’s encouraging considering it’s going up against the behemoth of the genre, Mario Kart. The moment to moment seems to be dictated by always doing something. Be it finding a shortcut, trying to fire a weapon, or either drifting, two wheeling or driving backwards over a specific boost pad, it’s clear Avalanche wants you to be thinking about something new on every turn. This, at least on the first time of picking up the controller, can be somewhat overwhelming. Lots of early losses came when I played the game, with a real sense of challenge in trying to build and manage the boost system. As you get comfortable in the systems though, the vision of what Avalanche is trying to do seems pretty clear. This moment to moment busyness caries over to the broader structure of the game too. There really seems to be a whole lot in here. There is your standard racing mode, a racing with weapons mode, a stunt based mode and also one based on chasing and blowing up other drone cars. That last one is actually a welcome distraction. It was made very clear that the cars you are blowing up aren’t sentient like others in the universe, merely crash test dummies for kid friendly destruction. A fun concession to get the mode into an obviously kid friendly game. Still, there is no denying, when you launch a land mine blowing up a truck and the extra pointed golden car, the explosion it creates is purely satisfying.

Adding flavour to all these encounters, the cars have personalities that shine on the track. This is important too, as what would a Pixar property be without strong character work? The cars are certainly not afraid to talk about what is going on in the race. They will comment when you overtake, lose places or bump into an opponent. Johnson explains that getting those personalities is key to the game. “You still have to let players express themselves and how they play. You have this idea of the player and what they want to do, but also have to preserve the cars’ personalities and them as characters. We’ve added in these mechanics around the idea that they are characters, that they can do things normal cars can’t do. We made that integral to the gameplay aspect of it. A lot of it does come from their dialogue lines and facial expressions. So if an aggressive car attacks a car, they are going to comment on it and be happy about it that they knocked someone out of the race. If a more passive cars hits someone, you’ll actually hear them apologise.” This is all wrapped up by a commentator who adds just a touch of spice to proceedings, even breaking down your performance at the end of a race. A simple, but nice touch.

One of the more unique additions to the game is a new play area mode called Thomasville, based on the in-movie location. It’s here where Avalanche Studio’s feel like it is hearkening back to Disney Infinity. Much like the Playbox in that title, this is about openness and your own imagination. While you can’t create your own levels a la Disney Infinity, it’s a mode not hindered by objectives. There are little mini-missions you can complete, but it is all about driving around and finding your own fun. It’s an excellent idea for younger children who might struggle with the game’s more difficult racing moments. “Driving a car is fun” asserts Johnson. “Going fast, having a good time on these tracks. It’s fun by itself. We found that there were some players who didn’t always want to have a competition, where they had to go against other players or AI, but rather just the thrill of driving around, crashing into things, shoot themselves with rockets and what not. We got that feedback, and we took it to heart that some people just want to play, so we included the Thomasville play area where you can.”

Getting down to it, Cars 3: Driven to Win thus far moderately impresses. To say it is turning out better than you thought it would is unfair, as these games have been decent in the past. Still, there is no denying, this could have been a pretty cynical licensed cash grab to capitalise on the movie coming out. However, from what I’ve seen, it does look like a game with a heart to it, garnered by care. It has a fair bit of content in it too, which is sure to keep families and fans of the franchise happy. It can be challenging, and moment to moment, it does feel much less fluid than the obvious competitor Mario Kart 8. However, what Cars 3 is shaping up to be is a fun kart racer with a fair amount of content to keep little tuckers busy.

At the end of the day, that’s probably above and beyond what the game needs to be.