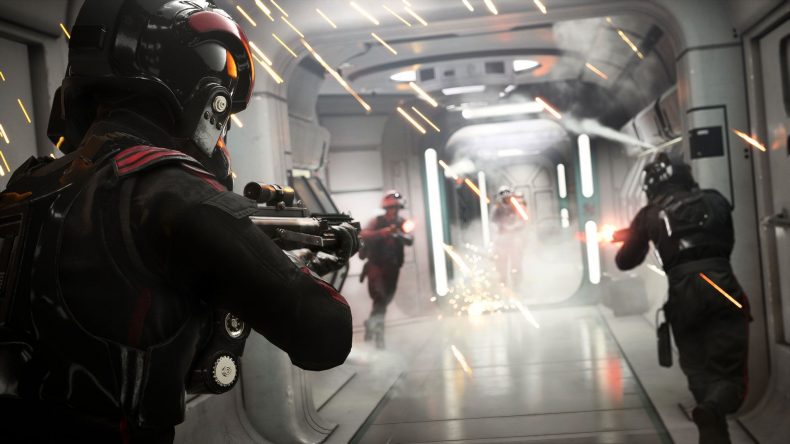 I recently had the opportunity to go to DICE HQ in Stockholm to play a preview build of the upcoming Battlefront 2 Beta. The event mainly consisted of playing a few of the multiplayer modes that will be available when the game launches in November. During the course of the morning there, I got to spend a little bit of time with Paul Keslin, one of the Multiplayer Producers on Star Wars Batttlefront 2. We talked about some of the changes that have been made to the space battles in Starfighter Assault as well as the introduction of new class-based loadouts in the other modes. We also discussed a little bit the process that the team goes through to create the maps that we will play on and how that fits in with the wider Star Wars universe.

First off, I wanted to talk to Paul about the significant changes that have been made to space battles which now feature a more complicated control scheme as well as a more storied approach to the action. In particular I was keen to understand what had driven the team to make these changes?

“A lot of the feedback we received from players after playing Fighter Squadron in Battlefront was that they wanted a more tactical assault mode. Having those big space battles was a key component of many people’s wish for a Star Wars game, so we wanted to revisit it and create a more storied approach. We have tweaked the controls to give players a little more choice, but there are plenty of accessibility options still there to streamline them for those players that aren’t perhaps as skilled in aerial combat. In Starfighter Assault, we are trying to create a narrative thread through the match with various objectives that need to be achieved as a team. We did some of this with the Death Star and Scarif DLC from Battlefront, but that polarised the players a bit because of the change between flight and then on the ground. Some players didn’t like that the mode switched it up in this way, but they still liked the story element tied to the objectives, so we have the staged based stories, but now you stay in your ship the whole time.”

Moving on I wanted to discuss the addition of classes for the modes on the ground, where these changes came from and what the team hopes this will do for the multiplayer as a whole.

“First off we wanted to give a lot more choice for players. By adding in the classes we have given players the option to switch up their play style much easier and a lot more tactically on the battlefield. By having four classes that range from support, the heavy to long range we are trying to push for much more teamwork on the battlefield. Take me for example, I like to play support in most of the games that I play now, and my favourite is the Officer class as it provides a rally support to nearby team mates improving their damage reduction.”

I told Paul at this point that I’d tried all four classes and that at the moment I seemed to get on best with the Heavy class because that seemed to be more of a supportive role too, albeit more of a vanguard than the Officer.

“Right! By having these classes we hope that players will find one that they prefer, but also try out the others as and when the team needs them.” I asked Paul if these changes were as a result of direct feedback from the player-base from the first game.

“The changes have come from a variety of places really, we have had a tonne of feedback from players from the previous game, but also it was a direction that we as a team wanted to go as well. We are keen to encourage more teamwork between players and we feel that the classes will help achieve this.”

The map that I played on at the event was based on Naboo, with various locations on the planet being the setting for each mode. One of the things that struck me playing is that the worlds automatically feel familiar even though I’ve never, of course, been to any of them. I asked Paul how the team goes about designing a location and map.

“Ha! Yes, all the worlds in Star Wars do feel familiar and we work very closely of course with Lucasfilm. They give us great access to concept art and we do a lot of back and forth with the team there to create something that feels authentic. We talk a lot about the idea of “just left of camera” where the work that goes into the films, we see the characters fighting in the palace in Naboo for example, but what is happening just to the left of that? What is happening while the main characters are fighting through enemies, and that is what we try to do with our map design. We always say, and Lucasfilm doesn’t like this term, but we always say that we aren’t trying to create canon for the Star Wars universe. What happens in our games isn’t gospel, but we do try to create a realistic and above all recognisable style that fans of Star Wars can immediately connect to.

Take Kashykk for example, one of the maps that we have announced will be in Battlefront 2. In the movies you barely get to see anything of Kashykk, so what we have tried to do is create a world based on the little scene we have seen and expand on that.”

I was running out of time, so for my last question I asked Paul about future content. One of my main criticisms of Star Wars Battlefront was the way in which the DLC schedule ended up splitting the player-base which resulted in pockets of people playing little micro versions of the Multiplayer on disconnected maps.

“No, we aren’t going to put new map content behind a paywall. We heard the criticism about splitting the player-base and that is something that we don’t want to do this time round, map content will be delivered to all players with extra paid for content centred around star cards and possibly new weapons.”

My time was up, so I thanked Paul for his time and sneakily asked what his favourite location was for the new game. He was a little cagey as not all locations have been announced yet, so he settled on Kashykk – “I’m looking forward to people playing on that map because a lot of work has gone into it and I’m excited for people to see it”.

Likes to shoot stuff and wear pretty shoes. Is a BEAST at Titanfall.
MORE LIKE THIS
diceEAStar Wars Battlefront 2