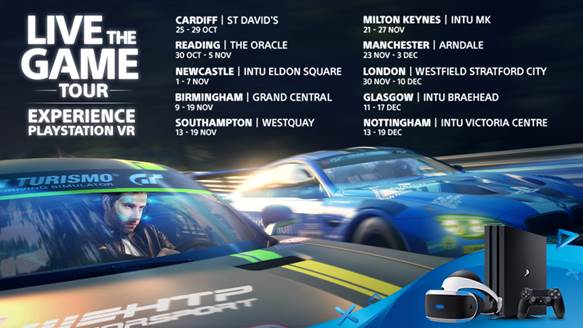 Have you tried PS VR yet? No? Been tempted? Maybe? Well, it’s coming to a place near you, so there’s a chance for you to at least try it.

Sony are taking PS VR around the country in a ‘Live the Game’ tour starting at St David’s in Cardiff between the 25th and the 29th of October and finishing in Nottingham between the 13th and 19th of December. There’s no need to book, you can just walk in and have a go, but if you want to ensure you get a try you can book through here.

At the event you’ll be able to play Superhot VR, Gran Turismo Sport, Moss and more.

Also, John Lewis in Oxford Street will be hosting PSVR with Gran Turismo Sport between the 20th of October and the 31st of January.

If you like it (or even if you want to buy it without trying it) the PS VR starter bundle which includes the VR headset camera and PlayStation VR Worlds will also include Gran Turismo Sport for £349.99 between October 18th and October 31st but only at participating retailers, which according to this is Smyths Toys Superstores.

A lover, not a fighter and an all round good guy (he would say that, he wrote this after all), he's happy to be here as part of GIAG.
MORE LIKE THIS
Gran Turismogran turismo sportmossplaystation