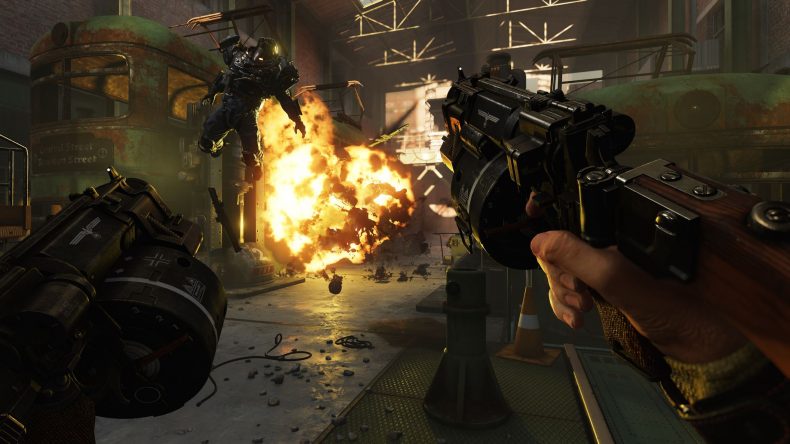 “It was a dream come true,” he says. “We have always been massive fans of id Software and Wolfenstein.” Wolfenstein: The New Order was a soft reboot to the franchise that had Wolfenstein 3D that was the first shooter many people played.

On switching from id Tech 5 to id Tech 6, there were gains across the board but also some challenges for MachineGames. DOOM ran like a dream on everything and will be hitting the Nintendo Switch in a matter of weeks. “We love id Tech 6, which has allowed for vast gains in visuals and performance across the board. It is however always very challenging to migrate to a new engine, because the whole team has to adapt to new tools and production pipelines. It has been well worth the effort and we couldn’t be happier with how the game looks, feels and sounds.” He also praised the team at id Software and they’ve worked with MachineGames on this release. “We have idolized id Software since our youth, so to get the opportunity to work with them has been an amazing honor.”

There has been a lot of buzz online about the marketing for The New Colossus through the trailers and various Tweets from the official account. The game itself tackles things like racism, nazism, and more quite well but it also isn’t afraid of going over the top when it needs to. Jens talked about his and the team’s influences on narrative and themes: “Our inspirations come from all over, but perhaps the most significant for me is Paul Verhoeven’s RoboCop from 1987 and Frank Miller’s graphic novel The Dark Knight Returns from 1986. These influenced me greatly in my formative years and to a large degree shaped my creative sensibilities. Both are examples of over the top action and satire perfectly married with character driven, personal drama.” MachineGames envisioned the new Wolfenstein games as a trilogy and had always hoped to make 3 big main games for it assuming it is successful enough. He commented on how they planned this from a story standpoint. “From the get go we decided to think of this as a trilogy, mostly to put some kind of boundary on the project, so it wouldn’t feel too overwhelming. A great side effect of this was that we were able to seed ideas in the first game that we could cash in with this game. There is a meta arc covering a trilogy and plot lines that weave across titles. Fingers crossed New Colossus does well enough to warrant a third game.”

Given how much I love the soundtrack for Wolfenstein: The New Order and Meshuggah’s music, I asked Jens about both the addition of Martin Stig Anderson (LIMBO, INSIDE) to the composition and Fredrik Thordendal’s influence. I also asked if the soundtrack would be reactive like DOOM. “It’s a bit of both. There are a lot of narrative beats that require custom scoring, but during combat the soundtrack will respond to player behavior. Mick and Martin have done an amazing job with the game. I’m in awe of those guys. One of the major themes in the game is a kind of spiritual remix by Martin of a track Fredrik made.” It is always interesting learning how the people behind games you love spend their work day and Jens talked about how it changes during the different phases of the current project. “It depends a lot of what phase the project is in. In the early days I mainly do scriptwriting. Then comes all of the performance capture recordings, after which all of the recorded material needs to be implemented and iterated upon. During this time I do a lot of editing and camera work for our cinematics. Towards the end of the project it is all about reviewing the game over and over, identifying issues we can improve upon.”

On what newer games have inspired him in his work he mentioned two surprising names and how he prefers first person games. “In terms of inspiration, The Last of Us was a big one for me. I’m so impressed by the cohesion and execution of the narrative and gameplay in that game. I am deeply biased towards first person games, but for The Last of Us I made a rare exception. That’s how much that game spoke to me. More recent is Fallout 4, which is right at the top of my favourite games of all time.”

It isn’t a God is a Geek interview without knowing where the ketchup is for MachineGames and Jens. It looks like Jens is a Fridge man and not on Team Cupboard. “Fridge of course! I take my mysophobia very seriously.”