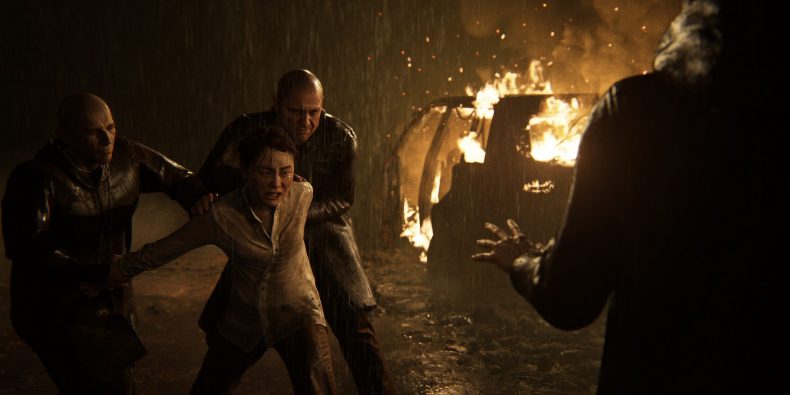 It’s been a while since E3, which for the most part was a significantly quiet affair. Microsoft unearthed the Scorpio as the X Box One X, Nintendo continued to show us just how bright, colourful and wonderful games could be, while Sony made us sit and watch a lot of trailers. It was a bit of a divergence for Sony, who normally mix up a considerable amount of in-play demos and trailers, and as a result it all felt a bit, flat. Tokyo Game Show came and went with almost nothing noteworthy to speak of, and as a result eyes were on Sony for their Paris Games Week conference to see just what they could show off with Microsoft about to release their uber-console the following week. The answer? Not a lot.

The hour long pre-show was the stand out highlight, showing off a lovely collection of bright happy titles that are shining beacons in this world of grimdark realism and over the top violence, Guacamelee 2, Spelunky 2, Locoroco, The Sims; nothing much on their own, but still a very varied collection of entertainment to come our way. Then the show started for real.

There wasn’t a lot we hadn’t already seen before, there was some interesting stuff in the shape of Erica, and Sucker Punch’s next title Ghost of Tsushima, but little in the way of detail. Then we got a look at David Cage’s android game, this time with a rather uncomfortable domestic violence angle, which, as a father, kind of got to me. But it was the show’s big finish which caught the ire of a lot of people, and for good reason. The Last of Us Part 2 was announced back in December 2016 with a walk through a corpse strewn house finishing with us happening across Ellie calmly playing a guitar, a look of fire in her eyes as it faded to black, now a year later Sony treated us to a little more of it, and maybe it was a little too much. The broadcast for pre-Sony’s show began at 3pm UK time and the event kicked off at 4pm with the trailer in question being shown around half an hour later. During the five minute run time we were ‘treated’ to the sight of a woman being strung up by her neck, another woman getting her arm smashed in by a claw hammer, a guy getting an arrow through his eye, another guy getting his head skewered by the claw on the hammer, and finally a woman getting that same claw hammer treatment to her bonce. It was all a little much to take and not really something that whets one’s appetite. The deaths of the men are quick and removed from camera quickly, while all the violence perpetuated against the women gets considerably more camera time, the last of which stares dead eyed at the camera before she’s released and drops lifeless to the floor.

The Last of Us is a violent game, we know this. The original was brought to our attention a long time ago with a gameplay segment where Joel took a group of guys out in brutal fashion before blowing a guy begging for his life away with a shotgun. So, there’s a certain amount we should expect to see, but was this really the time and the place for something so incredibly brutal to be shown to the masses? The middle of the afternoon? With nary a content warning for anybody young or of a sensitive disposition. It’s possible that the violent nature of the trailer could resonate well with fans of the first game (of which I am one, it’s one of the finest games I’ve ever played), however, just because the original game was brought to our attention by way of its violence, for the fans, the love of the game isn’t contained in its violence. The Last of Us is a wonderful character piece, not just with how the two leads – Joel and Ellie – interact with each other, but how they do it with all they meet along the way. You come to care about everyone they pair up with. Who could forget about Bill, the trap setting loner? Or Joel’s brother Tommy and the people he leads inside the damn in Wyoming? Then there’s Henry and Sam, and how that meeting winds up so terribly heartbreaking. Every partnership made along the way is short-lived, but incredibly meaningful and memorable.

As well as that there’s the stunning locations the game takes you to as well. Granted, many of them are connected by conveniently placed ladders and dumpsters, but outside of those, the portrayal of a ruined America being reclaimed by nature, trees growing through buildings, formerly caged animals cavorting freely through what were once bustling hives of population; the times when you could stop and admire without being pestered by marauders, clickers or bloaters, those quieter moments were so much better than all of the numerous headshots, snapped necks, shiv and nail bomb kills put together.

By making our second glimpse of The Last of Us Part 2 so stark with its violence misses the point of what made the original game so popular. It’s a sequel that a lot of people wanted, but just as many believe isn’t necessary, just like the violence we witnessed in that five minute snippet. That first trailer, as Ellie plucked away at the guitar was so much better, echoing the original’s wonderful soundtrack from Gustavo Santaolalla, that was what had people anticipating this sequel. For me though, this was horrible, completely unnecessary and poorly timed.

Features, Opinion
the last of us part 2

A lover, not a fighter and an all round good guy (he would say that, he wrote this after all), he's happy to be here as part of GIAG.
MORE LIKE THIS
the last of us part 2

The Last of Us Part II delayed until May 2020