The next 30 Totem Stickers, and how they help you beat Necrozma 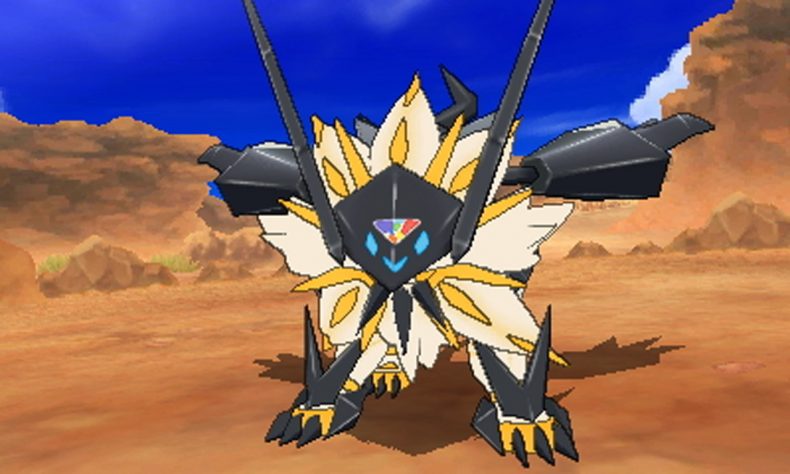 Ok, we’ve got fifty Totem stickers now, but, we want more. Here I’ll give you the locations of the next thirty stickers, tell you what they get you, and why they’ll help you take out Necrozma.
After your dalliance with the Ultra beast in the Aether Foundation you’ll be back on your island journey, and you’ll soon be on to Route 14 going towards your next island challenge. So, without further ado, here’s sticker 51

51) You’ll see a hiker near some rubble, the sticker is on the rubble
52) As you approach the ruined megamart you’ll see three Murkrow standing around a sticker, you can pick it up, they won’t hurt you.

53) Opposite the beach there’s a surf shack, on the right hand side of the entrance is where you’ll find sticker 53.
54) When you get to the Pokémon centre go right and you’ll find one of the Aether Foundation science blocks, you’ll find the sticker on the side. As a bonus climb underneath and do battle with a pre-schooler, they’ll give you TM81 X-Scissor for winning.

55) In the northwestern area there’s a pool of water with a sticker floating in it, stand on the walkway below it and press A to fish it out. 58) On the side of the Pokémon centre
59) Go through the nearby hedge hole and there’s a sticker on the side of the house there.
60) Inside the Pokémon centre look to the left of the counter, there’s a box with a sticker on it.
61) Outside the Team Skull headquarters head all the way to the right and you’ll find a sticker next to the tree.
62, 63, 64) You’ll notice there’s a sticker to the left of the entrance, but you can’t get it without going into Team Skull’s lair. Go inside and head immediately left and through the door. From there walk round to the front of the house, smash the rock using Tauros charge and three totem stickers are yours!
65) Go back inside the headquarters and go through the doors to the left hand side of the stairs, take care of the team Skull member making themselves a nuisance to you and go out the other side, there’s a sticker on the front of a box next to the vases.
66) You’ll be upstairs, and need to go out onto the balcony, head left and grab the sticker that’s on the broken door you find.

67) The first house on the right has a sticker to the left of the entrance
68) After grabbing number 64 go inside the same house and on the right hand wall is number 65
69) The second boat on the left hand side has some crates to the left of the door, there’s a sticker on those crates.
70) Go inside that boat and on some crates next to the stairs there’s yet another sticker
So, for 70 stickers you will get yourself a Totem Togedemaru from Professor Oak at Heahea Beach, but what we’re interested in is what you get for 80 stickers. You’ll probably have noticed a trend in the Totem Pokémon you’re getting, they’re in the same order as what you’ve fought in the trials, so you might be able to guess the Pokémon we’re aiming for here.
71) On the third pier on the left hand side of the village there’s a cafeteria, go inside and on the near side of the area you find yourself there’s a set of crates, on the left hand side of them is sticker 68.
72) On the third pier on the right there’s a big boat shaped like a Steelix, inside you’ll find a basket, on the right hand side of that basket is another sticker.
73) On the fourth pier on the right there are yet more crates, and these also have a sticker on them.

74) Follow the route as it goes and you’ll come to some ruins, there’s a sticker behind a rock near the entrance to the next area. 75) The minute you enter the are you’ll notice a glint almost directly above you, the minute you step forward though there’s a cutscene, once it’s finished head around the wall to grab the sticker.
76) While watching the cutscene you probably may have noticed a well and a sticker stuck to it, go over to the well and grab that sticker.
77) Go inside the house that you find in the ruins and head left, there’s a sticker on the back wall.
78) Head through the door near where you grabbed sticker 74 and you’ll find yourself in some sort of storage area, go to the right and up a bit and you’ll find a sticker on a barrel.
79) Head immediately down from the barrel and through the door you find, go right and through the next door to a bedroom, on the right hand wall there are two separate beds and a sticker in-between them.
80) Instead of going straight to the Ancient Poni cave head north and battle the Pokémon collector, afterwards head around and all the way to the right behind him to find another sticker.
And that’s 80, and for that you’ll get yourself a Totem Mimikyu, this is your trump card for beating Necrozma. It’ll be under levelled, so you might want to train it up a little bit though.

Necrozma uses a lot of powerful attacks, so much in fact that even with Pokémon levels approaching 60 or higher he’ll still one shot your team, unless they have the Sturdy ability, or a focus sash. Or, Mimikyu, because Mimikyu has a disguise which takes the brunt of the first hit. By now you should also have the TM for Toxic, teach this to Mimikyu and use it on the first turn. Once you’ve infected Necrozma just keep reviving and healing your party and Necrozma will fall (expensively).

So, that’s Necrozma down, but there’s still more to do. Have fun out there trainers!

A lover, not a fighter and an all round good guy (he would say that, he wrote this after all), he's happy to be here as part of GIAG.
MORE LIKE THIS
Guides