previous
Eight games coming to Xbox Game Pass in March
random
next
Yakuza 6: The Song of Life -Prologue Demo- is now available on PSN so get that selfie camera ready
0 comments 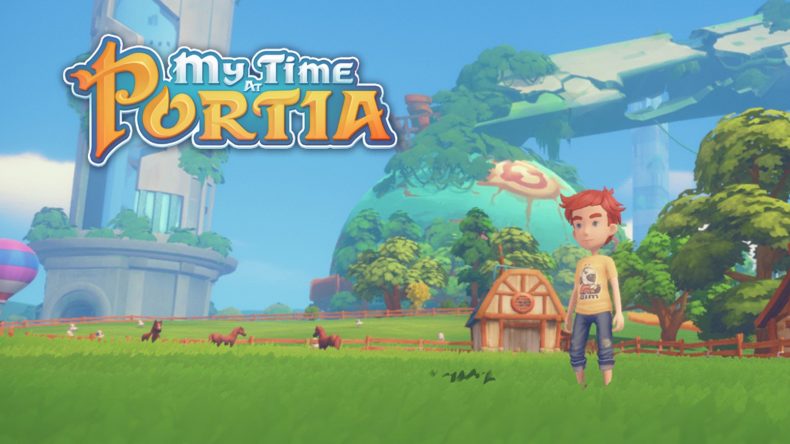 People have rediscovered the joys of creative games lately, obviously starting with Minecraft. But games like LEGO Worlds, Portal Knights and particularly Stardew Valley (among others) have embraced a more fun, relaxed experience. Even No Man’s Sky has added a creative mode, which frankly makes that game incredible. It’s nice to see games with a broader appeal, with minimal focus on action and violence, which is where My Time At Portia slots in nicely.

You’ll arrive at Portia via boat, taking in the beautiful, idyllic island scenery as you disembark. Greeted by one of the town’s leaders, you’re given a brief bit of exposition; you’re basically here to take up your father’s mantle and open up a workshop, becoming a handyman for the townsfolk and beyond. It’s an absolutely beautiful game to look upon, thanks to some gorgeous art direction and a wonderful use of colour. It isn’t quite cel shaded, instead opting for that vibrant style that Breath of the Wild and Hob used. Wandering around the wilderness, you’ll see massive ruins in the distance, with grass and rivers surrounding the town itself. The lighting is breathtaking, as the sun goes down and shadows stretch out, even through the grass and behind the trees; it’s everything you’d want for a chilled out game like My Time At Portia.

Once you’ve taken in the sights you’ll want to earn your Builder’s licence, creating things like a basic axe for chopping down smaller trees and a basic axe for mining stone and a few other things like copper. It will take a little bit longer before you can make more advanced tools for the bigger trees and rocks, but it’s really up to you when you get to that point. There is a basic story to follow if you want, which will expand your exploration options, but you’ll also find plenty of things to do in the starting area. Crafting is essential for whatever you choose to do, however. Luckily, you have your father’s old building manual, which contains blueprints for various different creations, from bridges to machinery for joinery and smelting. This is where things get a little complicated, as finding the materials isn’t always easy; in fact, there was one machine I needed to create copper blades…which needed copper blades to create the bloody thing. Yeah, that was confusing. There are shops around the town at least, if you can earn yourself enough money to buy supplies. Building itself is very complicated, especially when you need to create several parts using a variety of machines. You have saws and furnaces, as well as more general workbenches, all requiring time to actually finish their respective creations. Unlike Minecraft’s furnaces however, My Time At Portia’s crafting takes a long time; the first time I tried creating bricks, I was taken aback when I was informed that I would have to wait about eight in-game hours before they would be ready. It’s not real-time, but it’s still a decent wait and early on you’ve got nothing else to do so the wait can be tedious. It’s not as bad later on, as you’re able to use several machines at once, then go off to gather more resources while you wait. But beware, you only have so much stamina before you’ll have to go to bed.

The town offers various stores, which you can visit for supplies and to sell goodies you’ve found out in the wilderness. There is even an abandoned ruin in there, but you’ll have to pay for a licence to go in there; it’s the only way to find certain materials though, including power crystals to keep your machinery running. There are even mysterious discs buried in there, which you can take to the research centre for special upgrades. Outside the town, ruins are more dangerous and you’ll have to fight off creatures as you mine. Unfortunately, combat is very awkward, feeling like the developer wasn’t quite sure whether to make it like an MMO or go for a more traditional, action-RPG fighting system. The result is clunky and simply not fun, even if it’s not the main focus of the game. You might be required to wade into battle at times though, as some creatures drop resources required to complete a quest.

Quests come largely in the form of Commissions, found in the town hall. A few can be discovered simply by talking to people, usually denoted by the ever-popular exclamation mark floating over their heads. Some simply need wooden planks or copper plates, but others will need specific machinery to complete; annoyingly, you probably won’t know this and the first commission I accepted turned out to be timed, leading me to eventually discard it because it would’ve taken too long to find what I needed, then build machinery and craft the materials I needed.

This is My Time At Portia’s main issue, really: it just doesn’t tell you how to do anything properly. Your handbook only gives limited information on where to find materials and I eventually lost interest as a result, because everything felt far too long-winded or just overly complicated. Some people will love that, plus it does encourage exploration and discovering things for yourself, but many others (like myself) just won’t have the time or patience to bother.

Given that My Time At Portia is in early access right now, there is plenty of time for Pathea Games to refine its mechanics and hopefully streamline some of the creation aspects. The game itself doesn’t seem to need much in the way of polish though, as it looks and runs well, with no bugs at all seen in my time playing. Of course, making changes could affect that, but with a publisher like Team17 behind it, you’re probably safe expecting a quality product at the end of the development period. It’s unlikely to ever trouble Minecraft or Stardew Valley, but there’s a lot of potential here and it’s well worth keeping an eye on this one.

Features, Previews
My Time At Portia