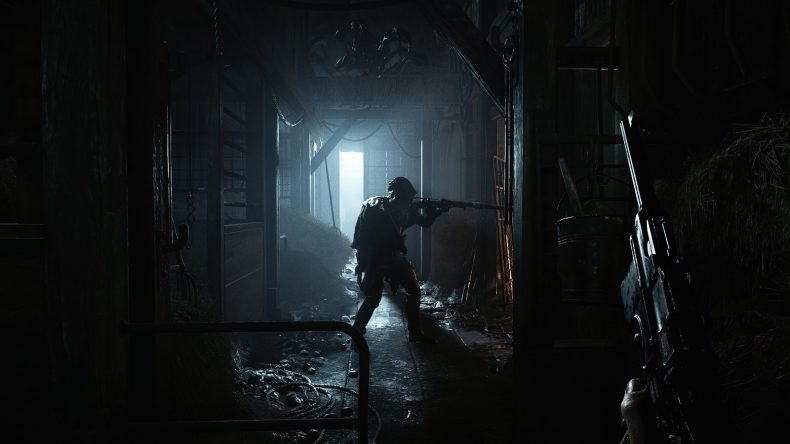 Hunt: Showdown might be another addition to the battle royale genre (sort of), one of many since PUBG exploded onto the scene last year, but that doesn’t really tell the whole story. Sure, you’ll enter the arena with a number of other players, either in teams of two or in solo matches, but the goal here isn’t to be the last man standing. You see, the title of this game is quite literal; your goal is to hunt a specific boss creature (or more, depending on the objectives of the contract you select), but so is everyone else on the map, which leads to the inevitable showdown portion of the game. Like those old Ronseal adverts, Hunt: Showdown does exactly what it says on the tin. Albeit a metaphorical tin.

Developed by Crytek, meaning first and foremost it’s a bit of a graphical showcase, Hunt: Showdown is set in the Old West, albeit a version of the period in which zombies and other plague-ridden monsters roam the land. Indeed, this means that you’ll have to avoid being murdered by those as well as your fellow players, which already adds an extra dimension to the gameplay before we’ve even delved into the tracking and banishing of the boss monsters. At the beginning of each game, you’ll choose a contract that will take place either in the day or the black of night, and you’ll be tracking down either a giant spider or a rather large butcher with a pig’s head, or perhaps both if you’re particularly adventurous…or masochistic. When the match begins proper, you’ll use your Dark Sight to search for clues of the boss location, which will grey out areas of the map once found, eventually pointing directly to the right place. You’re meant to find, kill and banish the monster there, before attempting to escape the map and keep all the bounty you’ve earned; die in the process and your XP will be halved, plus you’ll gain no monetary rewards. In a game where you need money to recruit your player characters, this seems unnecessarily harsh. This is not a friendly world, however, so perhaps the harshness of it all simply ties into the game’s aesthetic. On that front, Crytek does not disappoint. It’s true that when I initially played Hunt: Showdown in its closed alpha, the graphical options were limited to resolution changes and that’s about it. This was compounded by the poor performance due to a lack of decent optimisation. By the end of the alpha, in the space of just a couple of weeks, I had to hand it to Crytek for not only adding in a plethora of graphics options, but also for optimising the game so well that I could stay at 1080p with high settings and get a buttery smooth 60fps at all times. Now that the game has moved into Early Access, it has kept most of the optimisation quality that it had at the end of the preview period. Its loading times are still…well, they’re atrocious, actually, but as it does load a whole map (which is quite substantial) and has no in-game loading to speak of, I can’t complain too much on that score.

As I said earlier, there is no doubting that this is another Crytek graphical showcase. The developer has been known for creating some gorgeous games in its time, from the original Far Cry on PC, to the ol’ benchmark title Crysis, its people certainly know how to get the most out of your expensive graphics card. Despite the world being one of disease and death, it’s surprisingly pretty. During the day, the lighting effects and shadows result in some breathtaking effects, as individual trees cast their own swaying shadows on the ground and the way the world is realistically reflected in water is quite marvelous, without anything looking pixelated. When participating in a night hunt, things get incredibly atmospheric and the spook factor really comes into play; I’ll touch upon the sound in a moment, but when that combines with the almost claustrophobic darkness that enshrouds the map, it turns it into quite the survival horror experience. When I accidentally stumbled across the Butcher in my first night hunt, I absolutely did not want to enter his home; the darkness inside was bad enough, but when he starts chasing you and screaming in that horrid way, you will panic if you’re playing solo. It’s great. Sound plays a pivotal role in Hunt: Showdown, with the Butcher’s screaming and snorting being just a fraction of what’s on offer. As you creep around the varied zones of the game’s map, from the swamps to the graveyard, you absolutely need to keep your noise to a minimum; this isn’t helped by the crows that scatter as you pass, or the dying animals that scream when you approach, alerting any nearby nasties to your location. The creatures make their own brand of grunts, groans and growls too, so you know when an Armoured is close by (they’re similar to Left 4 Dead 2’s Chargers) and let me tell you, if you’re already running away from something else and one of those hears you, you’re going to have a bad time. If you’re forced to shoot them, the booms of gunfire travel long distances, which alerts more than just the AI monsters; other players will know you’re about, but obviously that works both ways.

Players are probably the biggest threat in Hunt: Showdown, aside from the boss monsters, but part of that is down to them being able to skirt the rules of the game. As it stands, once a boss monster is killed and the banishing ritual has begun, everyone else on the map can see that location using Dark Sight. Same goes for the pick-up point when a player is trying to escape. This is great, as it adds an extra layer of tension after a boss fight (which could already have been heard, as they’re a bit of a slog if you’re alone) but what isn’t great is the unsporting nature of those who simply don’t attempt to fulfill their contract; they’re only in it to hunt fellow players, which is doubly frustrating when you’ve spent ages finding all the clues, only to be picked off by someone who has no interest in playing the game as intended. To be quite honest, I’m not sure that can be fixed as you can’t change human nature with a few lines of code. I’m sure Crytek can some up with something to help deter those players, at least. I’ve only recently started to get over my anxieties regarding online multiplayer games, but I’ve covered quite a few now and I’m playing them more and more outside of reviews and previews. I’ve started to grow quite fond of this new brand of survival shooter, but Hunt: Showdown needs work to keep me coming back. I love the tension and the almost survival horror nature of the game at times, but there are often too many AI creatures around, making it even harder to fight against any human opponents when you’ve only just scraped through a Hive encounter. I don’t mind the one-and-done nature of these games, but when you’re killed (sometimes in an unsportsmanlike manner) and lose all your money; being forced to spend in-game cash to buy your way into another match feels like a kick in the teeth. You’re already punished by the reduced XP, there’s no need to punish players further.

There’s no doubt in my mind that Hunt: Showdown shows real potential. In a world where everyone and their dog is joining the battle royale genre, it’s nice to see a game that tries something different in the PvP arena. It may not be truly successful right now, but as it’s only just entered Early Access, there is plenty of time to shorten those loading times and iron out the kinks. Keep your eye on this one, folks.