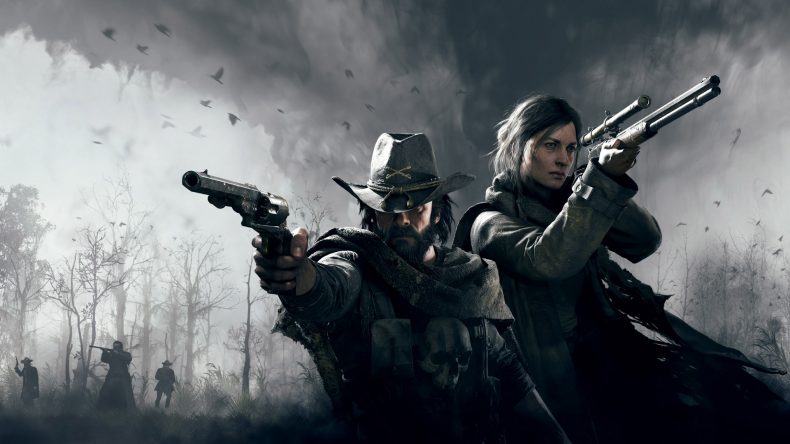 Hunt: Showdown is now fully out on consoles after being in Early Access on Xbox One for the past year. It is a brilliant blend of survival horror with Battle Royale mechanics, but it can still feel a little overwhelming at the start. Below you will find some quick Hunt: Showdown tips to help you get to grips with things. They’ll cover areas such as the intricacies of the combat and strategic possibilities that the environment presents to you. A large part of your early game will still be spent quivering in fear in a bush, but at least you can start a little more comfortably.

There are two different types of play style you can choose in Hunt: Showdown, and it is advised to try both to see which you prefer. You have a choice between Hunter or Gunslinger. The Gunslinger mode is more akin to FPS controls that you may be used to. There will be a permanent crosshair for your weapon and you can fire from the hip immediately. Pressing and holding the left trigger will aim down sight and the right trigger will fire the weapon. The melee function while holding your primary or secondary weapon will default to clicking in the right stick.

In Hunter mode, you have a little more flexibility, but considerably more fiddly controls. To be able to fire from the hip you will need to press and hold the left trigger. If you want to aim down sights you will then need to click in the right stick. The melee control will also be linked to the right trigger, rather than your right stick, which does take some getting used to. There are a lot of weapons to unlock in Hunt: Showdown, but not all of them fire projectiles. You can equip a number of melee weapons, but you can also equip a knife or knuckle dusters in one of your equipment slots. The knife is pretty powerful as it allows you to take out the grunt enemies fairly quickly, but more importantly virtually in silence. Also, you can slow enemies down significantly by swiping at their legs – armoured enemies are particularly vulnerable to this. For immolators, you’re better off using blunt melee damage, as piercing damage will aggro them. And the last thing you want is one exploding and rushing at you.

3. Watch out for environmental alarms

As you wander around the two maps in Hunt: Showdown you will come across a number of creatures that will provide alarms or decoy opportunities for you. Crows, for example, will startle and fly up in the direction you are travelling so be careful as you are likely to give away your location and direction of travel. Also, around large buildings, you will find cages. The red cages are the ones that will have dogs or chickens in them, that will make a noise when you are nearby. You can take them out fairly swiftly by shooting the lamps that are hanging above them. 4. When to use stealth

There are lots of sound traps around the maps of Hunt: Showdown. If you want to be quiet it is worth avoiding these as much as possible, but equally, you don’t want to move too slowly when you are out in the open. After all, a crouching, slow-moving target is an easy target.

When you are near a compound where you believe other players are, then you can choose when and how to use stealth. While crouched, opening doors will be quieter and you will make less noise over broken glass or whilst walking over tin roofs.

Clues are dotted around the maps and gathering three of one type will allow you to pinpoint the location of the boss. If a clue is still sealed, i.e. another hunter has yet to find it, it will look like cracked ice. Clues that look like a black portal to hell, tell you another Hunter has already gathered it and is one step ahead of you. Glowing red clues that make a noise mean another hunter is in very close proximity to you. But, be aware that it will only glow red if you still have to gather the clue, if you have already taken it you will not get the red warning. Each hunter comes equipped with the same health pool which is divided up into health chunks. Fire damage is continuous until you put it out, and any health chunks taken by fire cannot be repaired with any health item. The same happens with a downed hunter. If you want to prevent a revive of that hunter you are best off burning the body if you can. Remember though, if you burn it before looting it you won’t be able to take anything off it once it has burned out.

These are just six quick Hunt: Showdown tips to get you started. You will soon find that Hunt: Showdown presents a layered experience with tonnes of potential for different types of strategy. The best advice is just to get started and make some mistakes. For the first eleven levels of your overall or “Bloodline” level you won’t use lose your hunter if they die in a match, giving you plenty of opportunities to practice and get familiar with the mechanics. After level eleven though, if you die in match your hunter regardless of their level will remain permanently dead and any weapons and equipment they had on them will be lost. Please feel free to share your Hunt: Showdown tips in the comments.

Likes to shoot stuff and wear pretty shoes. Is a BEAST at Titanfall.
MORE LIKE THIS
CrytekEarly AccessGuideHunt Showdown