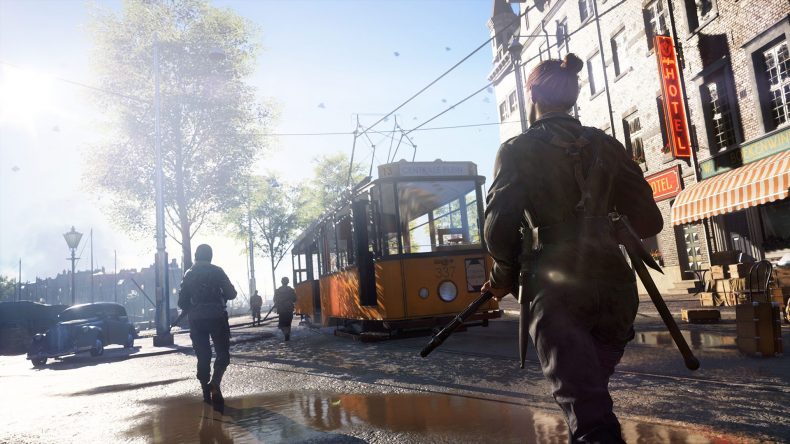 Battlefield is in an interesting position at the moment. For a long time the squad based shooter has been the preferred militaristic shooter for players who prefer a larger, more grand playground in which to shoot other players. The combination of destructible environments, vehicles and squad play has carved out its own niche audience to become one of the biggest FPS franchises.

Rightly or wrongly, my perception has always been that Battlefield has tailed behind Call of Duty in terms of wider cultural prominence. The latter’s audience attracting players who enjoy a quick time to kill on small maps with predetermined routes of play. For all intents and purposes, I’ve always assumed that Battlefield attracted a more mature audience, that’s mature in terms of age rather than outlook, due to the slower pace of play and the ability to be a useful member of the team through the different play styles afforded through the class system of Medic, Support, Assault and Recon. With CoD’s influence appearing to be on the wane, no doubt in part due to the huge success of the Battle Royale behemoth that is Fortnite, I was interested to see which direction the Battlefield series of games were likely to take.

Over the past few days I have spent a bit of time with the Battlefield V beta, both in the early access and in the now open beta. Battlefield is definitely in an interesting place, it feels more like a game that is comfortable with its own place in the FPS space and less like a game that is chasing the crowd. That view may change once I get to play the new Firestorm mode, Battlefield’s take on the Battle Royale genre, but for now the beta has shown that DICE is not afraid to go back to basics. By far the biggest change, in my opinion, is the introduction of the Attrition system. This means that supplies are limited. Players spawn with only two ammo clips and one health pack. The only way to re-supply is via a direct interaction with another player in the Support or Medic roles. Dotted about the maps are also re-supply stations located within the capture points that you can access to stock up, but for the most part you will be playing with limited resources. This has slowed the pace of play down, considerably. Now you must be careful about how you approach an objective or a group of enemies. Go in brazenly, bullets spraying, and you may find you run out of ammo and an early death. If you were to survive this encounter, but you took some damage, you will also find that your health does not regenerate fully. If you haven’t used it already you can recover some of it via your med pack, but to recover back to 100% will require the intervention of one of the Medics.

There are positives and negatives to this new mode. Personally, I think it impacts the play positively as it requires players to come out of their camped position to re-supply, however, it relies heavily on people playing their class role. I’ve been on teams with a Medic who has never thrown me a health pack and I’ve been denied a revive by a Medic who is standing right next to me. The story is similar for the support class. I don’t know why it is that players who choose these support roles don’t perform their function, but they are going to have to as the community develops. A successful squad will be one where each member actively performs their function for the good of the team. Speaking of functions, the classes have received a bit of an overhaul as well. Playing as Support you will be expected to keep your team mates re-supplied, however, new to Battlefield V is the ability to build and reinforce fortifications. Any player can do this, but Support more so. You can fortify what is left of a destroyed building, providing a defensive position, or a blockade to pull back to a safer position. All classes can revive members of their squad, but only the Medic can do so across different squads. The Medic also has the advantage of being able to revive quicker and is the only class capable of ensuring a player regains their full health. Assault is still the explosive expert with anti-tank mines, Panzerfaust, and dynamite. Gone though is the endless grenade spamming that could occur in Battlefield 1, thanks to the attrition system. Recon can still spot enemy players, but even that function has been dialled back somewhat. Furthermore, players can no longer spot an enemy player in the distance, rather they can mark a general location.

I’ve played on two maps in the beta. Rotterdam is gorgeous with a sense of a real space. There are lots of avenues for different types of play across the four classes, as well as wide routes for the vehicles to get around. Some criticism could be levied that it feels very much like the Battlefield 1 map Amiens, but lets face it both Amien and Rotterdam are real life European cities so they are bound to feel familiar. The other map is Narvik, a sprawling coastal map, sheltered by huge mountains. Narvik, too, is a stunning map, but it is much more open and requires a different style of play. I haven’t as yet been able to play any of the air vehicles so I have no thoughts on those, however, my understanding from people who have is that at the moment they feel a little underwhelming. Elsewhere there are some changes made to weapon unlocks. You will still require the in game currency to unlock different weapons, attachments and skins. You can also specify upgrades by choosing a route on an upgrade tree. Upgrades consist of things like less vertical recoil, or faster re-loading, but beware, once you have chosen a route on the upgrade tree you are locked in. If you want to make changes you will have to create an entirely new loadout. Personally I find this restriction a little unwieldy, and I can’t quite understand why DICE has designed it this way.

I’m sure there will be much more to Battlefield V multiplayer when the game finally releases, not least the new Firestorm mode which I personally can’t wait to try. The Beta seems interesting, and the changes which seem subtle at first glance will have a huge impact on how matches play out. Already it feels a slower game with matches much more tightly contested. Whether this changes due to community feedback, or as players become more accomplished remains to be seen, but for now Battlefield V appears to be shaping up to a very uniquely made Battlefield experience.

Likes to shoot stuff and wear pretty shoes. Is a BEAST at Titanfall.
MORE LIKE THIS
battlefield vBeta