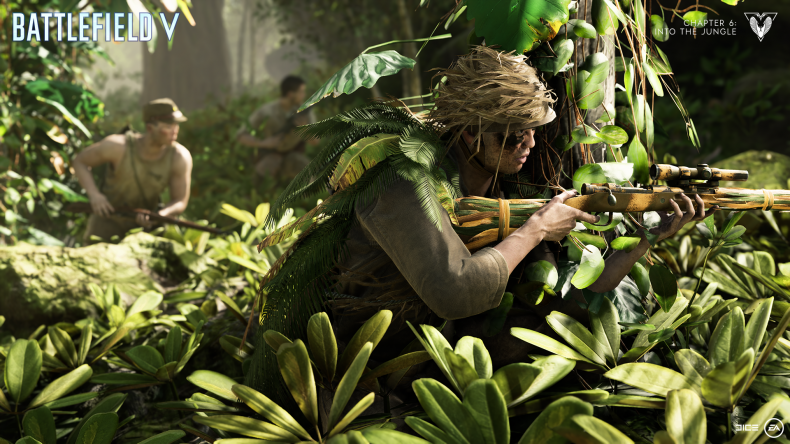 Prepare yourself for some lush plant life and bullet wounds, as Battlefield V goes “Into the Jungle” on the 6th of February. The new content update continues Battlefield’s journey into the Pacific with new locations, guns and gadgets for players to earn.

“Players can experience another side of the struggle between the American forces and the imperial Japanese Army in the dangerous jungle terrain of the Solomon Islands, which features dark mangroves, hidden bunkers, rivers and marshes. Solomon Islands is designed for intimate jungle infantry combat combined with land and sea vehicle warfare.

Three new weapons and two gadgets including the Type 11 LMG, Model 37 shotgun, M2 Carbine, M1A1 Bazooka, and devastating Lunge Mine Gadget can all be unlocked through Chapter Rewards. Three new elites including the highly skilled assault specialist Misaki Yamashiro, the fearless pilot Steve Fisher, and accomplished Zero pilot Akira Sakamoto will also be introduced in Chapter 6, with Misaki being unlocked in a unique way as a Chapter Reward.”

I really love more exotic locals in my shooters, and Into the Jungle sounds like the perfect update to jump back into Battlefield V.