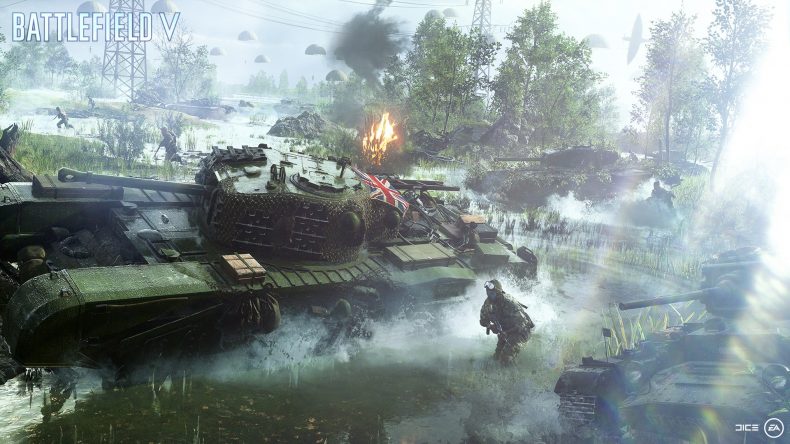 Battlefield V seems to have changes to please everyone. For the harcore competitive players random recoil patters have been removed in favor of set recoil for all weapons, like the kind of thing you see in CS:GO. Then for those who like to play with friends squad play is now almost essential, and for those who want a return to great single player shooter campaigns the new War Stories on offer are arguably some of the best single player content in a multiplayer focused FPS in years.

But the one big addition that almost seems to be missing an audience is the massive focus on character customisation and cosmetic items. When playing against other it’s near impossible to tell, or even notice, if an opponent has a cool cosmetic item equipped, meaning the only real time anyone will ever see how you look is if you secure the Best Squad award at the end of the match. Sure it adds an extra level of progression, and could be expanded in the future to make the cosmetics into something that aren’t just different grey coats, but at launch it certainly feels underwhelming.

“I think for Battlefield it absolutely makes sense,” says Andreas Morell, Senior Producer on BFV, when talking about the cosmetics system. “Player expression, player choice. It’s something that some people really like, other people don’t really care about it, and it doesn’t affect the balance of gameplay that we have in the game. But, if you want to express your way, build the company, make it really unique, it’s there for you to do.”

Interestingly none of the cosmetics can be purchased with real money, at least not yet. For the launch period there are no microtransactions available, but they will be turned on at a later date, allowing players to purchase in game currency with real money to then use on cosmetic items. For some this might seem like a ploy to avoid the negative press that Star Wars Battlefront 2 received last year at launch because of the questionable microtransaction systems, but the only answers DICE would provide on why microtransactions are being held back is that they want to allow players to play the “vanilla” version of the game first.

“At launch, there will be what we call the Company Coin, the in game currency you can earn,” says Morell. “That will be the favourite one to earn and spend, and buy whatever you want to buy within the game. Further down the line, we will switch on micro transactions in terms of the, I think we call it the Battlefield Coin or currency, but only for vanity. It’s all about cosmetics. So, again, it’s something you opt in. At launch, that won’t be available, so we want everyone to experience the game the way it is, vanilla. So, that is something that will be switched on at a later date, but it’s only gonna affect visual customisation.”

The customisation side of things still seems a little perplexing. Perhaps not in the fact that it exists, but in how little a difference it actually makes and how much of a big deal DICE and EA have made of it. It feels like they have learnt from their mistakes of previous titles, and kept things back at launch, but it’s hard not to wish they had fully embraced the more outlandish looks that we saw in that first reveal trailers. However, one new change that seems to be doing the opposite thing and completely flying under the radar is that of gun recoil patterns. In previous titles there has been randomness in where the kickback of your gun will take your bullets, but in BFV every gun has a predictable recoil pattern, meaning you can learn how to manage the recoil, especially on PC, and make sure that every bullet hits your target. Its a move to a system a lot closer to say CS:GO, than other recent Battlefield titles, and at the very top level could have a big impact.

“Another big part is the completely reworked gun mechanics,” says Morell. “No more random deviations on bullets, it’s very much skill based. You can learn how a weapon handles and you can master it. Whilst, before there was a random element into it, now if the gun is difficult because it’s, say, a high recoil weapon and high damage weapon, you can still master it and tweak it and tune it so that you can become good with it. And that’s something that’s very, very new for BFV.”

It’s a system that really allows you to become comfortable with the weapons you use very quickly. After just a few hours of using certain weapons you start to pick up on the recoil pattern and start to adjust to it quickly. Some weapons of course have a less extreme pattern and become easy to master, but others will require some serious adjusting mid spray. The risk here is that, say like in CS:GO, certain powerful weapons that are traditionally balanced by extreme recoil pattern, can be mastered by players and as soon as they can control where every bullet goes become the only viable choice for every player. “It’s something that you’re going to have to learn and master based on the amount of time you put into it,” says Morell. “There will obviously be guns that you stick to, but we don’t want to have, like, everyone play with the same weapon. We’ll balance the weapons. Battlefield has always been about a balanced rock, paper, scissors gameplay and we don’t want to have one particular weapon that is overpowered. If anything, we want players to feel like, ‘I lost that firefight, not because there was randomness or he got better RNG than I did, but because he was better with that gun, and I understand why he was better’ and so on. So, it should feel like it was a fair fight, the better man walked away with the win.”

Despite the risks this system can bring compared to the random option, it will undoubtedly make this a better experience for most players. Even if you’re not playing at the top level and learning the recoil patterns of every weapon, this should result in less instances of you being sure you aimed at an opponent’s head only to miss completely. It sounds small, but it is an exciting change, and one I’m amazed DICE have not shouted about more than they have.

Interview was conducted in Stockholm at the Battlefield V review event. Travel and hotels were paid for by EA.

eSports! I joined God is a Geek all the way back in September 2013 and since then have spent most of my time on Dota 2, and occasionally posting the odd review, news article or totally wrong predictions for The International. When I am not playing Dota I can probably be seen watching some kind of strange eSport or begging for more Twitter followers (@MikeStubbsy if you are interested). Aside from GiaG I am a computing student, football coach and major Apple fanboy.
MORE LIKE THIS
battlefield vdiceEA