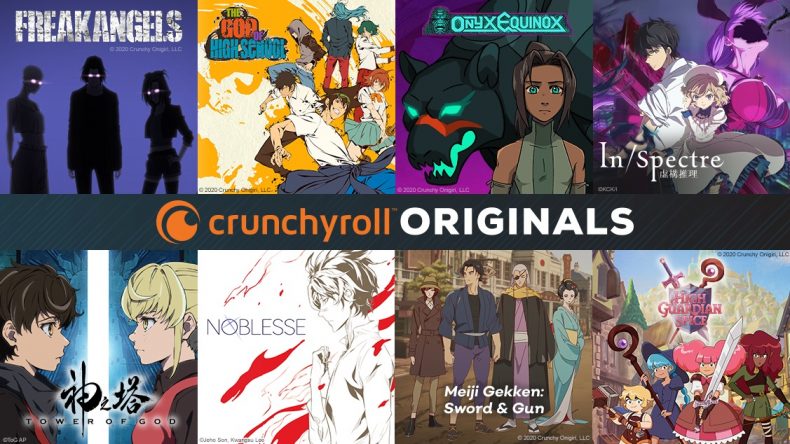 If you’re a fan of anime, and even if you aren’t, chances are you’ve heard of Crunchyroll. They’re a streaming service that specialises in anime, if you hadn’t picked up on the less than subtle hint. Crunchyroll has news that Crunchyroll Originals are heading to the service.

Each Original will cover adventure, fantasy, romance, historical fiction and more. The shows are from producers like Kodansha, animation studios such as MAPPA and from Crunchyroll Studios themselves.

An official trailer for these Original shows can be found right after the details of each show:

Airing now, In/Spectre is a supernatural romance mixed with a fantastical mystery. A duo set out with the aim of solving dark incidents plaguing their world.

Based on the comic series of the same name, Tower of God is a dark fantasy action series. The series centres on a young man’s journey as he battles through a mysterious tower. On the way he builds friendships, discovers rules that govern the tower and faces unimaginable terrors. Tower of God will appear on Crunchyroll in Spring 2020.

Onyx Equinox follows a young Aztec boy after he is saved from death by the gods then chosen to be humanity’s champion. The boy must discard any apathy he feels towards humanity and prove their potential in a fight spanning across fantastical but authentic Mesoamerican cultures. Onyx Equinox will premiere in Summer 2020.

The God of High School

Based on the comic series of the same name, the series follows a high-schooler and friends as they compete in a tournament. During this tournament they borrow power directly from the gods and manage to uncover a mysterious organization. If they manage to win the tournament they win their heart’s deepest desire. The God of High School will be on Crunchyroll soon.

Another series based off a comic series of the same name. Noblesse is a fantasy series that follows a powerful vampire nobel who is awoken in modern civilization after a 820 year slumber. He makes some new friends as they go on a dangerous adventure while attempting to uncover his past and combat a secret organization. Noblesse will be on Crunchyroll soon.

While this is still a working title, the plot is pretty clear. Set in 1870, Japan, the series follows a number of different characters; a former samurai, a yakuza bodyguard, a spy and a geisha assassin. The group are attempting to find their place in a rapidly evolving Meiji-era while running from the sins of their past. The series is also inspired by historical events. The series will be on Crunchyroll soon.

Based in a post-apocalyptic London, twelve 23-year-old psychics. They must resist their darkest impulses and attempt to discover their better angels in an attempt to rebuild society. The series is based on the graphic novels by Warren Ellis & Paul Duffield. FreakAngels will be on Crunchyroll soon.

And finally we have High Guardian Spice. Four girls train to become great heroes at High Guardian Academy. During their time at the academy they will form allegiances, uncover betrayals and discover true identities. All the while preparing to protect the world from an unknown threat. High Guardian Spice will be on Crunchyroll soon.