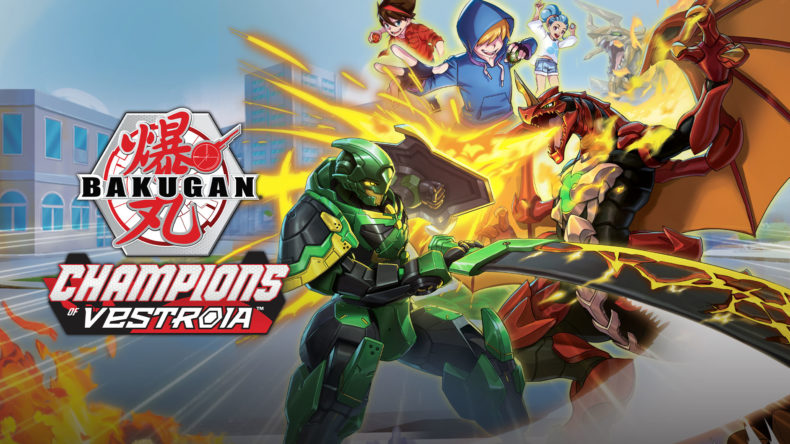 Some of my fondest childhood memories involve getting overly invested in the latest fads. I was the perfect age for the Pokemon boom of the 90s, had a huge collection of Yu-Gi-Oh cards, and even owned a Beyblade or two. Unfortunately, by the time Bakugan came along I was replacing japanese children’s toys with cider and regret. After watching a couple of episodes of the anime on YouTube and playing a few hours of the latest, Wayforward’s Bakugan: Champions of Vestroia, I think battling giant creatures would have been a better use of my time than binge drinking.

After creating a cool teal-haired child to play as, I was immediately thrown into the world of Bakugan. My character didn’t have his own Bakugan, but had always wanted to become a Brawler. He watches all of the Awesome Brawlers’ (the protagonists of the anime series) Viewtube videos, and talks about very little else with his school friends. Fortunately for my little Lyle, a rumbling in the forest turns out to be the sound of a Bakugan crashing down from space, waiting for a kid like me to battle it against other gigantic monsters.

There are five Bakugan to choose from at the crash site, all instantly recognisable to long term fans and representing the five elemental types. After much pondering I decided on a flamboyant Haos (light) type Unicorn and never looked back. A few tutorials from Viewtube later, and I was ready for my first Brawl.

Each Bakugan has four abilities to choose from in battle, ranging from simple attacks, to buffs and healing. To gather enough energy to use one of these abilities, you’ll need to run your child character around the BakuCore field and collect Cores (glowing hexagons on the ground) to power up your titanous pal. Cores glow brighter if they contain more energy, so you’ll have to decide which hexagon to collect first to efficiently prepare your Bakugan for battle. This would be simpler if your opponent wasn’t trying to do the same. 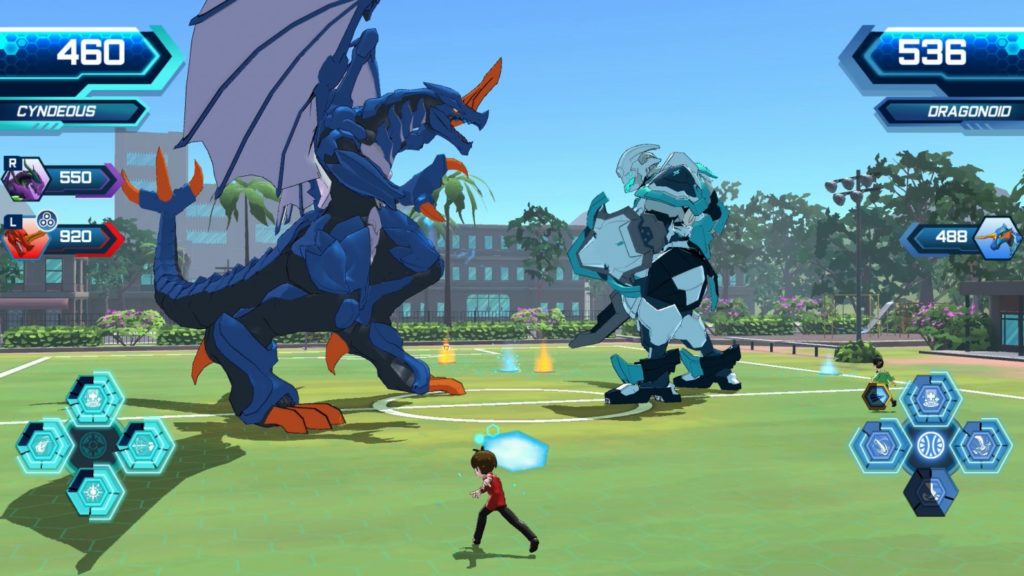 One of the most impressive aspects of the battles in Champions of Vestroia is just how huge the Bakugan are compared to your character. The sense of scale makes the creatures clashing feel all the more epic, and the over the top animation of the abilities (although occasionally causing slowdown) only adds to the drama.

You’ll soon discover that despite how long it took your character to get their first Bakugan, that the small village you live in hands out the massive monsters like candy on Halloween. Sometimes you’ll be given a new ally (or two) for beating someone in a battle, or in a hidden nook of the environment. My strongest Bakugan (a Darkus type T Rex) was given to me by a toddler for finding his missing football. You can take any 3 of your Bakugan into battle, which means you can ensure your team is balanced when facing any combination of flaming Cerberus or water mech.

As you progress further into your adventure you unlock new abilities to equip to your Bakugan, with countless combinations to experiment with. Some abilities improve when used after applying a specific buff, so it’s important to equip moves that compliment each other if you want to dispatch of your foes effectively. Each elemental type has their own strategy they focus on to overcome the enemy. For example Haos types apply buffs to improve their speed in battle, whereas Darkus types deal damage to themselves to cause even more pain to their opponents.

The early battles were fairly slow paced, and I struggled to find much enjoyment in the simple act of running around collecting cores to slowly charge my Bakugan’s energy. In the final few fights of my preview however, I had earned enough money to buy a new ability for my character. There are a range of these to purchase from the store, that aid in making core gathering a more efficient and enjoyable experience. Although a simple movement upgrade seemed like a good idea, I opted for the ability to collect cores by running over them instead of having to slowly chuck them towards my monstrous ally. If the final game allows for more of these handy upgrades, I think I’ll enjoy the combat even more. 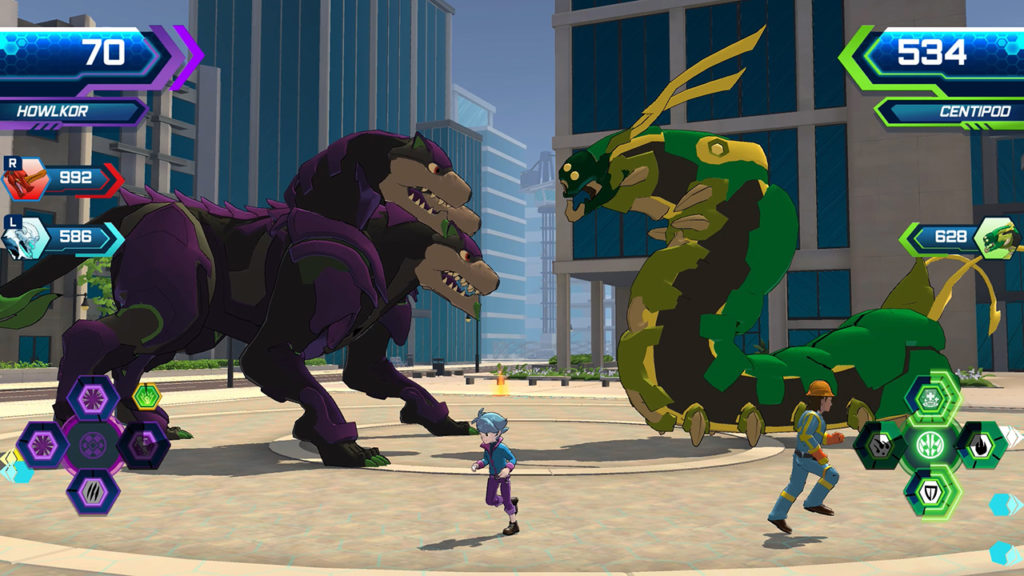 Outside of battle, you can freely move around the areas of the map you’ve unlocked. There are plenty of hidden items to find around the environment, alongside shops for abilities and clothing, and side quests. Quest givers are easy to spot, with NPCs sporting the traditional exclamation mark to grab your attention. The quests themselves were fairly simple in the early hours I previewed, generally expecting you to fetch an item from the other end of town. All of your objectives are marked clearly on your map, so getting lost isn’t an option.

In the time I spent with Champions of Vestroia, I really wasn’t able to get a sense of where the story was heading. All that really happened (after I obtained my new Unicorn friend) in this opening chunk of gameplay was a school tournament to find the best Brawler among my peers. Although I can’t confirm if the narrative will be as engaging as the Saturday morning cartoon, series veterans will certainly appreciate the references to the Awesome Brawlers and their favourite Bakugan.

Although it took a little while to get going, I really enjoyed my time with Bakugan: Champions of Vestroia. If Wayforward continue to add more interesting systems as you progress through the game, then the Switch exclusive could be a must play title for Bakugan fans.