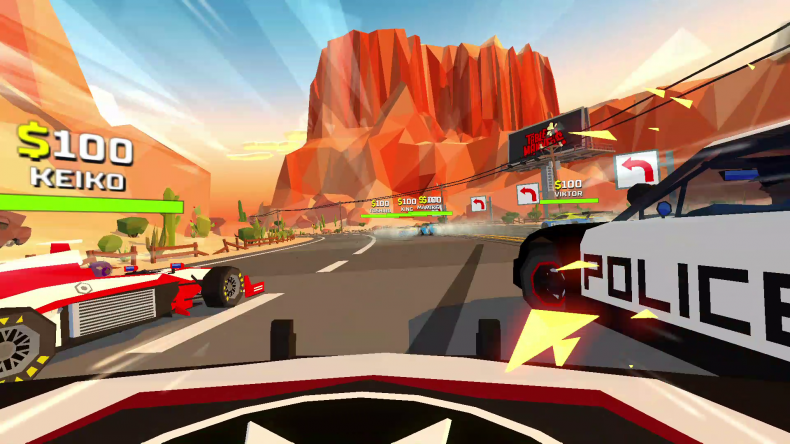 Hotshot Racing channels arcade racers and sports colourful polygonal visuals and boost-fuelled drift gameplay at 60 frames per second in the single player, regardless of the platform.

The racing game features eight different hotshot drivers, each with their own personality and multiple varied four-wheeled rides. There are also sixteen tracks from locations across the world and multiple game modes for players to prove their driving abilities.

Watch the reveal trailer below:

“When we first played Hotshot Racing we were immediately transported to the halcyon days of our youth when we used to pop 50p coins into classic arcade racers like Virtua Racing, Crusin’ USA, SEGA Rally and others that used to punctuate seafronts across the UK” said Simon Byron, Curve Digital’s Publishing Director. “It’s fantastic to see this type of gameplay make a triumphant return and we can’t wait to see what people make of it!”
Hotshot Racing features multiple single-player and multiplayer game modes, both online and offline. It also includes 4-player local split-screen co-op. The modes include:

Hotshot Racing is due for release this year in the Spring, and will launch on consoles and PC. It is currently available to Wishlist on Steam from today.

Likes to shoot stuff and wear pretty shoes. Is a BEAST at Titanfall.
MORE LIKE THIS
Curve DigitalHotshot RacingLucky mountain GAmesracing game