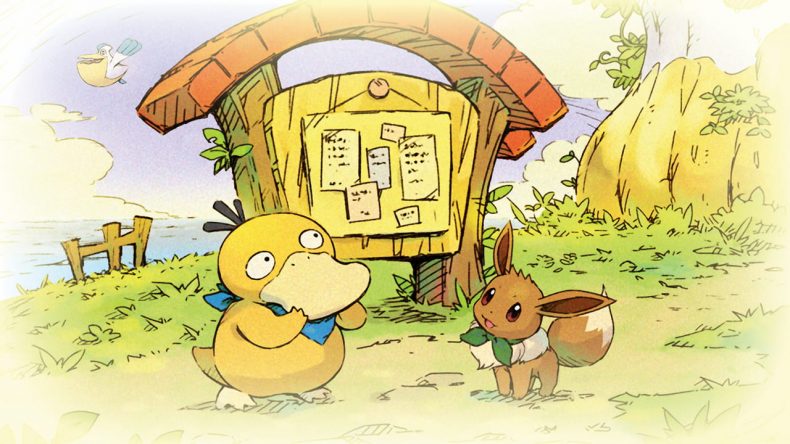 Pokémon Mystery Dungeon: Rescue Team DX is a gorgeous little dungeon-crawler from Spike Chunsoft. But underneath that cute exterior is a game with surprising depth and it can be fairly challenging in places too. To help you out on the road to Rescue Team success, we’ve compiled a few tips. They’ll hopefully explain some of the less obvious mechanics, and help you on the road to victory. Pokémon Mystery Dungeon: Rescue Team DX’s dungeons play out on a grid, with you being able to move in the 8 main compass directions at any one time. No matter how many Pokémon are in your Rescue Team at any point, you only control a single Pokémon. This is usually your own monster from the start of the game, but you can rotate between your main team members with the + button.

Each movement on the grid effectively counts as a “turn” and when you move, all other Pokémon, including enemies will move too. You can’t move and attack on the same turn, so you need to choose one or the other. Facing an enemy and pressing Attack (the A button) will cause your Pokémon to attack with a recommended move based on the enemy. If there is only one enemy next to you, pressing A will automatically swivel your Pokémon to face them and they will attack. Should you want to change the direction you Pokémon is facing without moving, simply hold down the Y button and move the control stick or D-Pad until you’re facing the intended way. Each Pokémon can learn up to four moves to help you on your quests. These can be a mixture of attacks and special moves that create buffs or debuffs. It is important you understand how each of these moves works for the Pokémon you choose to control so you get the best out of them. Some moves can only attack enemies on the next grid space, whilst others have longer ranges. It is always advisable to have at least one ranged move per Pokémon to give your Rescue Team options in a pinch.

As is always the case with Pokémon games, different Pokémon types are weak or resistant to different attack types. Fire Pokémon are weak to Water attacks for example. To avoid you having to memorise all of that, the game provides some handy in-game advice. Holding the ZL button will bring up your four move options. Next to each will be a little icon denoting how powerful it will be against the enemy you are facing. A red target means it will be very effective, an orange circle is normal damage, and a blue triangle denotes an ineffective attack. A blue cross denotes a move will have no effect, so avoid using these moves on enemies.

3. Manage your PP and Hunger Other than the health of your Pokémon, there are another two metrics which need your attention whilst in dungeons. The first is PP and denotes how many times you can use each of your moves. Each move will have a finite number of uses before it runs out. Once it has, a red PP icon will display next to that Pokémon’s name in the top-right of the screen. Drink a Max Ether or Max Elixir to refill one move’s PP to its maximum.

The other thing to keep an eye on is your Pokémon’s hunger. This depletes the more you move around a dungeon. So if you’re a keen explorer, you’ll find this goes down quite quickly. Your hunger score is out of 100 and is shown in the orange circle in the top-right corner. You’ll get a notification on screen when it drops to 20 and then 10. If you let it reach zero, your Pokémon will dramatically lose health as it moves. To cure hunger, your best bet is an Apple of some sort, although there are some other items you can find which cure hunger too. It’s worth noting hunger only depletes on the Pokémon you are controlling, so another method to combat hunger is to keep switching control of Pokémon to give your more exploration time before you need to refill. Every time you complete a dungeon, it will signal the end of a day. Sometimes this will progress the story or not depending on which dungeon you chose to venture into that day. At the beginning of each morning, you’ll be greeted by your Rescue Team partner. Then, more often than not, Pelipper the Postman will fly in and deliver some literal Air Mail to you. This will be a mix of headline news involving your fellow Pokémon, or even new Rescue Quests that you can accept. Crucially though, there’s always a tip or two included in there as well.

Most of the time, these will be reminders of certain controls, which for the most part you’ll dismiss because you already know them. However, it’s still worth checking them out as they serve as great reminders for certain controls or options you may have forgotten about during your playthrough. Also as an added bonus, there will sometimes be additional items in letters that you can snap up for free. Sometimes they will even be Dojo tickets which allow you to train and level up your Pokémon.

5. Manage your money and items before each quest Pokémon Mystery Dungeon: Rescue Team DX has a very cruel penalty system for failure. If all your Pokémon die in a dungeon, then you will fail the quest. The cost of this is more than just sadness and wasted time though. The game also takes any items and money you were holding at the point of your death. This includes items you found on the quest, as well as those you brought with you initially to help you out. And it’s the same money as well, leaving you completely empty-handed.

This is why it is critical that you manage both your items and money before each quest. The Felicity Bank in Pokémon Square should be your first port of call to deposit any unwanted money. It will be safe there even if you die. Plus you get a free item for each day that you use it, so that’s an added bonus. The Kangaskhan Storage is for keeping items safe. Also, it’s where you can withdraw items you might need on an upcoming quest. Store anything you won’t need for your next mission. Also, always try and leave a few Toolbox spaces open for items you will discover in the dungeon that day. Gummies are rare items that are found in chests in dungeons. If you’re lucky you might also get one as a quest reward. They come in two different varieties; Rainbow Gummi and DX Gummi. Gummies can be consumed in the Rescue Camp area, just go left from your Rescue Team Base. Select a Rescue Camp area, and then click on the Pokémon you want to upgrade. I would recommend focusing on your main two members as a priority unless you know for certain another Pokémon is always going to be your third member.

Rainbow Gummies upgrade a random stat by 1 point, so say Attack or HP or Speed. If you’re lucky you’ll get a bonus, and the random Stat will go up by three points instead. Sometimes as well as a Stat upgrade, you’ll also get a brand-new Rare Quality. These are specific skills a Pokémon has and often they benefit your entire party. If you get a new Rare Quality and your Pokémon already has one, you need to choose between the current one and the new one being offered. DX Gummies act in the same way as Rainbow Gummies but guarantee a new Rare Quality. So use these only if you specifically want to change the Rare Quality of your chosen Pokémon.