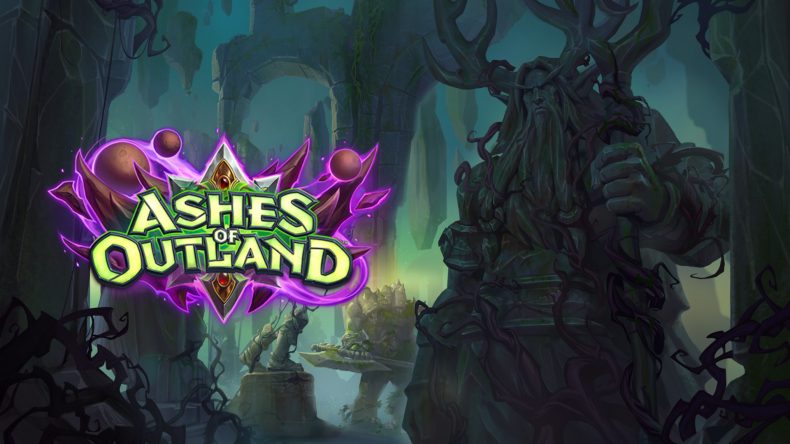 A Collectable Card Game is nothing without new cards. Over the 6 years of its existence, Blizzard have found a number of interesting ways to add new cards to Hearthstone. From solo expansions to booster packs, you can always rely on there being 3 events a year to freshen up the game. I’ve been playing since the Open Beta, and I still get excited for each new set of cards. The first bundle of this year is Ashes of Outland, in which the main focus is World of Warcraft favourite Illidan Stormrage and his new class, The Demon Hunter.

Fans have been desperate for a new class ever since the launch in 2014, with WoW itself having more classes than its card game counterpart. Now, 6 years later, the Demon Hunter is here. With some powerful early game minions, the lowest mana cost hero power and huge card draw potential – it was (before the fastest nerf in Hearthstone history) the most powerful class in the game.

Exclusive to the Demon Hunter is a new mechanic, Outcast. To activate a card with Outcast, you need to play it when it’s on the far left or right side of your hand. Knowing whether to play a card when you first draw it on the right, or wait until it’s all the way on the left, is crucial when playing as the new class. Many an over eager Demon Hunter will play an inappropriate card the moment they draw it, just to activate Outcast. Unlocking the new class and most of its cards is simple enough. A week before the expansion launched, a new 4-stage solo adventure released with the reward of Illidan and the majority of his cards. It’s an easy thirty minute playthrough, with premade decks that will help you get used to the class. For a new player, having the framework for such a powerful deck immediately means they can jump into ranked play.

As well as the Demon Hunter, new and returning players now get access to a free deck after completing the tutorial, so there’s never been a better time to get into the game. New expansions always bring in new players, but Blizzard really have ensured that the world’s most accessible card game rewards newcomers more than ever.

Outside of the new class and incentives for new players, there are oodles of cards available for all of your other favourite heroes too. New to Ashes of Outland is the Dormant effect. Cards with Dormant take 2 turns to awaken on the field – but when they do, are uber powerful minions with powerful effects. Waiting patiently for a huge beast to wake up and decimate your opponent is a viable strategy, if you think you can survive that long.

Each class has also been given a “Prime” Legendary card. Initially these cards are fairly mundane, but when they die you shuffle an extremely powerful card into your deck. If your deck is capable of surviving long enough to find your prime card, you’ll get a lot of value from these new legendary cards. It’s not possible to talk about all the new additions in one place, but there are some very exciting cards just waiting to be added to new and established deck archetypes. Paladins have new Libram spells that you can reduce the cost of, Rogues have a load of new Stealth cards and Secrets, and Mages have spells that reward you for having no Minions in your deck. There are dozens of options just waiting to be tested against the ranked ladder.

The one complaint I had with Ashes of Outland has already been rectified, and that was the power of the Demon Hunter class. Obviously you want a new class to be viable and fun to play as, but you couldn’t win as any other class for the first few days of the new Meta. Fortunately, Blizzard was ready with the nerf hammer and within days of launch, a few of Illidan’s cards were made to cost more mana and balance was restored. It’s still a fun class to play as, with the potential to win at even the highest level, but you no longer have to worry about them overpowering you at every turn.

Ashes of Outland is absolutely one of the most impactful expansions in Hearthstone’s history. The Demon Hunter is a great new addition to the game, and coupled with the free deck for new players it’s a great time to start your card collecting journey. With new mechanics, cards and content, I know I’ll be happily shuffling my way up the ladder until the next expansion drops.

Previews
Ashes of OutlandblizzardHearthstoneworld of warcraft