previous
The complete guide to defeating Nemesis in Resident Evil 3 (2020 remake)
random
next
The Riftbreaker is a new RTS/RPG hybrid, and it's great
1 comment 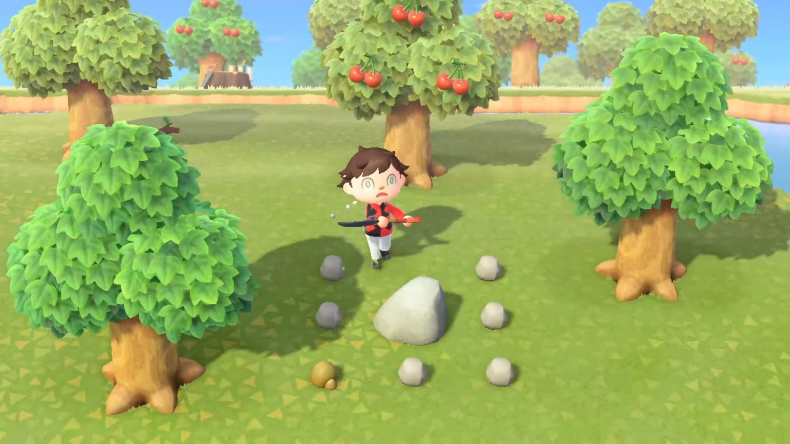 Since its release, most of us have been putting many hours into Animal Crossing: New Horizons. Over 30 for me, with others doubling or trebling that figure and then some. It’s an extremely relaxing game, coming along at the perfect time to bring us joy…and indentured servitude to Tom Nook, of course.

But it’s not always relaxing, is it? Ol’ “Knee Breaker” Nook is always wanting more from you, your neighbours forgotten as you work yourself to the bone to meet the raccoon’s quotas. He always thanks the community for helping fund/build the latest project, but what do they ever do? Run around with their arms out like an aeroplane, or sit on their arse drinking coffee, all while you go out mining, chopping wood and generally doing all the backbreaking jobs that keep Nook’s island bringing in new visitors and residents.

“We need a shop,” Nook says. “You go collect the materials needed,” his real meaning. He asks you to search out plots for the next batch of homes, his expansion plans gaining traction. Which is where my story truly begins. I didn’t need to provide materials for building these houses, instead only needing to build furnishings so these newcomers would feel at home straight away.  Forgetting that the rest of us started out in tents and in debt. Anyway, off I go to read the list of requirements for each home, before hauling my tools around the island to gather the materials. Wood of all kinds, a few branches, even some weeds, simple enough.

Then we get to the iron.

Iron is only found through hitting rocks with a shovel, which can only be done up to seven times per rock, before you have to wait until tomorrow to try again. I scoured the island for rocks, my shovel bouncing off them as my search began. You know what I got? Stones. I moved on, the next rock giving out more stones and a little clay. No iron. This happened again and again, my efforts earning me the bare minimum of iron nuggets. I needed two dozen nuggets. I kept at it, this time I was rewarded with Bells. Bells! At any other time, extra cash would be great, but all I wanted was iron. I even began flying out to random islands, but my luck was as rotten as ever.

The funny thing is, on those random islands my luck was much better when it came to fishing. I caught Football fish, Oarfish, Blue Marlin, even a Sturgeon, then along came the biggest one: a Coelacanth! I didn’t even realise how rare that one was until others told me. My friend’s reaction when he saw it in my museum was priceless. This luck didn’t extend to March’s elusive String Fish, but it still extends to my catches today. Oarfish abounded just yesterday. Not that Nook cares about fishing. He doesn’t make money from the museum, he even loses money as his underlings Timmy and Tommy pay top dollar for my catches of the day. Though let’s be honest, the money I make inevitably gets back to Tom Nook as I pay my ever-increasing mortgage.

Through patience and a buttload of Nook Miles spent on random island flights, I finally found the Iron needed to complete the first batch of new homes. There was some fanfare and Tom Nook invited the “resident rep” to say a few words, waving them away with his usual disdain for my existence, but at least I could rest now. Except I couldn’t, because bills still needed paying and nobody else is gonna do any work in Nookville.

The only saving grace of all this work? The beacon of hope during the dark times? Punchy and Victoria, two of the nicest neighbours I could ever hope to get. We don’t talk about Jambette though…

Tales from Animal Crossing: A tale of cheese and “whine”