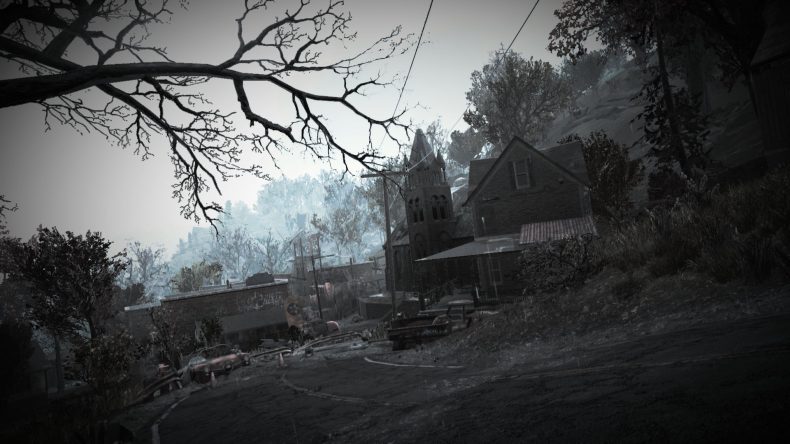 Against my better judgement, I downloaded Fallout 76 again a week or so ago. I deleted the game in a huff back in November after it seemed that my base was corrupted. Every time I fast travelled back to it I spawned inside a rock that I couldn’t get out of. Fallout 76 is a buggy mess, and is, in many ways, a huge disappointment, but whereas I had been able to overlook a lot of its flaws (the woeful stash limit, the graphical glitches, the quest bugs and more) because I was having fun playing it with a friend, spawning inside a rock and losing all the loot I had been meticulously gathering before then was the catalyst for me to abandon it altogether.

The idea of jumping back into a post-apocalyptic game at a time when we are all living through our own version of an apocalypse didn’t fill me with much glee if I am going to be perfectly honest. Also, deleting a game in a fit of pique does kind of sour you towards wanting to play it again. I am, however, someone who is easily swayed, and after being more generous than most when I reviewed Fallout 76 back in November 2018, the reports that this Wastelanders update had managed to address a lot of what make Fallout 76 such a disappointment, I decided to jump back in. Regrettably, I am finding myself having a good time with it. It seems that despite the numerous flaws that still inhabit Fallout 76, I am still a sucker for the thrill that Bethesda games give me. This isn’t my base

Much of my enjoyment in the past had been created by playing with a friend. We were role-playing it quite extensively. My character is called Bella, she’s a washed up society girl whose best days are well behind her. She’s coasted on her looks for so long that she has very little discernible skills, and now has found herself hungover and alone in a world that has no use for her any more. My friend’s character is Colin. Colin is an insufferable prick, a job’s worth know it all. My friend describes him as Rimmer from Red Dwarf, and someone who is “incredibly inept at forming relationships”. I love both of the characters.

Both Colin and Bella woke up at the same time in the vault. Colin had been punched in the face the night before, no doubt for using “I think you’ll find” one too many times on the wrong person, and Bella has a hangover from hell and last night’s make-up smeared over her face. Neither have any choice, everyone else is gone, so they decide to go out in to the Wasteland of Appalachia together. Bella, because she has no skills, and Colin secretly pleased with the female company. This was the basis of my role-play and together my friend and I sank numerous hours, until we both got fed up. About to drop the hottest album of the summer

With the Wastelanders update, Bella has had to go it alone, and I am finding some amusement by continuing that role-playing. The first mission to get Wasterlanders up and running is to find the Overseer at her childhood home in Sutton. Rather than being pleased to see her, Bella chose to be surly and aggressive. After all, she had been traipsing around the wastelands for months on the trail of the Overseer, becoming increasingly frustrated that all she had left the vault dweller’s of vault 76 was a load of holotapes reciting her life story. Nobody cares, Ma’am! In case you hadn’t noticed things have gone a bit to shit since we were last outside! Poor Bella had nearly been killed by the Grafton monster not too long back and both she and Colin had had one too many run ins with the Scorchbeast to be overly interested in what had happened to the Overseer’s childhood sweetheart. Still, it was a pleasant distraction for Bella to be finally talking to another human being rather than the various automatons populating Appalachia.

Wastelanders has given the world of Fallout 76 some much needed life. The Overseer explains that the reason there are more humans moving in and around West Virginia is because news has got out about the the cure for the Scorched plague that Bella and Colin had conveniently discovered (you’re welcome, by the way) and now there are vying factions for me to go and placate and join or destroy. It all feels much more “Fallout” in a world that up until then felt like it just had the paper veneer of what makes a Fallout game so compelling. True to type with the way I play RPG style games, I have chosen to go completely in the opposite direction to that which the Overseer has sent me. Bella and I are revisiting some of the original content and I currently have her travelling all over on the path of the Mistress of Mystery, as a secret band of women vigilantes seems just the right sort of quest for a newly solo Bella to embark on. This quest is still delivered through holotapes and interrogating terminals, however it has given me a new appreciation for the way story is delivered in a Bethesda RPG.

The world may once have felt lifeless with the lack of NPC interaction, but look closer and there are tonnes of examples of where life had flourished before, it is just that you need to take your time and look for it. I’ve been sidetracked on more than one occasion, briefly following another quest from the Wild Appalachia update after reading a poster a woman had put up about her brother being eaten by the sheepsquatch. It took me to a Taxidermy shop in a town I was already visiting as part of the Mistress of Mystery quest. Inside I spent a good hour rummaging around reading terminals and notes to get a picture of a group of cryptid conspiracy nuts, and now I have more clues to follow which I will do at a later date. While following the threads of this and various other quests it has become clear that the world has changed quite a bit since I unceremoniously decided I was out back in November. Wandering the wasteland and I keep coming across random NPC characters in lonely camps who give me little snippets of information, and there are now faction camps dotted around the world that provide an endless source of conflict and loot. There’re hints that as I progress with the new content I will need to make decisions about which factions I will side with that will ultimately change their apparent animosity towards me, and that fundamentally feels like a positive step for Fallout 76.

I can’t promise that I won’t get unreasonably annoyed with something the game does poorly again, but for the time being I am very much enjoying my time pottering around Appalachia. There is a sense that Fallout 76 is slowly moving towards the exciting prospect that the original announcement suggested; a huge open world with a rich environment begging to be explored on your own or with a friend or two. There’s more improvements to be made I am sure, but for now Wastelanders is a movement in the right direction to changing Fallout 76 from a Fallout game in name only, to one that can finally justify its title.

Likes to shoot stuff and wear pretty shoes. Is a BEAST at Titanfall.
MORE LIKE THIS
Bethesda Game StudioFallout 76gaasopen world