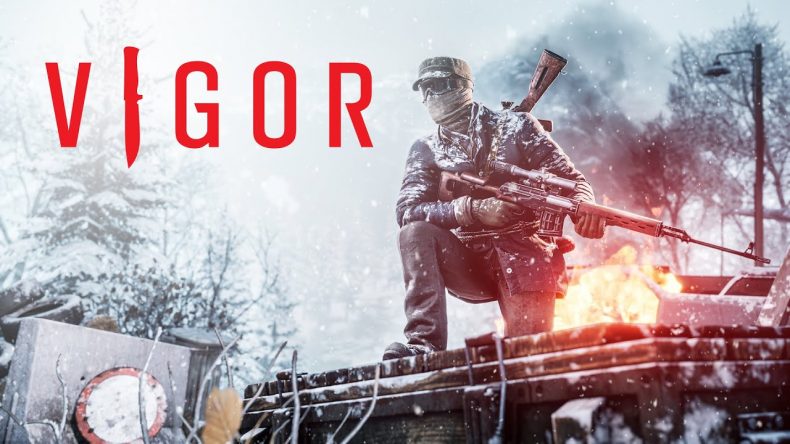 Vigor’s central concept is an interesting one. It’s a multiplayer survival shoot with a difference, and it’s this difference that generates an atmosphere sorely lacking in some survival games. See, rather than just drop into an arena out of nowhere, shoot some folk and then bounce out, Vigor ties its trips into the meat grinder to a delapidated old farmhouse that becomes your base.

Set in the Norwegian wilderness after World War 3 has left much of the world a nuclear wasteland, Vigor sees your nameless survivor, or Outlander, living off the land, scrabbling with other unfortunates for supplies and gear to help make it through another day. In between missions you return to your base, which can be improved and repaired to offer better services and facilities to you. Not only does it give you a hub that’s tied organically to the game world, but it gives you something to work towards and call your own. From a map board in the central room you can select from game modes and mission areas, and then head out into the wild. The idea is not to score the most kills or be the last man standing, but rather to scavenge as much as you can carry and get out of the forest alive before a radiation storm blows with the wind and kills you – or, of course, before another player kills you first.

The map is huge, each area covering miles of woodland, scrubland, and rocky hillsides, old buildings, ruined hamlets and abandoned camps. Rivers run through the landscape, and you’ll often scale veritable mountains, giving Vigor an impressive sense of scale. Each foray is punctuated by an air drop, whereby a crate containing valuable or rare supplies drops into a random point on the map. Ideally, you want to that crate, but looting it will reveal your position to all the other players and make you enemy number one. You can leave the map at any time, too, as long as you can reach an exit point.

Because you have a limited inventory and limited supplies, Vigor forces you to consider your gear before each trip out. If you die, you will lose what you take in unless you have enough premium currency to buy “insurance”. You can also spend this currency, called Crowns, to improve the quality of loot you find. While Crowns are most easily obtained on the cash store, you can earn them in-game by completing regular challenges in the mission areas. Aside boosters the Crowns can be used to buy cosmetics, with all manner of coats, helmets, hats and facewear available. A battle pass system lets you unlock rewards as you go, too, which helps control your spending. The big problem with Vigor right now is how janky it all is. I played on Xbox One and Switch and I have to say, the Switch version has been massively downgraded to me it playable, tonth point that it’s pretty awful, visually. In certain climates you’ll struggle to define items in the world, and in handheld it’s close to unplayable. It does run smoothly enough, but it’s a major cost to the aesthetics. The devs have promised this will be improved when Vigor is fully released, so here’s hoping.

On Xbox it’s a different story, though. Vigor is actually pretty damn pretty, the huge, wild environments carrying a sense of awe and possibility. Some areas are gorgeous to look at, while attention to detail shines through when you stumble across the scattered remains of a passenger jet, for instance, it a forgotten cabin.

In either version, shooting is actually hard. I’d even say it’s hard enough that it feels as though it’s being discouraged. You need to take your time and line up your shots, and as ammo is scarce every miss feels like a blow. Melee combat is an option, but weapon reach and effectiveness feel broken at this point, as you can I effectually swipe at each other with knives all day and do barely any damage. Most of the time I just ran away when I ran out of ammo, and the fact I was never followed or hunted shows that Vigor is more about protecting your claim than laying waste to your enemies. Each time I got the airdrop or was close enough to it to hunt down the player who got it instead, Vigor became a different game. The careful, quiet scavenging and the tension of avoiding conflict disappeared, replaced by either a desperate need to reach the exit while dodging my pursuers or a palpable bloodlust where the only thing that mattered was killing the looter and retrieving those goods. It’s an impressive tonal shift that feels natural and organic within the gameworld.

Vigor has a lot of potential. Bohemia Interactive are no slouches when it comes to this genre having spent years tweaking Day-Z, but it does need improvements in certain places. The Switch version is graphically inferior to a massive degree, but both versions I played need to improve the melee combat and tighten up the shooting mechanics. It doesn’t need more modes, but it does need more events and occurrences out in the wild to lend it more random and unpredictable element. Either way, it’ll be one to watch when it exits beta later in the year.

Senior Content Editor Mick has been playing games for over 30 years and writing about them for around 12. After drifting from site to site for a while, settling briefly at the now-defunct Made2Game and freelancing for the gone-but-not-forgotten NintendoGamer Magazine, he came at last to rest at Godisageek. Mick has been a reviewer, staff writer and content editor here for some time, while also moonlighting a little for Red Bull Games. He has 4 kids, has written 2 novels, and sometimes even manages to pay a bill or two. You'll usually find him defending the galaxy in Destiny 2, battling evil in Diablo 3, or lurking in the background on Twitter. Find him there @Jedi_Beats_Tank, or on XBL (JediWaster247), PSN (Jedi_Waster) or Nintendo (JediWaster).
MORE LIKE THIS
Bohemia Interactiveclosed betademo

DayZ is getting its biggest update of 2022