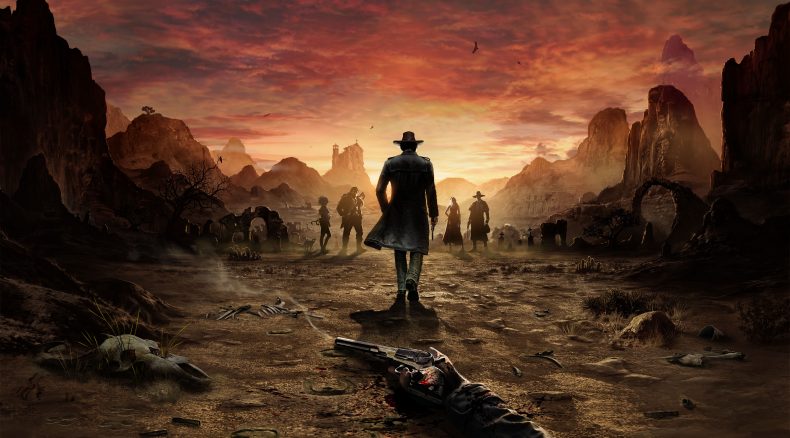 Desperados III is a glorious tactical adventure set in the Wild West. It’s packed full of style, bravado and well-designed levels, you’ll spend hours enjoying. But there’s no getting away from the fact it is a tough game to play. Your decisions need to be well-thought-out and precisely executed to weave your way through the levels as undetected as possible. It’s quite challenging, but we here at God is a Geek have compiled a series of Desperados III tips to help you get started in MiMiMi Games’ latest adventure.

The single most important piece of advice in all of our Desperados III tips, is to accept the fact that you’re going to fail, and die. A lot. The game is designed so that each level is full of mini scenarios of enemies you need to navigate through before proceeding to the next. A single misstep will alert the guards, and a swarm of them will bear down on you with often deadly consequences.

To help you out, there’s a very slick save feature in Desperados III that you can initiate with the press of a button. Upon failure, you can load from the most recent of these three save states. It’s well worth doing every time you make progress in a level to avoid going over old ground. A reminder to save will pop up after a minute has passed without save, but this can be amended in the options to a longer timeframe, should the flashing reminder be popping up too frequently for your liking.

The benefit of Desperados III top-down, isometric style, means you can easily make out your surroundings, and this is intentional. It’s crucial that you survey your surrounding area before moving around. You’ll need to be clear where enemies are, and how they are moving, to look for openings for takedowns, or to move past them unseen.

A quick press down of the left stick on a controller (or the “H” key if you’re on PC) will highlight the specific objects in the environment that you can interact with. These include objects you can pick up, doors, enemies and the numerous bushes and undergrowth that you can hide bodies in to avoid arousing further suspicion.

It’s also a good idea to familiarise yourself with the camera controls to get the best viewpoint in a particular situation. A fully rotating and zoomable camera means you can pitch your view just so for optimum visibility.

3. Pay attention to viewcones, and their colour

Like all good stealth games, the key is avoiding being seen by the enemies dotted around the landscape. You’ll need to make sure you’re aware of not just where foes are, but the direction they are looking, and if this changes over time. Hovering over an enemy will reveal their viewcone, you can even select an enemy viewcone to remain on permanently, which is perfect for timing an action to avoid their gaze.
But the viewcones themselves are more nuanced than that. Hatched areas of a viewcone, for example, mean you can sneak past undetected if you remain crouched. Full-colour viewcones mean you’ll be seen no matter whether you’re crouched or not. The colour of the viewcone is your final hint. Green means the awareness level is low, and the guards are not alerted to your presence. Once you are spotted, this will change to yellow, meaning they will actively seek you out. When it turns to red, you’ve been spotted, and nearby enemies will also be alerted that you’re here and need to be taken care of. Wherever possible, try and avoid viewcones going red, as it will often mean your death, and a swift load of your latest save.

4. Watch out for Guard Houses

Not all red viewcone situations are the same though, and knowing when you can risk being seen and not is also an important consideration. Dotted throughout the levels are various buildings that host additional enemies in them. If you raise the alarm, by letting an enemy viewcone go red, then these buildings will empty, and you’ll suddenly be faced with additional guards to face off against, as well as those who have run to the alarm from nearby areas.

These buildings are known as Guard Houses and are marked on the map with a large red bell icon with an exclamation mark on them. You can hover over these to see how many guards are inside, but in reality, any at all is too many. If there are only a couple of enemies nearby, and no Guard House in the vicinity, a more brash “run and gun” approach might work to polish off the final foes. But if you see a Guard House nearby, it’s advisable to stick to stealthier alternatives.

Sometimes the best method of navigating through certain situations is to distract your enemies. Often their viewcones and placements will make taking them out where they stand or patrol impossible. You’ll likely alert one enemy by taking out another. The solution is to make them stray off their normal route, or away from prying eyes.

Most of the characters you can control have an ability or two up their sleeve that distracts enemies. Some abilities make sounds that cause enemies to investigate what they heard, whereas others cause a stun effect to an enemy, which then puts them on alert to investigate where they otherwise wouldn’t. All are viable options that crucially manipulate the regular movement of enemies to carve up an opportunity to strike.

There are five different characters you can play as throughout Desperados III, and whilst their basic controls are the same, the way you can use them to your advantage varies quite a lot. Knowing the differences between each character can help you understand your options, and open different ideas on how to overcome that next challenge. This is specifically important later on. where you can change between certain characters in levels, as this choice can make all the difference.
For example, central character Cooper is a bit of an all-rounder with close-combat and ranged options at his disposal making him a decent option in most situations. Doc McCoy, on the other hand, is better at long-range shooting, and can clear enemies from afar with ease. The more brash Hector likes dealing damage up close, either luring enemies into his devastating bear trap or towards the sharp end of his axe.

The two female characters, Kate O’Hara and Isabelle Moreau offer even more divergent options. Kate is a master manipulator and can use her good looks and sultry approach to completely distract guards whilst others go in for the kill. Isabelle introduces the supernatural into proceedings, with mind control options and other tactics that are unique to her. This variety is what makes Desperados III so enjoyable, and it’s worth considering which character and their abilities would be best suited to your current predicament.

For more information on the different characters and their abilities, check out our Desperados III Character Guide

To give you an additional edge, there’s also the Showdown Mode that you can use at any time. It pauses the game (except on Hardcore difficulty mode) and allows you to consider your options. But more than that it allows you to plan one action for each of the characters you control in that level. You can use this to devastating effect and tackle some more difficult situations.

It’s most obvious use is to use characters to take down multiple enemies at the same time. Different characters could attack from different angles, and eliminate foes, that would otherwise alert each other if taken down separately. It also allows for more fluid play, where actions can happen closer together than if the characters were controlled individually outside of Showdown Mode. It’s a handy option that is well worth tinkering with, especially if you’re stuck on a section.

Not all the enemies you face in Desperados III are the same, and they react differently to your attempts to distract them. Regular enemies are the most curious, and will almost always fall for your distraction tactics. They’ll wander over to quieter areas thanks to your well-placed whistle from Hector, or Cooper’s coin toss, and be ripe for the picking.

However, poncho-wearing enemies are less easy to manipulate. They’ll stay put and simply look in the direction of your distractions, making them tougher to take down. You’ll need to consider this when plotting how to take them down. Long Coats are the toughest enemies in the game, and only Hector can take them down by himself, with his axe.

Also there are Civil Zones in certain levels, where you’ll be milling through public areas with harmless civilians. You are safe in these areas, unless you do something suspicious. Even though they won’t attack you, if a civilian clocks you being a Desperado in their viewcone, they will alert guards all the some, so still be wary before you do anything in these sections.

It can often feel compelling to have to deal with each enemy. You feel obliged to find a way to kill each one and dispose of the body, save and then move onto the next one. This is a fairly solid strategy, especially if you consider some of the other tips in this guide too. However, it is worth remembering that there is an alternative that works just as well.

Sometimes sneaking past the enemy, either by dodging their viewcones or making use of the hatched areas to move around in a crouched position is just as good. Make use of cover, and bushes to hide from view, and simply move past your enemies to the next area. It doesn’t help in all situations, particularly those that require you to kill certain enemies in areas to progress, but it is a viable, albeit less heroic option. And it’s certainly preferable to reloading for the thirtieth time because you can’t quite nail despatching a certain enemy group in front of you.

The last of our Desperados III tips feels obvious, but you’d be amazed how many people overlook it. At the start of the game, you’re asked to select one of four difficulty levels. It’s worth noting that even on the “Normal” setting, Desperados III still provides a hefty challenge, so don’t expect to just breeze through it.

The most important thing is to enjoy the game, and frankly, if that means toning down the difficulty, so you can proceed, that should definitely be a consideration. You can select the difficulty at the start of each new level, so if you found a previous level incredibly tough, consider an easier setting for the next level, as it will allow you to progress the story and see more of what Desperados III has to offer. You can always come back later on tougher difficulties if you fancy, and with a speedrun target time too, there’s plenty of reasons to replay levels long after you’ve seen the credits roll.