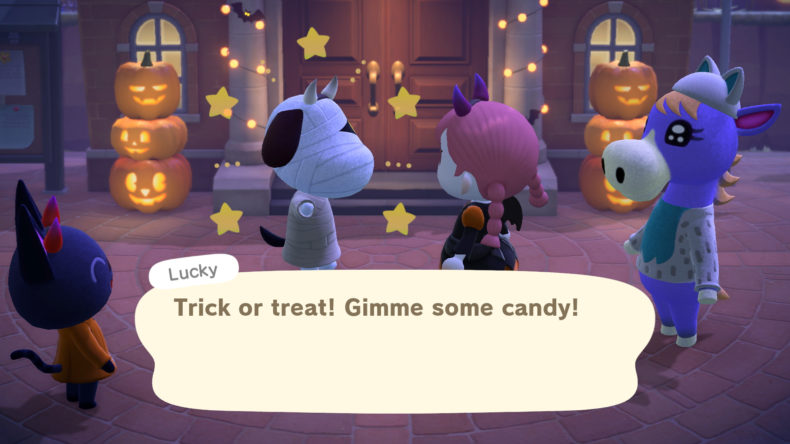 The next update is coming on September 30th, and it’s official. Halloween is coming to Animal Crossing: New Horizons, beginning the next run of seasonal events with something spooky.

“Autumn has come to Animal Crossing: New Horizons, with acorns and pinecones falling from trees, waiting to be used for new DIY recipes. But there’s more content on the way. On 30th September, a free update* is coming to Animal Crossing: New Horizons, available for Nintendo Switch, that adds some spooky touches to the season with Halloween costumes, character customization options, DIY projects and festivities.

Spooky new costumes, eerie character customisations and frightening Reactions can be found in the new Get spooky with the new Animal Crossing: New Horizons update on September 30th!”

There will be plenty of Halloween activities to partake in when the update drops. Whether you want to grow some autumnal crops, or prepare for the spooky day itself with some scary decorations.

“Growing Pumpkins – Pumpkin starts are available in-game from Leif year-round or from Nook’s Cranny during October. Once pumpkins are grown, they can be harvested and put to use in pumpkin-based DIY projects.

Halloween Preparations – Pumpkins are just the beginning of the Halloween-themed festivities coming up. With the big day just around the corner, players can start stocking up on candy early. It is possible to purchase costumes, such as a mage dress or a mummy outfit, at Able Sisters’ shop during the month of October. Body paint and coloured eye contacts are available by exchanging Nook Miles. Fellow residents will also give out Halloween-themed DIY recipes.

Halloween Night Celebrations – When Halloween night arrives on 31st October, after 5 p.m., neighbours will gather in the plaza which will be adorned with an array of Halloween decorations. Players will also receive a visit from a mysterious guest: Jack, the “czar of Halloween.” By giving Jack lollipops and candy, players earn spooky in-game rewards. Saving some candy for neighbours helps players to avoid getting pranked by them. Luckily, they can learn a couple of new Reactions to properly express their feelings of fear.”

Animal Crossing: New Horizons continues to give you a plethora of reasons to check back in on your villagers. It sounds like it will definitely be worth taking a break from horror movies on October 31st, to spend some time dressing up with your virtual friends.