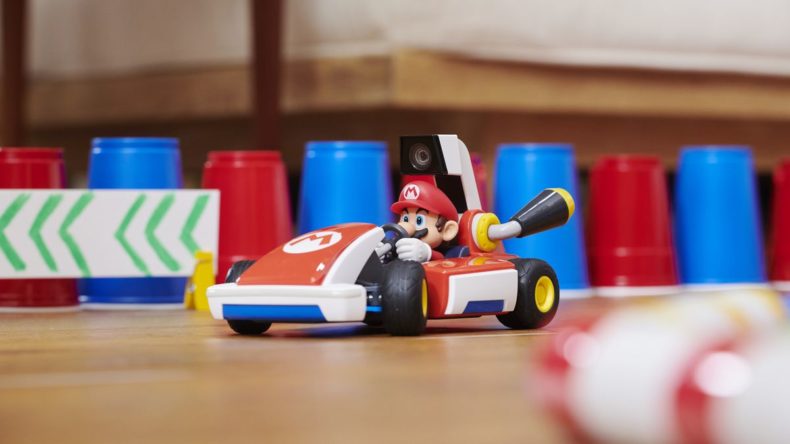 Nintendo and Velen Studios have released a brand new set of Mario Kart Live: Home Circuit developer blogs and videos that go into detail on the Behind the Scenes and a Gameplay Deep Dive.

We got a first look at Mario Kart Live: Home Circuit at the recent Super Mario Bros. 35th Anniversary Nintendo Direct. It has been created in partnership with Nintendo and Velen Studios and uses AR technology to bridge the gap between the virtual world of Mario Kart and the real world of your home.

Mario Kart Live: Home Circuit includes one kart – with either Mario or Luigi in the driving seat, depending on the set they choose – plus four gates, two arrow signboards that can be used to enhance courses and a USB charging cable for the kart. The software will come as a free download from the Nintendo eShop, and once downloaded will synch up with the physical kart hardware.

“Get your engines revved up for Mario Kart Live: Home Circuit, which launches just in time for the holidays,” said Nick Chavez, Nintendo of America’s Senior Vice President of Sales and Marketing. “Whether you’ve always dreamed of turning your living room into Rainbow Road or want to prove once and for all that you’re the fastest racer among your friends and family, we hope this new Mario Kart experience brings smiles to people of all ages.”

The set up for Mario Kart Live: Home Circuit involves placing the four gates around your living space, then driving through each of them in turn to create a course layout. There’s scope for creativity as many different course shapes can be designed full of twists and turns. The recommended space is roughly 12′ x 10′ for the best gameplay experience, but beyond that most living spaces can be transformed into a unique Mario Kart experience.

The main mode of Mario Kart Live: Home Circuit is Grand Prix. This mode lets you race against Koopalings across eight Grand Prix cups, featuring 24 different races in total. Courses will feature the usual Mario Kart elements that provide boosts and hazards to players, as well as different environmental themes, such as underwater, volcanic and retro themes. Collecting coins in-game will also unlock customisation options, allowing players to change their on-screen look with different costumes and kart types. Similar to Mario Kart 8 Deluxe, there’s also a steering assist option to help the kart stay on the track and allow younger or less experienced players to join in on the fun.

Likes to shoot stuff and wear pretty shoes. Is a BEAST at Titanfall.
MORE LIKE THIS
Developer BlogNintendo DirectSuper Mario Bros. 35th Anniversary