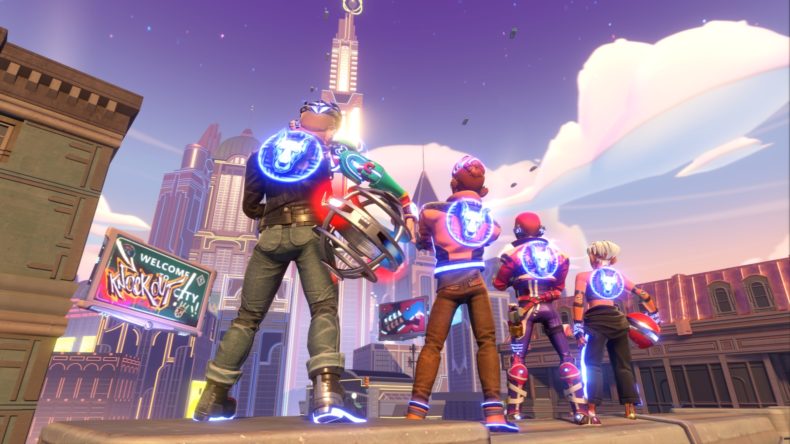 With only a couple of weeks until launch, Velan studios are showcasing the sounds of Knockout city in a new blog. Full of thwack sounds and an eclectic selection of tracks, it seems the audio will be just as important as the visuals when the game drops on the 21st.

“Velan Studios is bringing the familiar “Thwack” sound (the noise a dodgeball makes on impact) to Knockout City, its upcoming team-based dodgebrawl title set to launch on May 21. To give players a deeper dive into Knockout City’s charming universe – one where audio is equally as important as visuals – Velan is showcasing the process behind the game’s signature sounds that create for a truly immersive environment in a new developer diary and blog.

In the blog, the team reveals their collaboration with music duo Sonny and Matt of The Soundlings — known for their sonic visions and music composition for DC’s Shazam!, HBO’s Lovecraft Country, Netflix’s Narcos Mexico and more – to create Knockout City’s Original Soundtrack comprised of 19 different tracks. During their brawl, players can listen to music on Knockout City’s radio station, “KO City Pirate Radio,” featuring songs from different bands and personas, all created by The Soundlings, who researched over 30 genres in order to create this custom music for the epic upcoming battle game.

Knockout City will be available May 21 on PlayStation 4, Xbox One, Nintendo Switch, PC on Origin, Steam and Epic Games Store, and PlayStation 5 and Xbox Series X|S via backwards compatibility, in addition to EA Play and Xbox Game Pass Ultimate members. No matter the platform, the game will support full cross-play and cross progression. At launch, players will have access to a free trial for a limited time during which the full game will be playable, and if players want to continue playing after that, they can purchase the game for $19.99.”

I’m definitely going to dodge some balls on the 21st, especially since Knockout City will be available day one on Game Pass. Hopefully this exciting new multilayer game will be just as successful as another Ultimate Knockout of a title released last year.