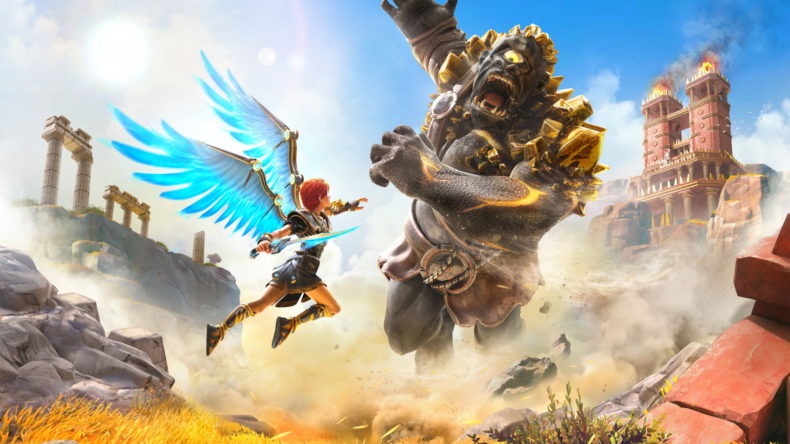 Before we start, two things should probably be addressed. Yes, Immortals is quite like Breath of the Wild and yes, Gods and Monsters was probably a better title than Immortals Fenyx Rising. Regardless, I think you should throw out your preconceptions before going in because you might be pleasantly surprised.

I recently got given the opportunity to play the first four or so hours of Immortals: Fenyx Rising so let’s take it from the start: The central story is told by Prometheus and Zeus, locked in a wager telling Fenyx’s story, a puny mortal attempting to challenge the might of Typhon. If he manages to win, Prometheus earns his freedom; but if Zeus is right Prometheus must help him take down Typhon. A simple but rather effective story. You play the role of Fenyx, a shield-bearer left stranded after a boat is wiped out in the storm.

Naturally enough, I made a green character with luscious blue hair and the two narrators, Prometheus and Zeus, just loved it. This set me up for the rather odd tone of Immortals quite well. It’s a strangely humorous game, and the narrative is constantly interrupted with one-liners and little asides. The general flow of the story seems to follow this trend too. After being shipwrecked, you immediately find legendary gear and take on Typhon’s minions. It doesn’t care very much about building you up or feeling organic. Prometheus and Zeus are perfect representations of the unreliable narrator trope and actively play up to it in meta-ways. Is a boss too small? They’ll grow it right in front of you. Too few enemies? They’ll throw a few more in. 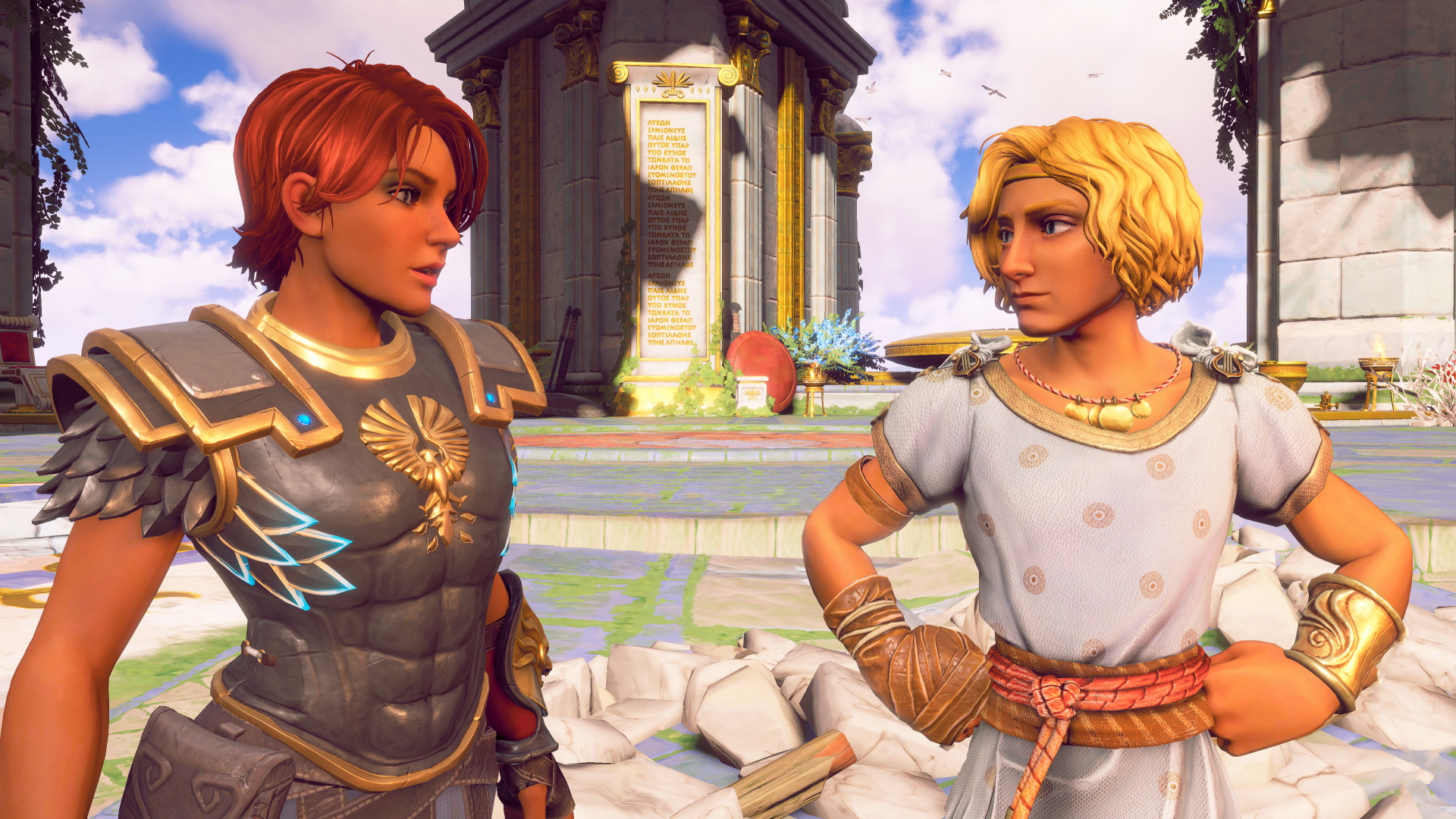 They care more for an interesting story than an accurate one and, in this sense, I can’t guarantee if any of the story is canonically correct. They can mess with the fabric of the story without a moment’s thought and that makes the inconsistencies more palatable. It doesn’t get bogged down in explaining how any of this might happen within Greek mythology but the accents and references add a nice touch. Characters don’t sound American, they actually sound Greek. This is, fundamentally, a power fantasy on behalf of the narrator.

It helps that it plays well and the music is great. A large portion of my time with Immortals was spent with Achilles’ sword and the Axe of Atalanta. The attack systems feel somewhere between Assassins Creed and a Batman game. You can employ light and heavy attacks for different purposes as well as a block, parry and dodge. You later unlock a bow that can be used in tandem with combos to clear distance from afar. Immortals has a certain synergy with each attack that sends you flying between attacking soldiers. Its combo system is far more arcade-based than Assassins Creed with inhuman dodges and lunges but its base systems are rather similar. Fitting with typical open-world Ubisoft design, this is not the only staple it learns from Assassins Creed but it seems rather toned down this time. The outpost function is gone but a sly reference is made to the leap of faith through its vantage points. Within each of the main sections of the map, there are sights to climb up to and survey the area. Luckily, traversal is rather different this time around.

Learning from Breath of the Wild before it, Immortals has a stamina system and a flying system, of sorts. Climbing requires stamina and if you don’t have enough you will fall, more than likely, to your death. After meeting Hermes and literally and figuratively jumping through hoops, you are granted a pair of wings that can make you go fast, double jump, and float. This has a little more functionality than Breath of the Wild’s Paraglider. You can upgrade your skills to boost with it and you can combine that with other traversal skills to get to places just a little quicker. It feels a little closer to Infamous or prototype with these skills and is significantly faster for general movement. 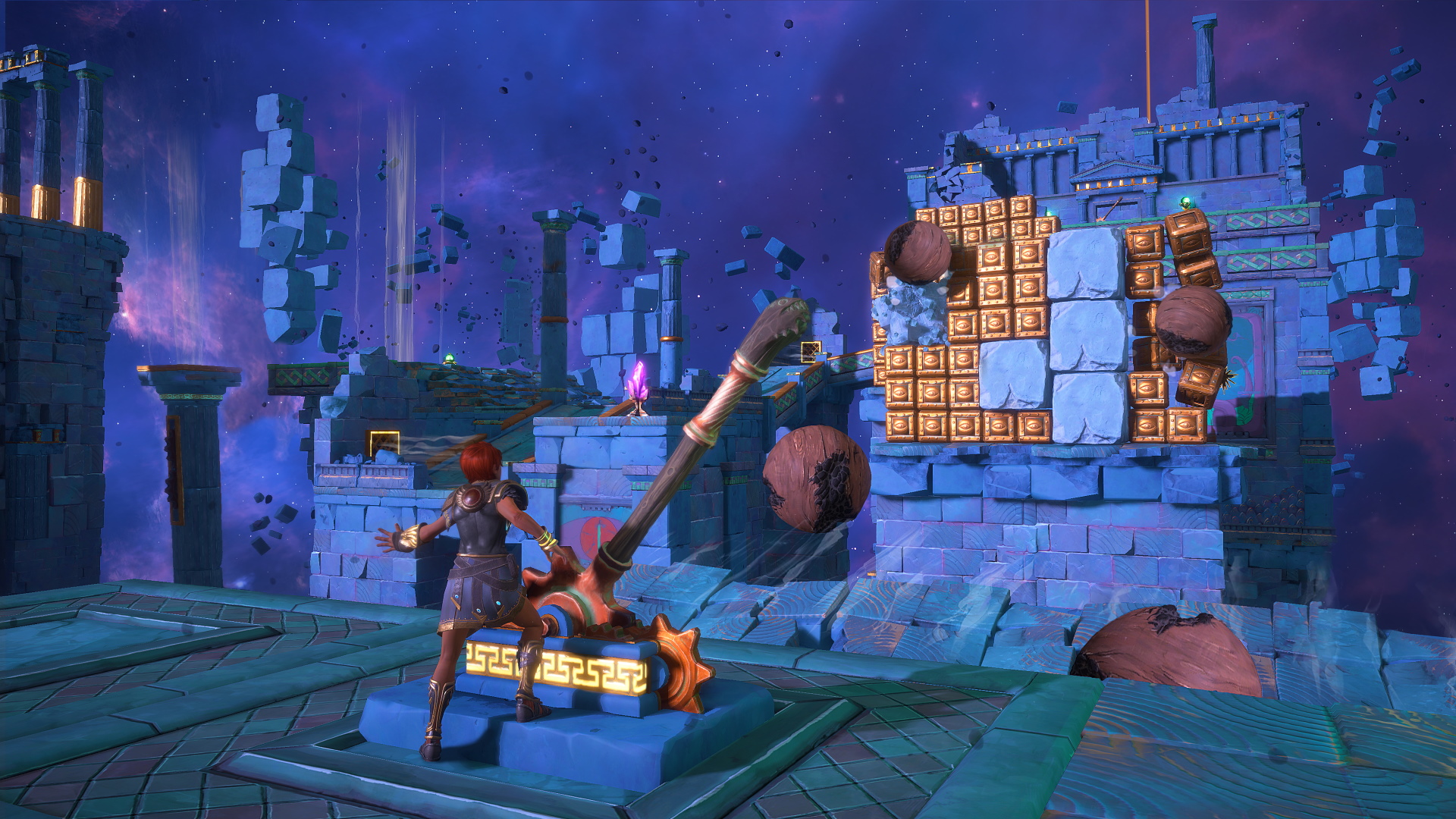 And this feels like what Immortals is going for. It grabs some of the formulae from other popular games and adapts it in its own way. Fittingly, playing it in October, it feels like a Frankenstein’s monster. This did occasionally clash in my time with it. The jokes were consistent but not always consistently funny which could become a little distracting and puzzle quality wasn’t always great occasionally relying on old school tricks rather than creating new puzzles. This is, of course, one of the issues of making huge games. Occasionally areas and objectives can feel a little hollow.

The objectives and puzzles span from fighting certain creatures to manipulating weight to fairly obtuse musical puzzles or the chiseling of a marble statue. It was not always excellent but it was always fun. It aims to offer a constant upgrade system but the ends of that system felt transparent from the first hour. You can pick up Ambrosia to upgrade health, Coins of Charon to upgrade your skills, and Zeus’ Lightning to upgrade your stamina at a central hub called the Hall of the Gods. At the speed I was upgrading my skills and the amount I could see in the hub, it felt like there was a very distinct level cap that might be reached fairly early on. One can only hope I’m wrong about that, though.

One further field of progression is the upgrading of potions and gear. You can find new gear in challenge dungeons, much like those of shrines in the title it pays homage to, and they can be upgraded with resources from around the world. Upgrading your axe improves all of that weapon type, and the same goes for all other pieces of gear. This means progression stays regardless of equipment. It might promote experimenting more at the cost of a deep RPG system. Immortals touts itself as a light RPG for a reason and all of those were made clear in my time with it. Whilst there are things to upgrade, it is fairly limited in scope and won’t offer nearly as much customization as Assassins Creed or Breath of the Wild before it. 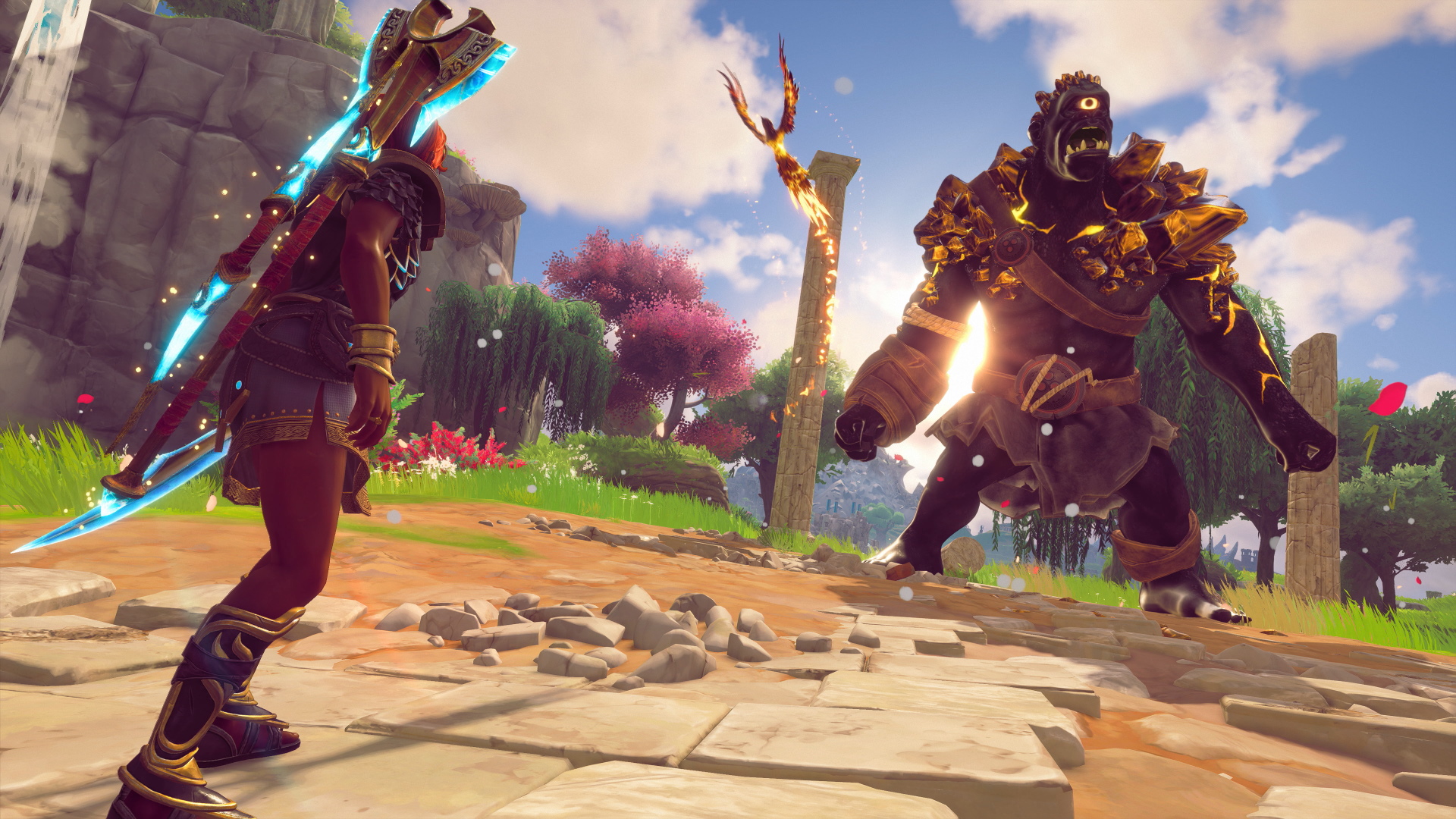 The visuals of Immortals is the most cartoony Ubisoft have got since Mario + Rabbids Kingdom Battle and I can imagine the large facial features and jovial tone putting some off. It feels like a game both I and my seven-year-old brother can enjoy which feels perfect for its December launch window. Immortals Fenyx Rising’s music is also pretty great, infusing Solemn piano with an anthemic string section and some great percussion. Hearing the echo of a choir upon entering a temple or the rush of drums during a fight adds a great deal to an otherwise normal process.

Despite its amalgamation of different genres, themes and gameplay, Immortals Fenyx Rising manages to staple different ideas together surprisingly well. Its traversal systems can directly flow into its combat, puzzle-solving can even be used in battle by breaking the right stones or throwing the right object, things just felt surprisingly smooth and this gives a nice sense of progression. There is a real skill ceiling and I felt like a much better player by the end of my time with it. Things like a hard optional boss and challenges really solidified that. From the four hours I got to play, Immortals offered very solid gameplay, rewarding systems and a fun sense of humour. Perhaps the tone could do with a tightening up and some of the humour could be a little stronger but I enjoyed every moment of gameplay. If they can back it up with another 20 hours like this, we’re sure to be in for a good surprise later on this year.