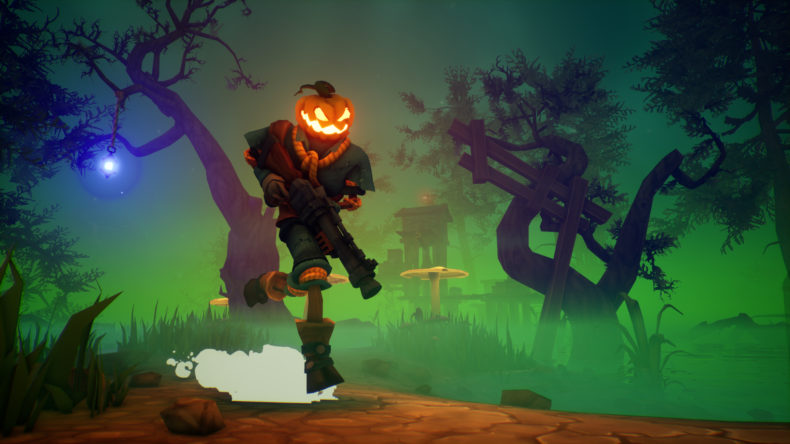 Fans of the classic 3d platformer have a new game to check out this month, when Pumpkin Jack comes to PS4 later this month. On the 24th, you’ll be able to explore the Halloween themed world of the Arc En Ciel Kingdom for yourself on whichever Sony console you’re rocking at the moment.

“Headup is thrilled to announce the PS4 release date of the comically creepy 3D platformer from solo-developer Nicolas Meyssonnier, Pumpkin Jack. It will make its way to PS4 on February 24, and will please both fans of all-time classics like MediEvil and Jak & Daxter as well as everybody who’s looking for an eerie and diversified game to play.

Pumpkin Jack is a spooky scary 3D platformer in which you embody Jack, the Mythical Pumpkin Lord. Dive into an epic adventure through otherworldly landscapes and help the Evil annihilate the Good.

Follow the will of the Devil himself and slay your nemesis in an epic quest that will take you on a journey in the Arc En Ciel Kingdom, a mythical realm shattered by the curse. You will meet friends along the way, from a haughty owl to a snarky crow!

Discover stunning atmospheres in a colorful yet spooky scary Kingdom. Travel through epic and dramatic settings, with each level having its own eerie atmosphere. Using a vibrant palette and high-quality lighting effects, Pumpkin Jack invents its own unique cartoon universe inspired by the classic PS2 graphic style, made with Unreal Engine 4.

Pumpkin Jack is a classic 3D Platformer before anything else! Every level will challenge you through several themed platforms, all giving you new trials to complete. You will have to master the arts of dodging, timing, and movement to vanquish Jack’s foes. During the dynamic real time battles, choose which weapon you want to use and strike at the critical moment!”

Pumpkin Jack looks entirely like my kinda game, so I’m gonna make sure to play it later this month. We don’t get a ton of 3d platformers nowadays, so getting an exciting new one inspired by the classics is really exciting.