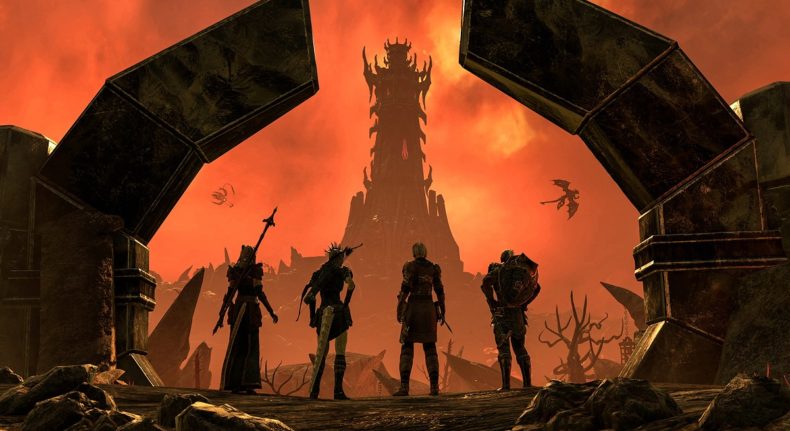 It’s easy to see why The Elder Scrolls Online has eluded people. The overwhelming nature of the content on offer is perhaps the biggest factor. However, once the realisation that TESO’s freedom is the most exciting reason to play, it offers so much in return. There are tons of expansions to play through. The locations are beautifully designed and full of things to do. Fighting isn’t everything in TESO. There’s crafting, housing, exploring, banking, and so much more. With the Flames of Oblivion DLC dropping earlier in the year, the focus is now on Blackwood. Coming in June, Blackwood offers plenty of content, including a new story and some exciting features.

With this year’s Gates of Oblivion yearlong adventure, ZeniMax has revisited Oblivion 800 years before the iconic game. The Daedric Prince Mehrunes Dagon is threatening all of Tamriel, and with it comes treachery, excitement, and plenty to uncover. Blackwood not only builds upon the story, but it also introduces some key areas to Tamriel, along with some new features. Players can now choose a companion to travel with, each with their own unique skills and traits. To say this is a welcoming feature would be an understatement.

Blackwood: The best story so far?

Now the obligatory introduction is over, it’s time to get into why Blackwood is shaping up nicely. The site was fortunate enough to be given full access to Blackwood, and it certainly feels like one of the biggest yet. Not just in terms of the new locations, such as the large city of Leyawiin and Gideon, but the story as well. It has an ambitious plot, from the seeds of Dagon’s influence in Tamriel to the mysterious Black Hand letters. There is so much at stake, and so many questions unanswered. Why are these assassinations taking place? What are the Four Ambitions? Why are The Order of the Waking Flame wreaking havoc? Why are the Gates of Oblivion open once more? 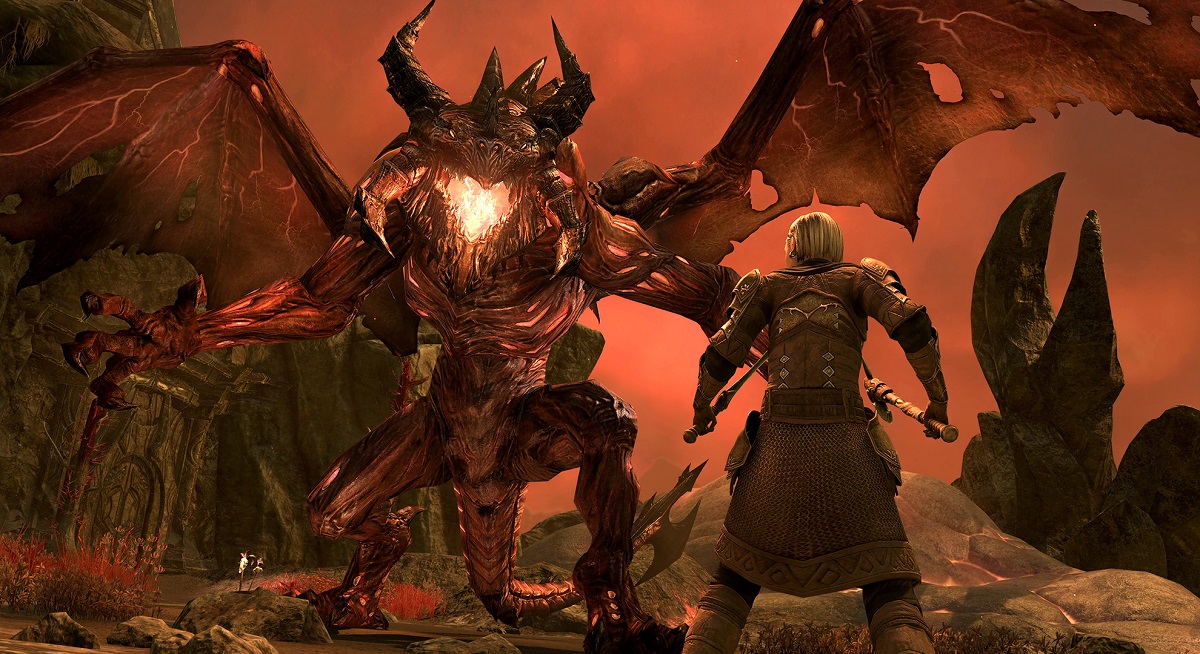 It would be great to share some of the big plot points, but that’s not very fair. All that will be said is players are going to enjoy every second. There is the usual level of dialogue fans are used to, but the writing is excellent. ZeniMax is hellbent on changing the landscape of Tamriel, and the main questline has been a blast so far. The characters are fleshed out with some great writing, from the councillors, to the Dark Brotherhood and beyond. Eveli Sharp-Arrow returns in Blackwood to aid players on quests, and her peppiness and positivity helps to keep the story somewhat light-hearted. She’s a great fighter as well, and when in the middle of a big fight, the wood elf is a big help.

The thrill of the fight

On the subject of fighting, Blackwood offers a big challenge when it comes to the types of enemies. Ghosts, skeletons, and wraiths flood underground chambers, whilst the Flame mercenaries come in all shapes and sizes. From mages to archers, combat provides a variety of tough challenges to overcome. One of the big fights sees you facing a demon that uses whirlwinds of fire, whilst another launches skulls at you followed by an army of ghouls. Each fight will be testing, but the rewards of success are worth it. 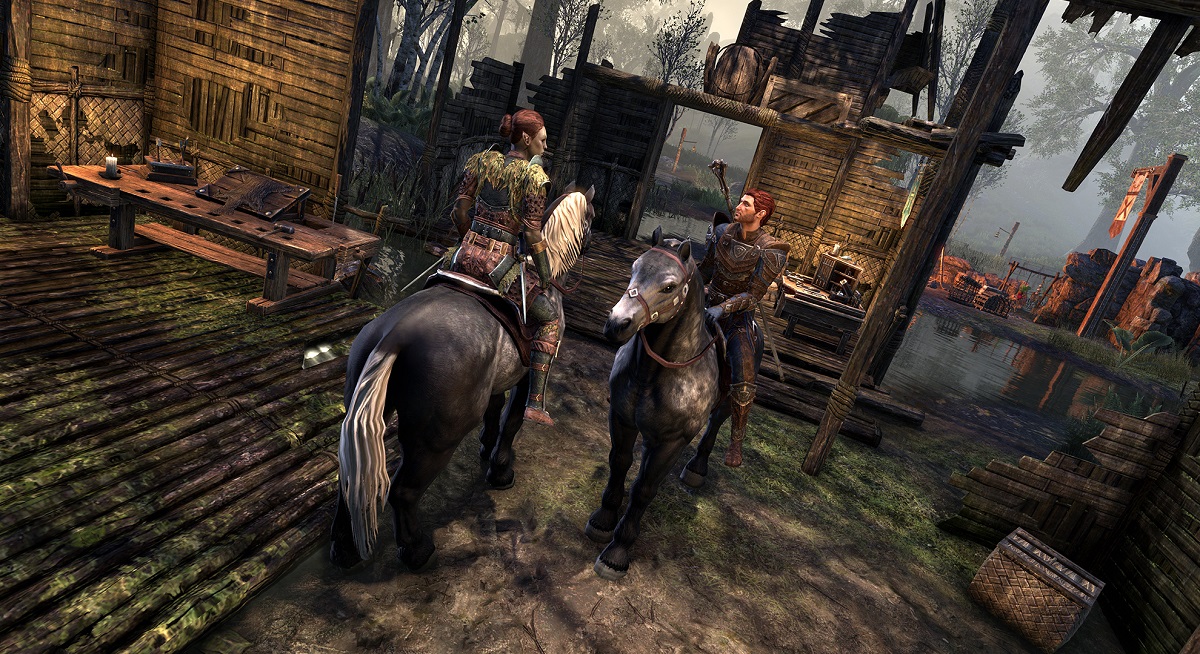 Companions are perhaps the major feature in Blackwood. Skills can be assigned, and gear can be collected and equipped to each one. Using companions in battle can have varying degrees of support. Both Bastian and Mirri can be healers, damage dealers, or tanks. After a couple of quests, companions can both be summoned whenever needed. Bastian and Mirri can die, but using a Soul Gem will counter death. Another cool feature is the Rapport system. In Blackwood, the option to learn about companion’s backstories pops up when talking, including each companion’s history and drives as a character. This can offer particular quests that can only be unlocked depending on your Rapport.

Blackwood is huge. The areas between the main locations are filled with fields and luscious forests. There are Sherwood Forest vibes, that’s for sure. Leyawiin itself looks incredible. From the outside, it is surrounded by huge walls. Once inside, the city is filled with detailed architecture and beautiful banners that drape down from the towers. Gideon is a little different, with marshy areas within the city that highlight a divide in the class level which exists in Blackwood. It’s easy to see how different these places are from the likes of Solitude and Vvardenfell.

With Blackwood releasing on next-generation consoles, the textures and design of the various environments are going to look stunning. On PC, it’s the best TESO has looked. Not only does it please the eyes, the soundtrack is once again top notch. The scores for The Elder Scrolls series has always been fantastic, and Blackwood’s is no different.

On top of Companions, a new story, and new environments, the other changes make a difference. Once hitting Level 50, the new streamlined Champion Points system helps manage where your Skill Points go. Spending them how you want increases the diversity of post-fifty levelling. Craft improves finding more gold or quicker fishing bites. Warfare increases max magicka and chances of critical hits. Fitness improves ally revival and max stamina. The true test will be to see how it affects the servers when they are full, as the intention is to provide less stress on them when Blackwood releases. 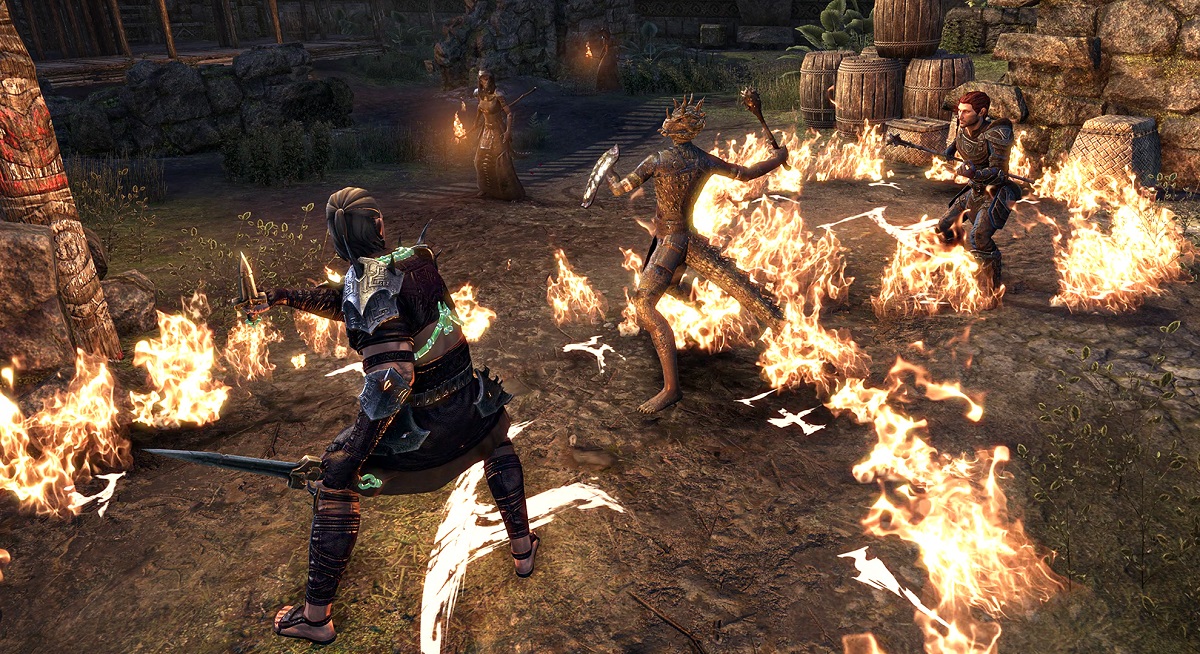 The Oblivion Portals are the new World Events, and offer players a chance to visit Oblivion. Unlike TES4, the protagonist heads to the heart of hell instead of the other way round. There are new Daily Quests to complete that offer rewards by spending the new currency solely earned from completing them. There’re also loads of new Delves that offer a range of enemies to fight, and feel different to the ones that have come before. Blackwood hits different, and when it launches I’m sure players will love just what ZeniMax has done to make it feel new.

The Elder Scrolls Online: Blackwood is brand new adventure that will enrapture fans with its ambitious narrative. Oblivion is one of the most loved games in the series, and revisiting it 800 years prior is so cool. Not only is the story interesting, but the Companions offer soloists a chance to have some back-up in a fight. The inclusion of Companions works well. It isn’t a throwaway feature, but an important one. The streamlined Champion Points system is both dense and simple, and getting used to the three new trees doesn’t take long at all. I honestly can’t wait to take my own player into Blackwood and play through the whole Chapter.

Video games are cool. Don't let anybody tell you any different.
MORE LIKE THIS
bethesdaBlackwoodPreviewThe Elder Scrolls Online