previous
What to expect from a new Mario Kart game
random
next
Collector bonuses in Red Dead Online, plus details on next update.
0 comments 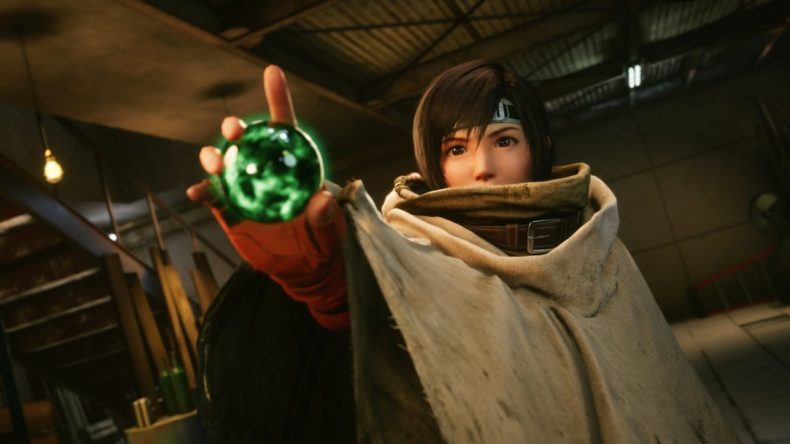 It’s finally here, the Final Fantasy 7 Remake Intergrade Yuffie DLC is available for all. This means we fans can finally get another character on our consoles in the first part of the FF7 Remake. And along with the PS5 upgrade, let us tell you, the game looks and plays great now. Called “intermission” the new piece of content is two episodes long not part of the main game.

But that’s an important thing to take note of, because the Final Fantasy 7 Remake Intergrade Yuffie DLC is completely separate from the main game. Here’s how you access it whether you have a save from the PS4, or not!

The first thing to do is upload your old saves. If you are playing the game for the first time on PS5, you can ignore this section. The rest of you will need to update your PS4 version, which you can download on PS5 as well. Once downloaded, make sure you have updated the game to the latest version. You’ll notice that a new option is available called “Upload Save Data”. 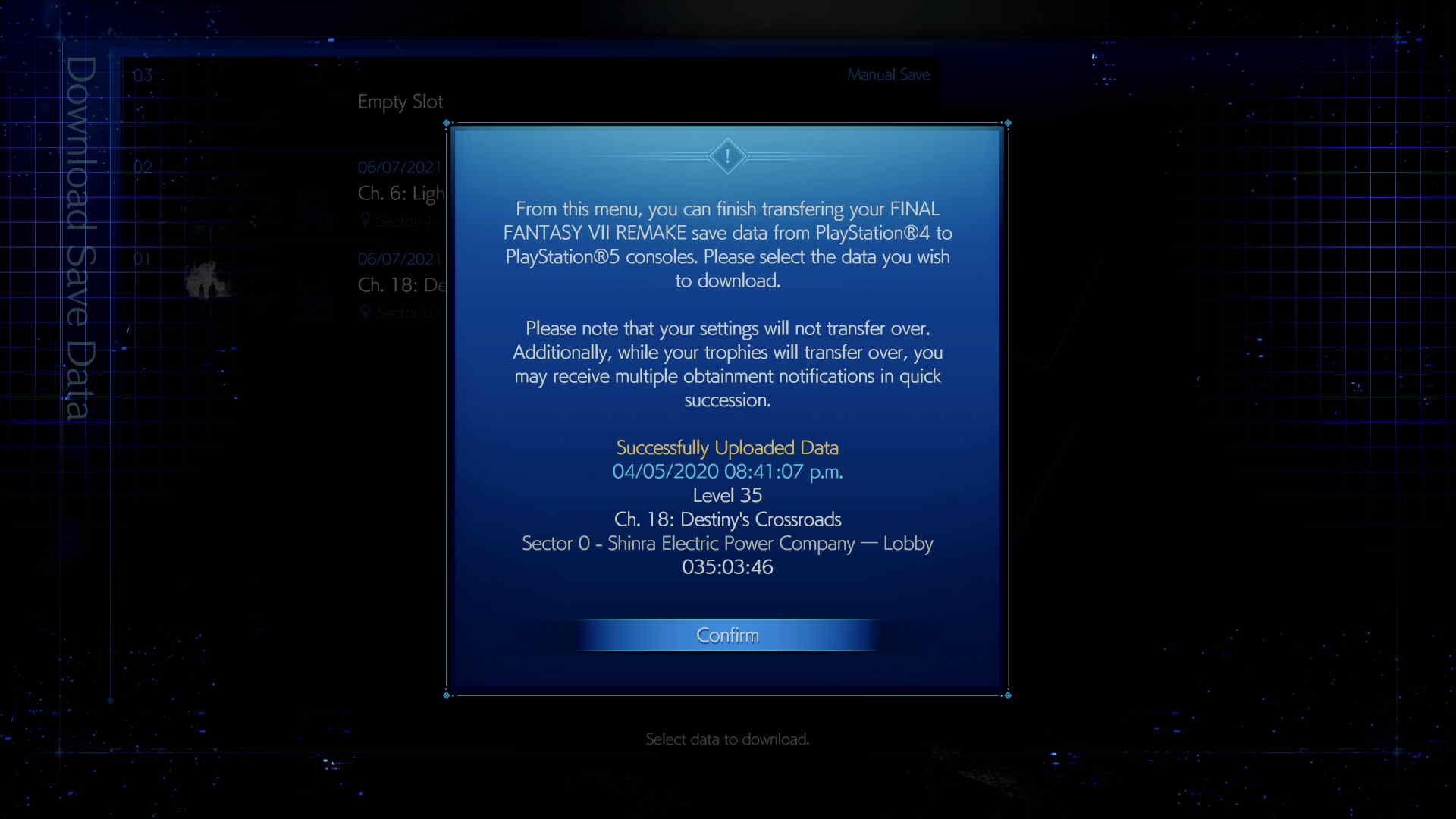 Once you’ve done this, you can delete the PS4 version from your hard drive. This’ll free up nearly 100GB of data, so don’t forget to do it later if you don’t do it right away. Back to the PS5 version, you’ll need to download your saves. There’s an option on the main menu for this, and it’s the same process as uploading. Only, well, you’re downloading stuff.

That main menu is your friend

The easiest way to access INTERmission it to hit R2 on the main menu once you have the DLC downloaded. 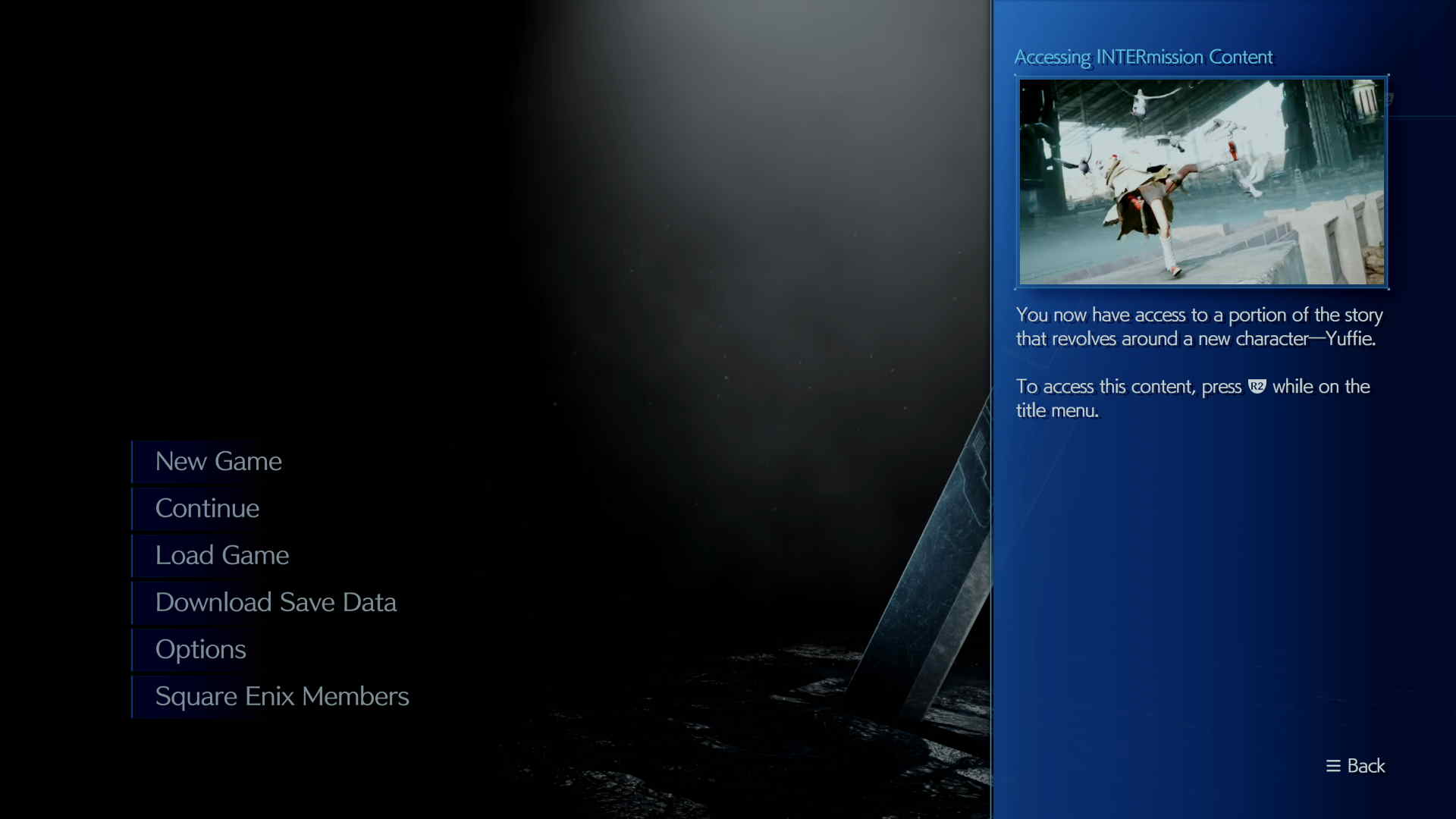 Doing so will bring you to the main menu of INTERmission. That’s Yuffie’s two chapter story accessible. But if you’re mid-playthrough, there’s another way to do it. 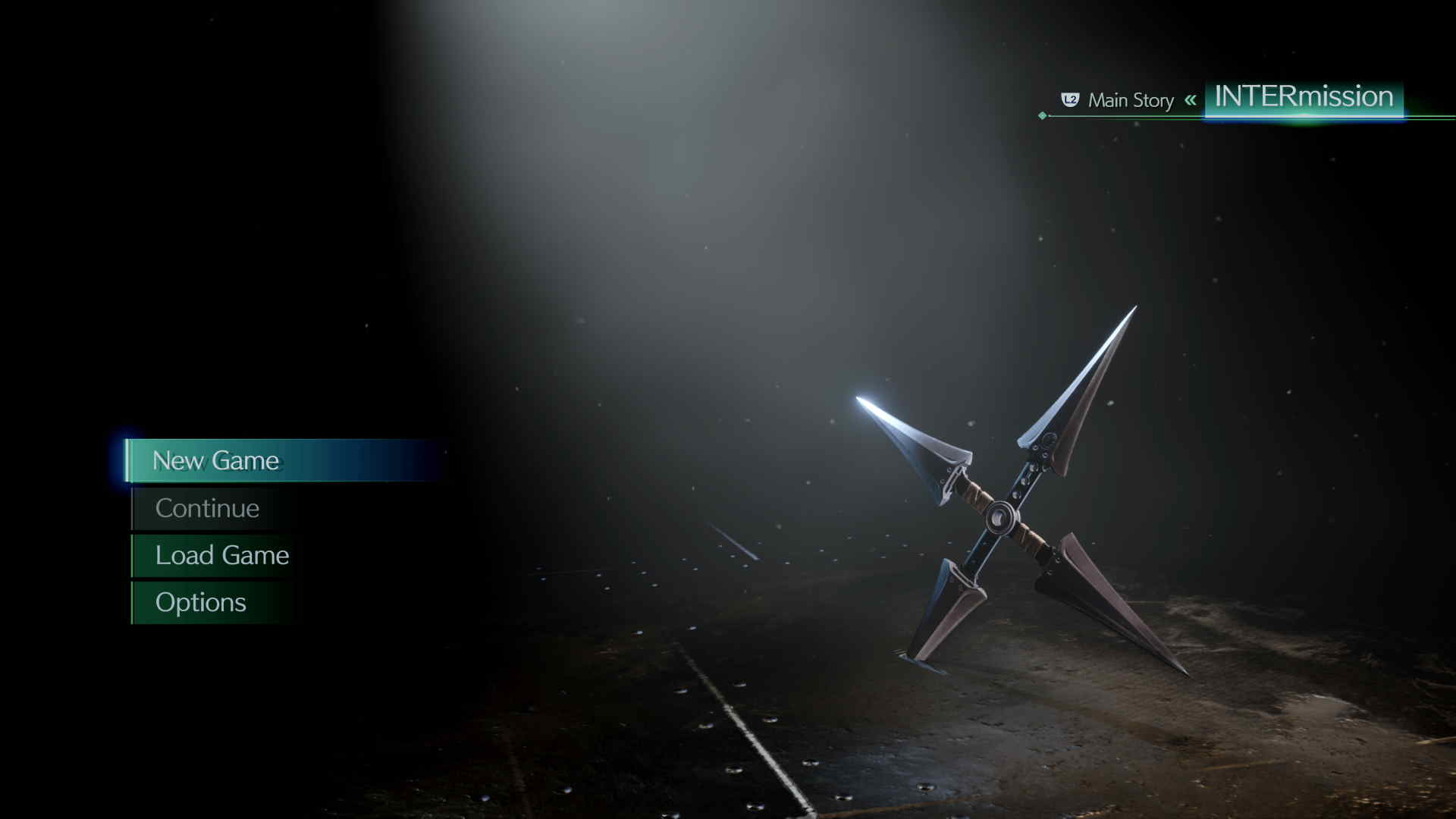 Once in a game, head to the main menu by hitting the “Start / Options” button. Here, down at the bottom you’ll find an option called “Additional Episode”. 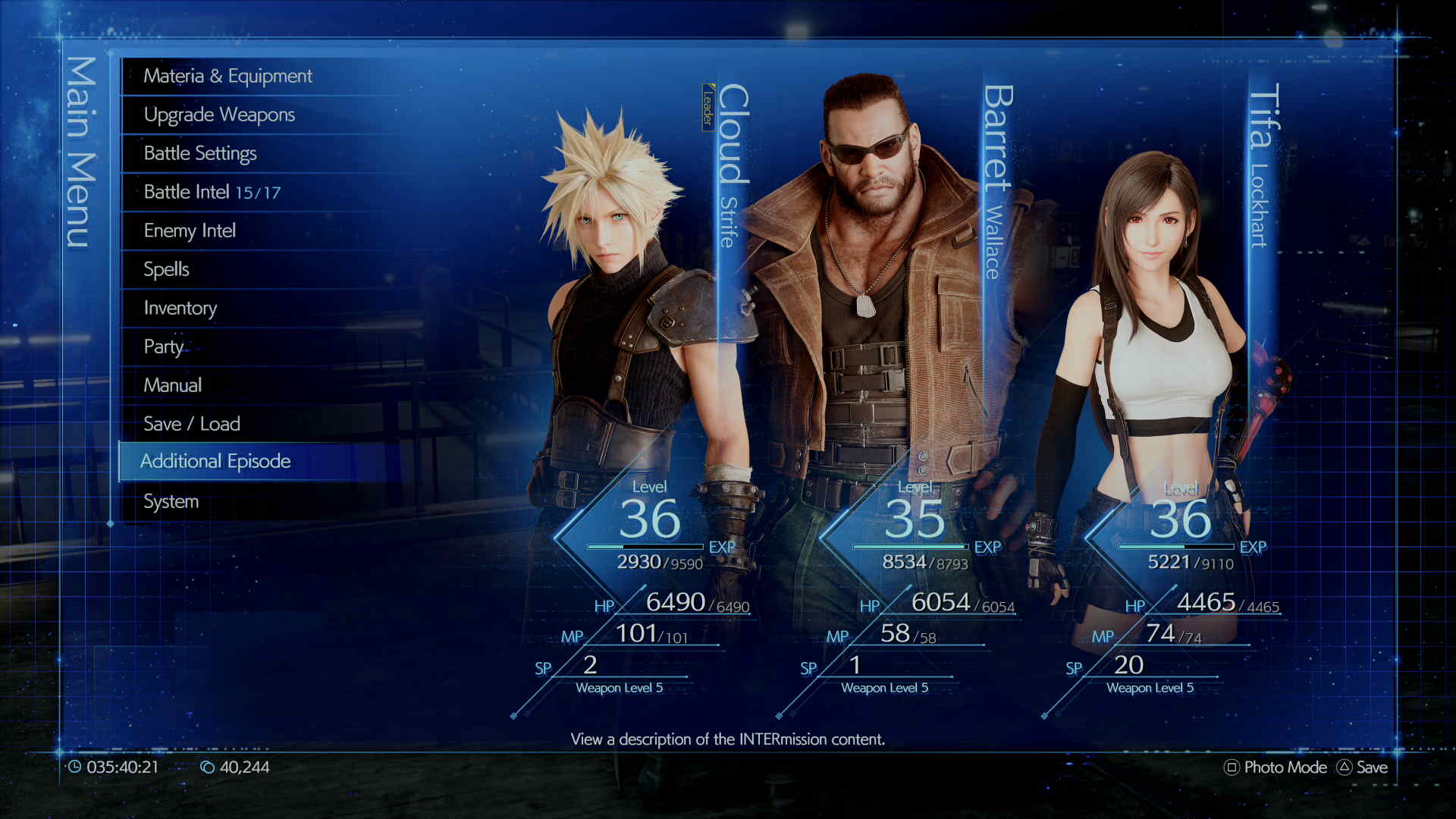 If you haven’t already bought it, you can grab it here. There’s also an option to redeem a voucher code if you have one of those for some reason. It’s just over 9GB in size, if you’re wondering. 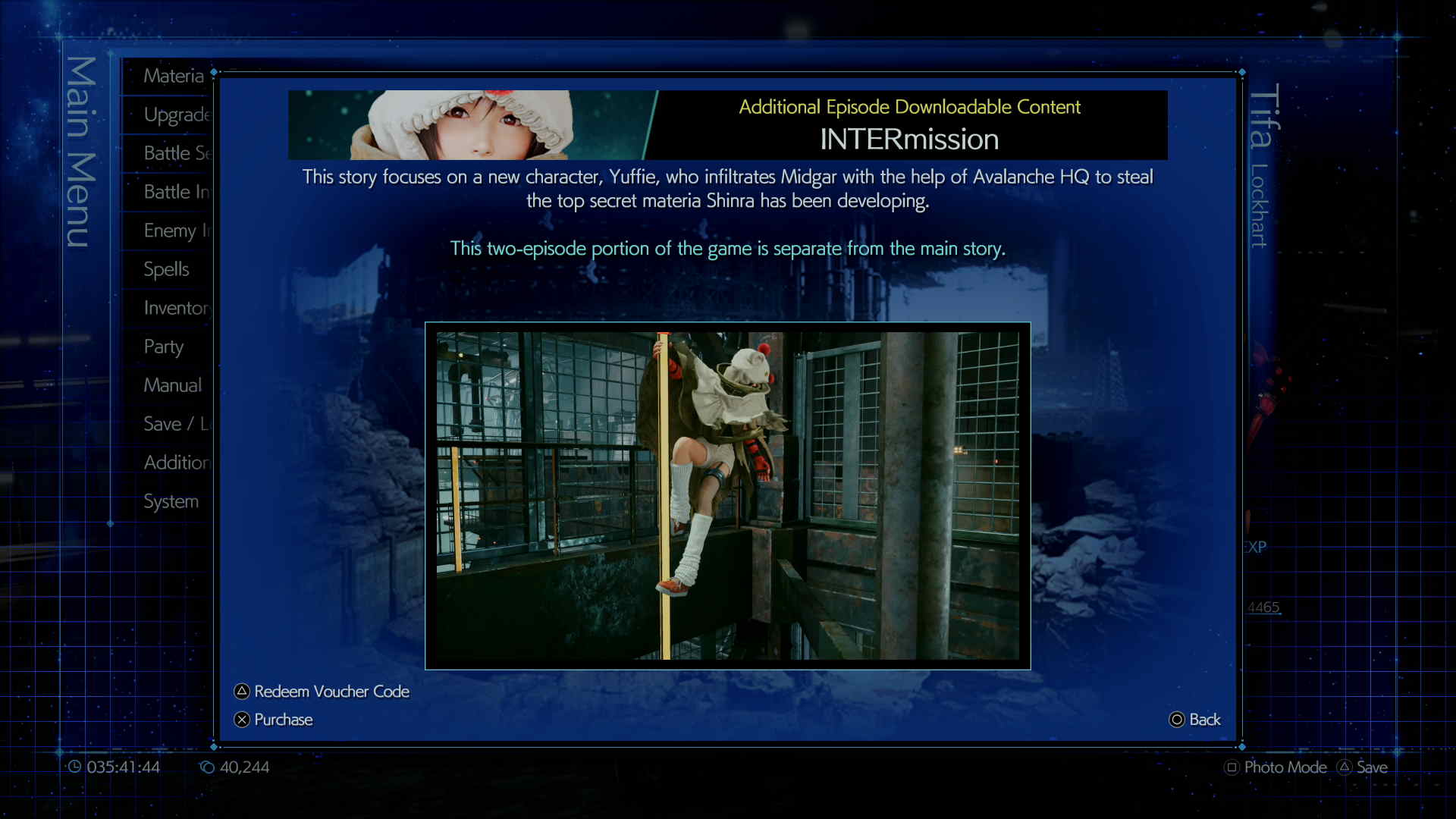 But assuming you already have the INTERmission additional episode purchased, it’s very simple. You can start the DLC from here, and play as our favourite spy/agent, with the name nobody pronounces properly. It’s Yuff-ee, right? No… oh well, we’re on our own there, then.